We shall now examine the fate of the pyruvate produced as the end-product of glycol-ysis. As we have seen, this depends on whether the organism in question is aerobic or anaerobic.

We shall now examine the fate of the pyruvate produced as the end-product of glycol-ysis. As we have seen, this depends on whether the organism in question is aerobic or anaerobic.

You will recall that during glycolysis, NAD+ was reduced to NADH. In order for glu-cose metabolism to continue, this supply of NAD+ must be replenished; this is achieved either by respiration or fermentation. Respiration is the term used to describe those ATP-generating processes, aerobic or anaerobic, by which oxidation of a substrate occurs, with an inorganic substance acting as the final electron acceptor. In aerobic respira-tion, that substance is oxygen; in anaerobic respiration, a substance such as nitrate or sulphate can fulfil the role. 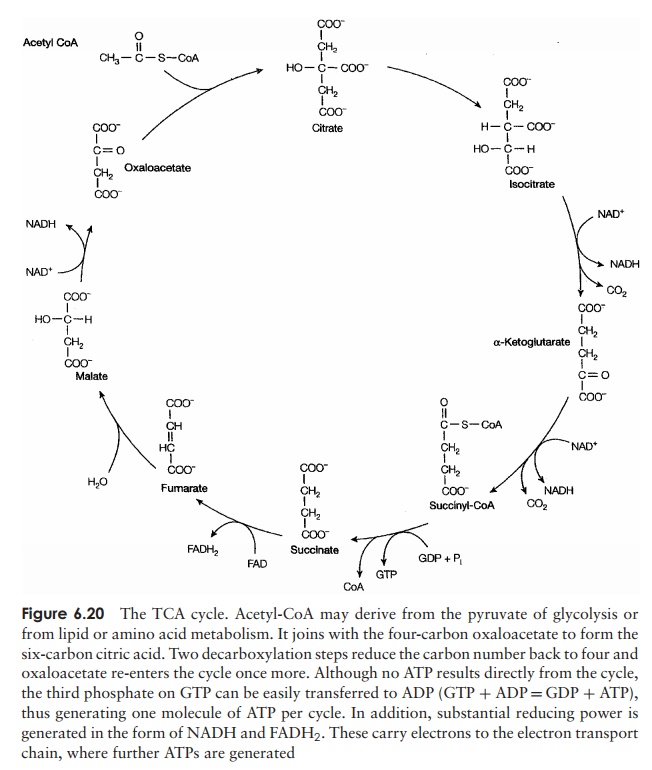 In most aerobic organisms, the pyruvate is completely oxidised to CO2 and water by entering the tricarboxylicacid (TCA) cycle, also known as the Krebs cycle or sim-ply the citric acid cycle (Figure 6.20). During this cycle, a series of redox reactions result in the gradual transfer of the energy contained in the pyruvate to coenzymes (mostly NADH). This energy is finally conserved in the form of ATP by a process of oxidative phosphorylation. We shall turn our attention to these important reactionsin due course, but first let us examine the role of the TCA cycle in a little more detail. Pyruvate does not itself directly participate in the TCA cycle, but must first be con-verted into the two-carbon compound acetyl-Coenzyme A:

This is an important intermediate, as lipids and amino acids can also be metabolised into this form, and thereby feed into the TCA cycle. The main features of the cycle are as follows:

·              four of the reactions involve substrate oxidation, with energy, in the form of electrons, passing to form NADH (mainly) and FADH

·              one reaction involves the generation of ATP by substrate-level phosphorylation.

For each ‘turn’ of the citric acid cycle, one molecule of ATP, three molecules of NADH and one molecule of FADH2 are produced (FADH2 is the reduced form of another coenzyme, FAD). Since these derive from oxidation of a single acetyl-CoA molecule, we need to double these values per molecule of glucose originally entering glycolysis.

So far, we are a long way short of the 38 molecules of ATP per molecule of glucose mentioned earlier; we have only managed two ATPs from glycolysis and a further two from the TCA cycle.

Where do all the rest come from? Most of the energy originally stored in the glucose molecule is now held in the form of the reduced coenzymes (NADH and FADH2) produced during glycolysis and the TCA cycle. This is now converted to no less than 34 molecules of ATP per glucose molecule by oxidative phosphorylation in the remaining steps in aerobic respiration (three from each molecule of NADH and two from each of FADH2). 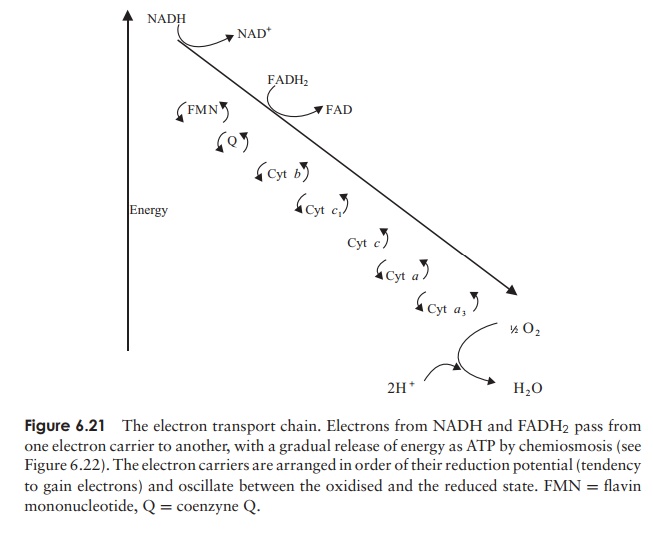 In the final phase of aerobic respiration, electrons are transferred from NADH and FADH2, via a series of carrier molecules known collectively as the electrontransport (or respiratory) chain to oxygen, the terminalelectron acceptor (Figure 6.21). This in turn is reduced to the molecules of water you will remember from our overall equation. In procaryotes, this elec-tron transfer occurs at the plasma membrane, while in eucaryotes it takes place on the inner membrane of mitochondria. Table 6.2 summarises the locations of the reactions in the different phases of carbohydrate metabolism.