Even more than in DNA synthesis, it is sensible for cells to regulate RNA synthesis at the initiation steps so that the elaborate machinery involved in independently regulating thousands of genes need not be built into the basic RNA synthesis module.

Even more than in DNA synthesis, it is sensible for cells to regulate RNA synthesis at the initiation steps so that the elaborate machinery involved in independently regulating thousands of genes need not be built into the basic RNA synthesis module. Once RNA synthesis has been initiated, it proceeds at the same average rate on most, independent of growth conditions. Can this be demonstrated? Another need for knowing the RNA elongation rate is in the interpretation of physiological experiments. How soon after the addition of an inducer can a newly synthe-sized mRNA molecule appear? 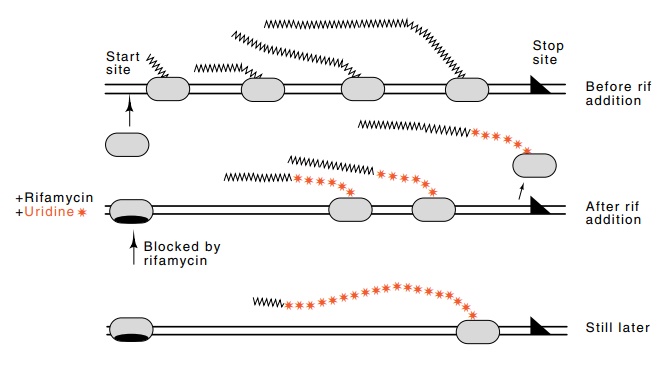 The measurement used rifamycin, an antibiotic that inhibits RNA polymerase only at the initiation step. It has no effect on RNA polym-erase molecules engaged in elongation. Rifamycin and radioactive urid-ine were simultaneously added to bacteria; thus only those RNA chains that were in the process of elongation at the time of the additions were radioactively labeled, and no new ones could be initiated (Fig. 5.1). At various times after the rifamycin and uridine addition, samples were taken from the culture and their RNA was separated according to size

Figure 5.2 Structure of the ribosomal RNA operon used to determine the RNAelongation rate in E. coli.

by electrophoresis on polyacrylamide gels. Suppose that a specific species of RNA molecule is well separated from all other species by the electrophoresis. Then, the radioactivity in this size class will increase with time for as long as RNA polymerase molecules transcribe the corresponding gene, but once the last polymerase molecule to initiate has crossed the region, there can be no additional increase in radioac-tivity. The interval between the addition of rifamycin and the end of the period over which radioactivity increases is the time required for an RNA polymerase molecule to transcribe from the promoter to the end of the transcribed region.

The interval between the time of rifamycin addition and the time at which the last RNA polymerase molecule transcribes across the end of the 5S gene is the time required for RNA polymerase to transcribe the 5,000 bases from the promoter to the end of the ribosomal gene com-plex. This time is found from the radioactive uridine incorporation measurements. Transcription across the 5S gene ends when the radio - activity in 5S RNA stops increasing. This happens about 90 seconds after rifamycin and uridine addition (Fig. 5.3). This yields an elongation rate of about 60 nucleotides per second. This type of elongation rate meas-urement has been performed on cells growing at many different growth rates, and as expected, the results show that the RNA chain growth rate is independent of the growth rate of cells at a given temperature.