One of the first steps of transcription is the binding of RNA polymerase to the proper sequence on the DNA.

One of the first steps of transcription is the binding of RNA polymerase to the proper sequence on the DNA. The best evidence at present supports the notion that RNA polymerase reads the sequence of the DNA and identifies the promoter in a double-stranded unmelted structure. It is theoretically possible that the bases of the growing RNA could be specified by double-stranded unmelted DNA, but it seems vastly easier for these bases to be specified by Watson-Crick base pairing to a partially melted DNA duplex.

Direct experimental evidence shows that during the initiation proc-ess, RNA polymerase melts at least 11 base pairs of DNA. For example, positions on adenine rings normally occupied in base pairs become available for chemical reaction if the pairs are disrupted, and their exact positions along a DNA molecule can then be determined by methods analogous to those used in DNA sequencing. Results obtained from this type of measurement reveal that 11 base pairs of DNA from about the middle of the Pribnow box to the start site of transcription are melted when the RNA polymerase binds to a promoter.

A different method has also been used to measure the amount of DNA that is melted by the binding of RNA polymerase. This method consists of binding RNA polymerase to a nicked circular DNA molecule, sealing the nick with polymerase still bound, and determining the change in the supercoiling generated by the presence of the polymerase. If we assume that the melted DNA strands are held parallel to the helix axis, this method yields 17 base pairs melted. The problem is that no method has been developed to determine whether the melted region contains any twist. If it does, then the size of the region that is melted cannot be precisely determined (Fig. 4.23). 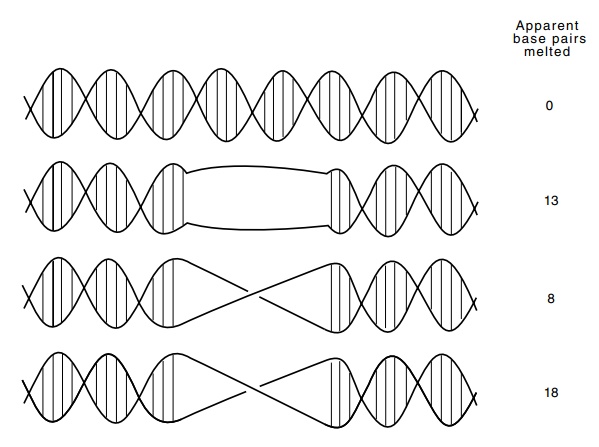 Figure 4.23 Topological measurements cannot give the exact number of basepairs opened by binding of a protein. In each of the three cases, 13 base pairs are broken, but only if the melted region is not twisted does the DNA contain one less twist.

The melting of 10 to 15 base pairs of DNA under physiological conditions requires appreciable energy because this length of oligomers hybridize together with a very high binding constant. The tight hybridi-zation derives from the same source that pushes DNA to the double helical structure, base stacking interactions and hydrogen bonds. Since a large amount of energy is required to melt the DNA and a limited amount of energy is available from the binding of RNA polymerase, thermal motion in the solution provides the activation energy for the melting. Once this occurs, polymerase binds tightly to parts of the separated strands and maintains the bubble. At low temperatures, and therefore lower thermal motion, an RNA polymerase-DNA duplex is much less likely to possess the requisite activation energy, and the melting rate at lower temperatures is much reduced. At 0° virtually no RNA polymerase bound to phage T7 DNA is able to initiate in reasonable periods of time, while at 30° almost 100% has isomerized and is able to initiate within a few minutes. Similarly, the melting rate is affected by the salt concentration.