Steps of the Initiation Process

Steps of the Initiation Process

The beginning state for initiation by RNA polymerase is a polymerase molecule and a promoter free in solution, and the end state is a polymerase molecule bound to DNA elongating an RNA chain. In this state the DNA is partially melted so that base-pairing of ribonucleotides to the template strand of the DNA can be used to determine the nucleotides to be incorporated into the RNA. The initiation process that separates the two states must be continuous, but it may well be approxi-mated as consisting of discrete steps. Can any of these be detected and quantitated and, if so, can measurement of the rates of proceeding from one such state to the next during the initiation process provide useful information? Ultimately we would hope that studies like these could explain the differences in activities between promoters of different sequence as well as provide the information necessary to design pro-moters with specific desired activities or properties.

The first biochemical characterizations of the binding and initiation rates of RNA polymerase on promoters were performed on highly active promoters of bacterial origin. Such a choice for a promoter is natural because it maximizes the signal-to-noise ratio in the data. The data 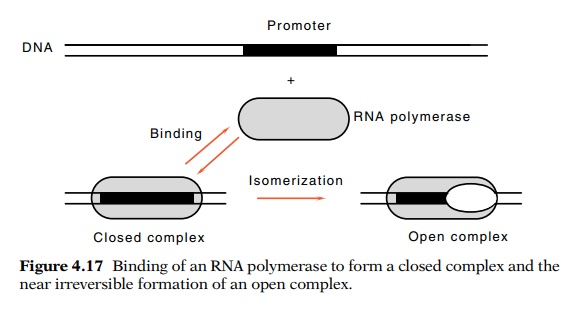 Figure 4.17 Binding of an RNA polymerase to form a closed complex and thenear irreversible formation of an open complex.

obtained by Chamberlin with these promoters indicated that the initia-tion process could be dissected into two steps: a rapid step during which polymerase binds to DNA and a slower “isomerization” step in which RNA polymerase shifts to an active form capable of immediately initi-ating transcription (Fig. 4.17). Later studies on a wide variety of pro-moters indicates that this approximation is generally useful. Some promoters possess additional discernible steps in the initiation process.

It is natural to expect that the first step would be the point for regulation of transcription. Since cells need to have promoters of widely differing activity as well as promoters whose activities can be controlled, it seems sensible that the binding step would vary among promoters, and if auxiliary proteins are required for initiation at a promoter, they would alter the binding rate. If the regulation of initiation by auxiliary proteins occurred after the binding step, for example in the isomeriza-tion step, then many polymerase molecules in cells would be nonpro-ductively bound at promoters. This would be a waste of substantial numbers of polymerase molecules. Apparently we lack important infor-mation, for nature actually has it both ways. Some weak promoters have good binding of polymerase, but slow isomerization, whereas the re-verse is true with others. Similarly, on some regulated promoters regulation is at the binding step, and on others the regulation occurs at the isomerization step or at a step subsequent to isomerization.