Some enhancer-binding proteins like the glucocorticoid receptor protein have been purified and studied in vitro.

Some enhancer-binding proteins like the glucocorticoid receptor protein have been purified and studied in vitro. Other enhancer-binding proteins, like the GAL4 and GCN4 proteins from yeast, can be engineered and studied in vivo without ever purifying the protein. Both types of studies indicate that enhancer proteins possess multiple independent domains. The DNA-binding domain of the GAL4 enhancer protein can be replaced with the DNA-binding domain of a bacterial repressor protein, LexA (Fig. 4.14). When the LexA-binding sequence is placed in front of some other yeast gene, the gene acquires the ability to be induced by the GAL4-LexA hybrid protein when galactose is present. The glucocorticoid receptor protein possesses DNA-binding, steroid-binding, and activation domains. These too can be separated and interchanged.

The regions of enhancer proteins necessary for activation can be explored. By progressively deleting protein from an activating domain, both Ptashne and Struhl have found that stretches of negatively charged amino acids on some activator proteins are required for activation. In 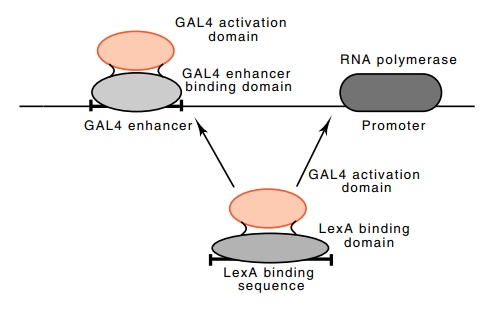 Figure 4.14 Hybrid enhancer proteins can activate transcription if they areheld in the right areas of DNA.

GCN4, two such regions are required for full activation abilities. It appears necessary that these negatively charged amino acids all lie on one face of an alpha helix. The other side of the helix can be hydropho-bic. Activating helices can be designed de novo if they follow these principles, but if the charged amino acids are shuffled, they do not activate. Other structures in addition to negatively charged surfaces of α-helices also function to activate RNA polymerase. Some enhancer-binding proteins lack significant negatively charged regions and instead possess large quantities of proline or glutamine.

Many enhancer proteins may be relatively simple. They can possess nearly independent domains for DNA-binding, for binding a small molecule like a hormone, and for activating RNA polymerase or the basal machinery. The binding of a hormone may unmask the DNA-bind-ing domain or the activation domain of the protein. In some cases the activating domain may be little more than a high concentration of negative charge whose interaction with TFIID activates transcription.

The number of different enhancer-binding proteins appears to be remarkably small in nature. Repeatedly, researchers are finding that some of the enhancer proteins from one gene are highly similar to one that controls another gene, either in that same organism or in a different organism. Not only are the sequences of such proteins similar, but they are functionally interchangeable. Heterologous in vitro transcription systems can be constructed in which enhancer proteins from yeast activate transcription from a human system. The yeast GCN4 protein is similar to the AP-1, c-myc, c-jun, and c-fos proteins. AP-1 is a mammalian protein that binds upstream from promoters, and c-myc, c-jun, and c-fos are proteins that sometimes mutate and induce oncogenic growth of cells.

Figure 4.15 Enhancer proteins can interact with the TFIID complex directlyor through other proteins, shown in red.

Many of the enhancer-binding proteins interact with the TFIID complex. Because gene regulation is so important to the cell and because many different genes in a cell must be regulated, we can expect a wide diversity of interaction modes (Fig. 4.15). The enhancer-binding proteins can interact directly, via adapters, or in cooperation with coadapters. Additionally, proteins that are part of the TFIID complex or the other proteins may be required for some interactions and interfere with others. That is, a protein may play an activating role in the expression of some genes and a repressing role in the expression of others.