Multiple but Related Subunits in Polymerases

How can one be sure that an enzyme contains multiple subunits? One of the best methods for detection of multiple species of polypeptides in a sample is electrophoresis through a polyacrylamide gel.

Multiple but Related Subunits in Polymerases

How can one be sure that an enzyme contains multiple subunits? One of the best methods for detection of multiple species of polypeptides in a sample is electrophoresis through a polyacrylamide gel. If the protein has been denatured by boiling in the presence of the detergent sodium dodecyl sulfate, SDS, and the electrophoresis is performed in the pres-ence of SDS, polypeptides separate according to size. This results from the fact that the charged SDS anions that bind to the polypeptides completely dominate the charge as well as force all polypeptides to adopt a rodlike shape whose length is proportional to the molecular 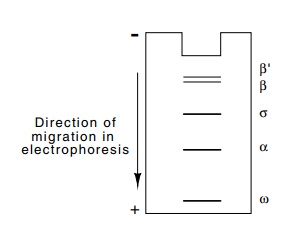 weight of the protein. Therefore, in most cases two polypeptides of the same size will migrate at the same rate and two of different molecular weight will migrate at different rates. Following electrophoresis, the positions of proteins in the gel can be visualized by staining. Each band on a gel derives from a different-sized polypeptide species.

When purified E. coli RNA polymerase is subjected to SDS polyacry-lamide gel electrophoresis, five distinct bands are seen (Fig. 4.8). The mere presence of multiple polypeptides in purified enzyme doesn’t prove that all the peptides are necessary for activity. Do all the bands on the gel represent subunits of RNA polymerase or are some of the bands extraneous proteins that adventitiously copurify with RNA po-lymerase? A reconstitution experiment provides the most straightfor-ward demonstration that the four largest polypeptides found in RNA polymerase are all essential subunits of the enzyme. The four bands from an SDS polyacrylamide gel are cut out, the proteins eluted, and SDS removed. RNA polymerase activity can be regained only if all four of the proteins are included in the reconstitution mixture.

RNA polymerase from E. coli consists of subunits β’ and β of molecu-lar weights 155,000 and 151,000, two subunits of α whose molecular weight is 36,000, a low molecular weight subunit ω whose presence is not necessary for activity, and one somewhat less tightly-bound subunit, σ of 70,000 molecular weight. Measurement of the amounts of each ofthe five proteins on SDS polyacrylamide gels shows that the enzyme contains two copies of the α subunit for every single copy of the others, that is, the subunit structure of RNA polymerase is σα2ββ’ω.

The reconstitution experiments permit pinpointing the actual target of rifamycin. RNA polymerase from rifamycin-sensitive and rifamycin-resistant cells is subjected to SDS polyacrylamide gel electrophoresis. Then reconstitution experiments with the two sets of proteins can be performed in all possible combinations to determine which of the four subunits from the rifamycin-resistant polymerase confers resistance to the reconstituted enzyme. The β subunit was found to be the target of rifamycin.

If we view the RNA polymerase as a biochemical engine, then it is reasonable to expect each subunit to have a different function. As discussed below, rifamycin inhibits initiation by RNA polymerase, but it has no effect on the steps of elongation of the polynucleotide chain.

A different antibiotic, streptolydigin, has also been found to inhibit RNA polymerase. This blocks elongation steps, and therefore we might have expected to find a subunit other than β to be the target of this drug. Alas, however, the β subunit is also the target of streptolydigin. Some spe-cialization exists. The β subunit binds ribonucleotides and possesses the catalytic site while the β’ subunit binds DNA. Most likely the larger two subunits are comprised of a number of domains, each playing a different role in the initiation and elongation of RNA. Evolution seems to have conserved the structures and functions of some of these different do-mains. The larger subunits from prokaryotic and the three types of eukaryotic RNA polymerase all share significant homology. Regions of homology are also found amongst the other subunits as well.

The combined molecular weights of the subunits of RNA polymerase total nearly one half million, but from a mechanistic viewpoint it is not at all clear why the polymerase should be so large. Phage T7, which grows in E. coli, encodes its own RNA polymerase, and this enzyme has a molecular weight of only about 100,000. Apparently the actual RNA initiation and elongation steps do not require an enzyme as large as the E. coli polymerase. Perhaps the large size of the cellular polymerasespermits them to initiate from a wider variety of promoters and to interact with a variety of auxiliary regulatory proteins.

The eukaryotic polymerases contain more subunits than the E. coli RNA polymerases. Part of the differences may merely be in the tightness with which subunits cling together. For example, a protein from E. Coli that is involved with RNA chain termination, the nusA gene product, could be considered a part of RNA polymerase because it binds to the polymerase after initiation has occurred and after the σ subunit has been released from the core complex of β, β’, and α. Since however, it does not copurify with the RNA chain elongating activity that is con-tained in the core, it usually is not classified as part of RNA polymerase. Some of the peptides in the eukaryotic polymerase might just stick together more tightly.

One notable difference between the prokaryotic and eukaryotic po-lymerases is that the largest subunit of RNA polymerase II possesses at its C-terminal end a heptad of (Tyr-Ser-Pro-Thr-Ser-Pro-Ser) repeated 25 to 50 times. This C-terminal domain, or CTD, can be multiply phosphorylated by any of several proteins known to activate transcrip-tion on various promoters. It appears that the unphosphorylated form of the CTD helps RNA polymerase bind and interact with the auxiliary

proteins necessary for transcription initiation, but that the CTD must be phosphorylated before it can release from the initiation proteins and allow the polymerase to elongate freely. Cells constructed so as to lack the CTD, or cells in which the CTD is too short are sick or inviable.