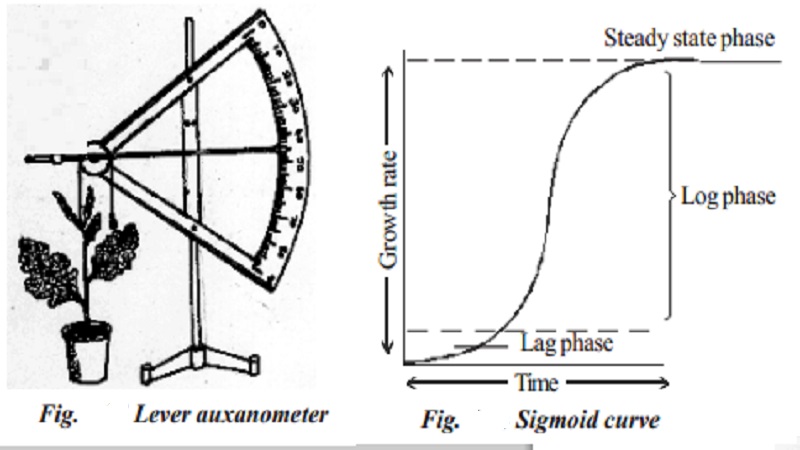 Growth is one of the most fundamental and conspicuous characteristics of living organisms. Growth may be defined as an irreversible increase in mass, weight and size of a living organisms. In most cases, it results in increase in dry weight and the amount of protoplasm. Growth in higher plants includes cell division, enlargement and differentiation.

Growth is one of the most fundamental and conspicuous characteristics of living organisms. Growth may be defined as an irreversible increase in mass, weight and size of a living organisms. In most cases, it results in increase in dry weight and the amount of protoplasm. Growth in higher plants includes cell division, enlargement and differentiation. Increase in the number and size of cells by itself cannot account for the development of an organized plant. For example, when a seed is sown, it does not become a larger seed but it grows as a seedling. Thus, growth is always accompanied by differentiation. Differentiation is the transformation of identical cells into different tissues. Depending upon the various structural, functional and physiological needs of the plant the tissues are of different types. Growth and differentiation results in development, which leads to gross form of the plant. Meristematic cells present in the plant body viz., root,

The growth in length of the plant is due to the meristematic activity of the apical meristems that takes place in the root and shoot apices. Whereas increase in thickness of stem and root is due to the activity of lateral meristem. You have already learnt in chapter 2 about different types of meristems. The period of growth is generally divided into three viz., formation, elongation and maturation. In the first phase, new cells are continuously formed by the apical meristem. In the second phase known as phase of elongation, the newly formed cells enlarge in size. In the third phase, phase of maturation, cells start maturing to attain permanent size and form.

The rate of plant growth is slow in the initial stages and this phase is called lag phase. It is followed by a rapid growth phase called log phase. In the third and final phases, the growth slows down and the organism maintains the size it has already attained. This phase is known as stationary phase or steady state phase. The growth in size or increase in number of cells if plotted against time the graph shows 'S' shaped curve known as sigmoid growth curve as shown in the figure.

In the annual plants the last phase i.e. steady state phase is followed by senescence i.e. arrest of growth and death. However, in the case of large trees each growing season exhibits a sigmoidal pattern of growth.

You have already known that the growth in length of the plant is due to the activity of the apical region of shoot and root. So in any plant the growth in length can be measured in ordinary measuring scale at an interval of time. For precise measurement, an instrument called 'Lever Auxanometer' is used. It measures the rate of growth of plant in terms of

short length. The auxanometer consists of a movable pointer attached to a pulley and a graduated arc fixed to a stand. A thread passes around the pulley. One end of the thread is tied to the growing tip of the potted plant. The other end is tied to a small weight. As the plant grows in length the pulley rotates and needle attached to the pulley moves down the scale. From this, growth in length of the plant can be measured at a given interval of time.

The actual growth in the length of a plant is measured as follows.

The growth of a plant is regulated through gene action and environmental conditions. There are substances, which are produced by plants themselves, which regulate their growth and many physiological and biochemical activities. These are called plant growth substances. Regulation of plant growth through chemical mechanisms frequently involves certain molecules known as hormones.

Based on the origin and biological activities plant growth substances are grouped into three - growth regulators, phytohormones and growth inhibitors.

It is a hormone like synthetic organic compound. In small amounts, it modifies the growth and development either by promoting or inhibiting the growth. eg. Naphthalene acetic acid (NAA).

These are organic substances produced by the plant. They are active in very minute quantities. They are synthesised in one of the parts of the plant and translocated to another part where they influence specific physiological, biochemical and morphological changes. The phytohormones are broadly grouped under five major classes namely auxins, gibberellins, cytokinins, ethylene and abscisic acid.