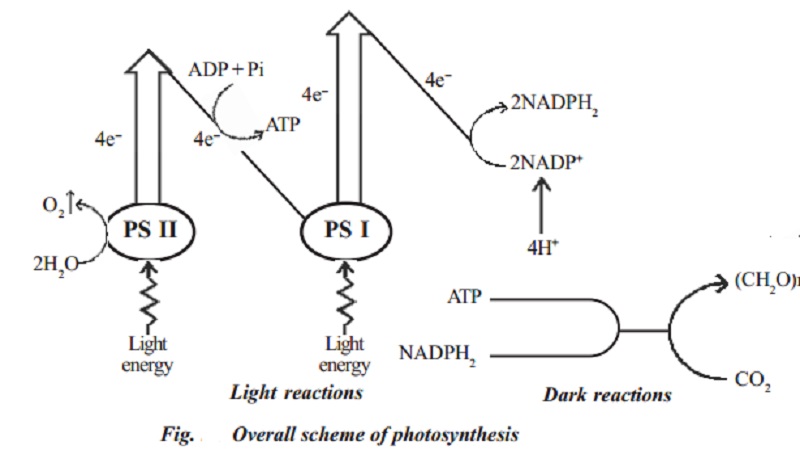 The pigments involved in photosynthesis are called photosynthetic pigments. They are chlorophyll 'a', chlorophyll 'b', carotenoids, xanthophyll and phycobilins. Magnesium is an essential component for the formation of chlorophyll.

The overall reaction of photosynthesis can be written as follows.

The light driven reactions of photosynthesis are referred to as electron transport chain. When PS II absorbs photons of light, it is excited and the electrons are transported through electron transport chain of plastoquinone, cytochrome b6, cytochrome f and plastocyanin. The electrons released from PS II phosphorylate ADP to ATP. This process of ATP formation from ADP in the presence of light in chloroplast is called photophosphorylation.

Now, the PS II is in oxidised state. It creates a potential to split water molecules to protons, electrons and oxygen. This light dependent splitting of water molecules is called photolysis of water. Manganese, calcium and chloride ions play prominent roles in the photolysis of water. The electrons thus released are used in the reduction of PS II. Similar to PS II, PS I is excited by absorbing photons of light and gets oxidised. This oxidised state of the PS I draws electrons from PS II and gets reduced.

The electrons released to PS I are transported through electron transport chain of ferredoxin reducing substrate, ferredoxin and ferredoxin NADP reductase to reduce NADP+ to NADPH2.

When the molecules in the PS I are excited the electrons are released. So, an electron deficiency or a hole is made in the PS I. This electron is now transferred to ferredoxin to reduce NADP+. When the molecules in the PS II get excited, electrons are released. They are transferred to fill the hole in PS I through plastoquinone, cytochrome b6, cytochrome f and plastocyanin. When the electron is transported between plastoquinone and cytochrome f, ADP is phosphorylated to ATP.

The reactions that catalyze the reduction of CO2 to carbohydrates with the help of the ATP and NADPH2 generated by the light reactions are called the dark reactions. The enzymatic reduction of CO2 by these reactions is also known as carbon fixation. These reactions that result in CO2 fixation take place in a cyclic way and were discovered by Melvin Calvin. Hence, the cycle is called Calvin cycle. Fixation of carbondioxide in plants during photosynthesis occurs in three stages - fixation, reduction and regeneration of RuBP.

The acceptor molecule of CO2 is a 5C compound called ribulose-1,5-bisphosphate (RuBP). Fixation of a molecule of CO2 to RuBP is catalyzed by the enzyme RuBP carboxylase. The resulting 6C compound is highly unstable and gets cleaved to form two molecules of 3C compounds called phosphoglyceric acid (PGA).

power NADPH2. So, two molecules of NADPH2 will be consumed during this reaction. To reduce one molecule of CO2 upto reduction two ATP and two NADPH2 are consumed.

The glyceraldehyde 3-phosphate molecules are converted to RuBP through a series of reactions, which generate 4C, 6C and 7C phosphorylated compounds as intermediates. For better and easy understanding of these reactions, a simplified scheme of Calvin cycle considering three CO2 molecules fixation reactions is shown below.

The reactions of regeneration of RuBP are as follows.

1.        Some of the Glyceraldehyde 3-phosphate molecules are converted to dihydroxy acetone phosphates.

9.        Ru5P molecules are then phosphorylated by ATP to form RuBP molecules, which again enter into the cycle of CO2 fixation.