Inhaled anesthetics, volatile as well as gaseous, are taken up through gas exchange in the alveoli.

Inhaled anesthetics, volatile as well as gaseous, are taken up through gas exchange in the alveoli. Uptake from the alveoli into the blood and distribution and partitioning into the effect com-partments are important determinants of the kinetics of these agents. As previously mentioned, an ideal anesthetic should have a rapid onset (induction), and its effect should be rapidly termi-nated. To achieve this, the effect site concentration in the CNS (brain and spinal cord) will need to change rapidly. Several factors determine how quickly the CNS concentration changes.

A. Inspired Concentration and Ventilation

Increases in the inspired partial pressure increase the rate of rise in the alveoli and thus accelerate induction. The increase of partial pressure in the alveoli is usually expressed as a ratio of alveolar concentration (FA) over inspired concentration (FI); the faster FA/FIapproaches 1 (1 representing the equilibrium), the faster anesthe-sia will occur during an inhaled induction.The other parameter that directly controls the rate by which FA/FI approaches 1 is alveolar ventilation. An increase in ventilation will increase the rate of rise. The magnitude of the effect varies

according to the blood:gas partition coefficient. An increase in pulmonary ventilation is accompanied by only a slight increase in arterial tension of an anesthetic with low blood solubility, but can significantly increase tension of agents with moderate to high blood solubility (Figure 25–3). For example, a fourfold increase in the ventilation rate almost doubles the FA/FI ratio for halothane during the first 10 minutes of administration but increases the FA/FI ratio for nitrous oxide by only 15%. Thus, hyperventilation increases the speed of induction of anesthesia with inhaled anes-thetics that would normally have a slow onset. Depression of res-piration by opioid analgesics slows the onset of anesthesia of inhaled anesthetics unless ventilation is manually or mechanically assisted.

The increase of FA/FI, which is an important determinant of the speed of induction, is opposed by the uptake of anesthetic into the blood,  which  is  determined  by  pharmacokinetic  parameters unique to the anesthetic agent as well as patient factors.

Solubility—One of the most important factors influencingthe transfer of an anesthetic from the lungs to the arterial blood is its solubility characteristics (Table 25–1). The blood:gas partition coefficient is a useful index of solubility and defines the relative affinity of an anesthetic for the blood compared with that of inspired gas. The partition coefficients for desflurane and nitrous oxide, which are relatively insoluble in blood, are extremely low. When an anesthetic with low blood solubility diffuses from the lung into the arterial blood, relatively few molecules are required to raise its partial pressure; therefore, the arterial tension rises rapidly (Figure 25–4, top; nitrous oxide, desflurane, sevoflurane). Conversely, for anesthetics with moderate to high solubility (Figure 25–4, bottom; halothane, isoflurane), more molecules dissolve before partial pressure changes significantly, and arterial tension of the gas increases less rapidly.

A blood:gas partition coef-ficient of 0.47 for nitrous oxide means that at equilibrium, the concentration in blood is 0.47 times the concentration in the alveolar space (gas). A larger blood:gas partition coefficient pro-duces a greater uptake of anesthetic and therefore reduces the time required for FA/FI to approach 1 (equilibrium, Figure 25–4). 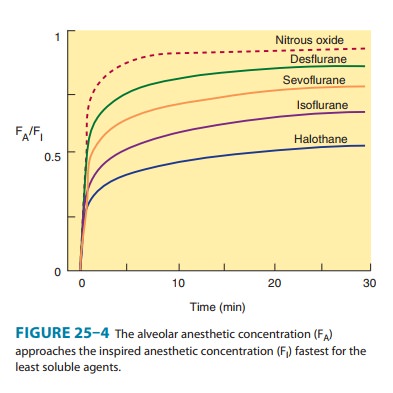 Alveolar-venous partial pressure difference—The anes-thetic partial pressure difference between alveolar and mixed venous blood is dependent mainly on uptake of the anesthetic by the tissues, including nonneural tissues. Depending on the rate and extent of tissue uptake, venous blood returning to the lungs may contain significantly less anesthetic than arterial blood. The greater this difference in anesthetic gas tensions, the more time it will take to achieve equilibrium with brain tissue. Anesthetic uptake into tissues is influenced by factors similar to those that determine transfer of the anesthetic from the lung to the intravas-cular space, including tissue:blood partition coefficients, rates of blood flow to the tissues, and concentration gradients.

During the induction phase of anesthesia (and the initial phase of the maintenance period), the tissues that exert greatest influ-ence on the arteriovenous anesthetic concentration gradient are those that are highly perfused (eg, brain, heart, liver, kidneys, and splanchnic bed). Combined, these tissues receive over 75% of the resting cardiac output. In the case of volatile anesthetics with rela-tively high solubility in highly perfused tissues, venous blood concentration initially is very low, and equilibrium with the alveo-lar space is achieved slowly.During maintenance of anesthesia with inhaled anesthetics, the drug continues to be transferred between various tissues at rates dependent on the solubility of the agent, the concentration gradi-ent between the blood and the tissue, and the tissue blood flow. Although muscle and skin constitute 50% of the total body mass, anesthetics accumulate more slowly in these tissues than in highly perfused tissues (eg, brain) because they receive only one fifth of the resting cardiac output. Although most anesthetic agents are highly soluble in adipose (fatty) tissues, the relatively low blood perfusion to these tissues delays accumulation, and equilibrium is unlikely to occur with most anesthetics during a typical 1- to 3-hour operation. 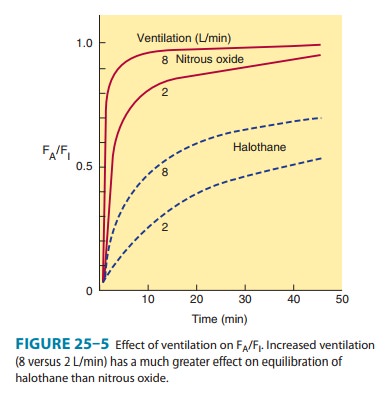 The combined effect of ventilation, solubility in the different tissues, cardiac output, and blood flow distribution determines the rate of rise of FA/FI characteristic of each drug (Figure 25–5). When inducing anesthesia by inhalation only, the rate by which FA/FI approaches 1 will determine the speed of induction.

Recovery from inhalation anesthesia follows some of the same principles in reverse that are important during induction. The time to recovery from inhalation anesthesia depends on the rate of elimination of the anesthetic from the brain. One of the most important factors governing rate of recovery is the blood:gas parti-tion coefficient of the anesthetic agent. Other factors controlling rate of recovery include pulmonary blood flow, magnitude of ventilation, and tissue solubility of the anesthetic. Two features differentiate the recovery phase from the induction phase. First, transfer of an anesthetic from the lungs to blood can be enhanced by increasing its concentration in inspired air, but the reverse transfer process cannot be enhanced because the concentration in the lungs cannot be reduced below zero. Second, at the beginning of the recovery phase, the anesthetic gas tension in different tissues may be quite variable, depending on the specific agent and the duration of anesthesia. In contrast, at the start of induction of anesthesia the initial anesthetic tension is zero in all tissues.

Inhaled anesthetics that are relatively insoluble in blood (ie, possess low blood:gas partition coefficients) and brain are elimi-nated at faster rates than the more soluble anesthetics. The washoutof nitrous oxide, desflurane, and sevoflurane occurs at a rapid rate, leading to a more rapid recovery from their anesthetic effects com-pared with halothane and isoflurane. Halothane is approximately twice as soluble in brain tissue and five times more soluble in blood than nitrous oxide and desflurane; its elimination therefore takes place more slowly, and recovery from halothane- and isoflu-rane-based anesthesia is predictably less rapid.

The duration of exposure to the anesthetic can also have a sig-nificant effect on the recovery time, especially in the case of the more soluble anesthetics (eg, halothane and isoflurane). Accumulation of anesthetics in muscle, skin, and fat increases with prolonged exposure (especially in obese patients), and blood tension may decline slowly during recovery as the anesthetic is slowly elimi-nated from these tissues. Although recovery may be rapid even with the more soluble agents following a short period of exposure, recovery is slow after prolonged administration of halothane or isoflurane.

Modern inhaled anesthetics are eliminated mainly by ventilation and are only metabolized to a very small extent; thus, metabolism of these drugs does not play a significant role in the termination of their effect. However, metabolism may have important implications for their toxicity (see Toxicity of Anesthetic Agents). Hepatic metabolism may also contribute to the elimination of and recovery from some older volatile anesthetics. For example, halothane is eliminated more rapidly during recovery than enflurane, which would not be predicted from their respective tissue solubility. This increased elimination occurs because over 40% of inspired halo-thane is metabolized during an average anesthetic procedure, whereas less than 10% of enflurane is metabolized over the same period.

In terms of the extent of hepatic metabolism, the rank order for the inhaled anesthetics is halothane > enflurane > sevoflurane > isoflurane > desflurane > nitrous oxide (Table 25–1). Nitrous oxide is not metabolized by human tissues. However, bacteria in the gastrointestinal tract may be able to break down the nitrous oxide molecule.