This section focuses on the use of thiopental and methohexital for induction of general anesthesia; however, these barbiturate hypnotics have been largely replaced as induction agents by propofol.

This section focuses on the use of thiopental and methohexital for induction of general anesthesia; however, these barbiturate hypnotics have been largely replaced as induction agents by propofol.

Thiopental and methohexital undergo hepatic metabolism, mostly by oxidation but also by N-dealkylation, desulfuration, and destruction of the barbituric acid ring structure. Barbiturates should not be administered to patients with acute intermittent porphyria because they increase the production of porphyrins through stimulation of aminolevulinic acid synthetase. Methohexital has a shorter elimination half-time than thiopental due to its larger plasma clearance (Table 25–2), leading to a faster and more complete recovery after bolus injection. Although thio-pental is metabolized more slowly and has a long elimination half-time, recovery after a single bolus injection is comparable to that of methohexital and propofol because it depends on redistri-bution to inactive tissue sites rather than on metabolism (Figure 25–7). However, if administered through repeated bolus injec-tions or continuous infusion, recovery will be markedly prolonged because elimination will depend on metabolism under these cir-cumstances (see also context-sensitive half-time, Figure 25–8). 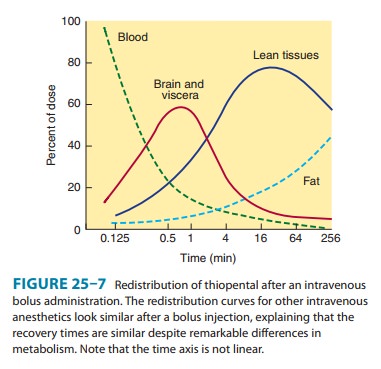 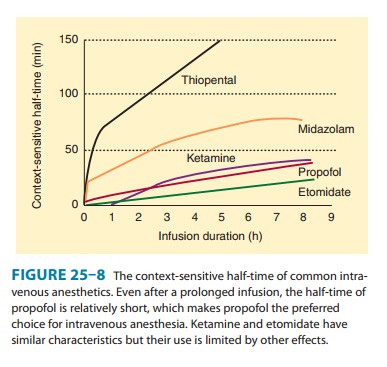 Barbiturates produce dose-dependent CNS depression ranging from sedation to general anesthesia when administered as bolus injections. They do not produce analgesia; instead, some evidence suggests they may reduce the pain threshold causing hyperalgesia. Barbiturates are potent cerebral vasoconstrictors and produce pre-dictable decreases in cerebral blood flow, cerebral blood volume, and ICP. As a result, they decrease CMRO2 consumption in a dose-dependent manner up to a dose at which they suppress all EEG activity. The ability of barbiturates to decrease ICP and CMRO2 makes these drugs useful in the management of patients with space-occupying intracranial lesions. They may provide neu-roprotection from focal cerebral ischemia (stroke, surgical retrac-tion, temporary clips during aneurysm surgery), but probably not from global cerebral ischemia (eg, from cardiac arrest). Except for methohexital, barbiturates decrease electrical activity on the EEG and can be used as anticonvulsants. In contrast, methohexital activates epileptic foci and may therefore be useful to facilitate electroconvulsive therapy or during the identification of epileptic foci during surgery.

The decrease in systemic blood pressure associated with adminis-tration of barbiturates for induction of anesthesia is primarily due to peripheral vasodilation and is usually smaller than the blood pressure decrease associated with propofol. There are also direct negative inotropic effects on the heart. However, inhibition of the baroreceptor reflex is less pronounced than with propofol; thus, compensatory increases in heart rate limit the decrease in blood pressure and make it transient. The depressant effects on sys-temic blood pressure are increased in patients with hypovolemia, cardiac tamponade, cardiomyopathy, coronary artery disease, or cardiac valvular disease because such patients are less able to compensate for the effects of peripheral vasodilation. Hemo-dynamic effects are also more pronounced with larger doses and rapid injection.

Barbiturates are respiratory depressants, and a usual induction dose of thiopental or methohexital typically produces transient apnea, which will be more pronounced if other respiratory depressants are also administered. Barbiturates lead to decreased minute ventilation through reduced tidal volumes and respiratory rate and also decrease the ventilatory responses to hypercapnia and hypoxia. Resumption of spontaneous breathing after an anesthetic induction dose of a barbiturate is characterized by a slow breathing rate and decreased tidal volume. Suppression of laryngeal reflexes and cough reflexes is probably not as profound as after an equianesthetic propofol administration, which makes barbiturates an inferior choice for airway instrumentation in the absence of neuromuscular blocking drugs. Furthermore, stimulation of the upper airway or trachea (eg, by secretions, laryngeal mask airway, direct laryngos-copy, tracheal intubation) during inadequate depression of airway reflexes may result in laryngospasm or bronchospasm. This phe-nomenon is not unique to barbiturates but is true whenever the drug dose is inadequate to suppress the airway reflexes.

Accidental intra-arterial injection of barbiturates results in excru-ciating pain and intense vasoconstriction, often leading to severe tissue injury involving gangrene. Approaches to treatment include blockade of the sympathetic nervous system (eg, stellate ganglion block) in the involved extremity. If extravasation occurs, some authorities recommend local injection of the area with 0.5% lido-caine (5–10 mL) in an attempt to dilute the barbiturate concen-tration. Life-threatening allergic reactions to barbiturates are rare, with an estimated occurrence of 1 in 30,000 patients. However, barbiturate-induced histamine release occasionally is seen.

The principal clinical uses of thiopental (3–5 mg/kg IV) or metho-hexital (1–1.5 mg/kg IV) is for induction of anesthesia (uncon-sciousness), which usually occurs in less than 30 seconds. Patients may experience a garlic or onion taste after administration. Barbiturates such as methohexital (20–30 mg/kg) may be adminis-tered per rectum to facilitate induction of anesthesia in mentally challenged and uncooperative pediatric patients. When a barbitu-rate is administered with the goal of neuroprotection, an isoelectric EEG indicating maximal reduction of CMRO2 has traditionally been used as the end point. More recent data demonstrating equal protection after smaller doses have challenged this practice. The use of smaller doses is less frequently associated with hypotension, thus making it easier to maintain adequate cerebral perfusion pressure, especially in the setting of increased ICP.