Home | | Pharmaceutical Biotechnology: Fundamentals and Applications | Pharmacodynamics of Protein Therapeutics
Posted On :  12.06.2017 11:25 am

Protein therapeutics are usually highly potent com-pounds with steep dose–effect curves as they are targeted therapies towards a specific, well-described pharmacologic structure or mechanism.

Protein therapeutics are usually highly potent com-pounds with steep dose–effect curves as they are targeted therapies towards a specific, well-described pharmacologic structure or mechanism. Thus, a care-ful characterization of the concentration–effect rela-tionship, i.e., the pharmacodynamics, is especially desirable for protein therapeutics (Tabrizi and Roskos, 2006). Combination of pharmacodynamics with phar-macokinetics by integrated pharmacokinetic–pharma-codynamic modeling (PK/PD modeling) adds an additional level of complexity that allows furthermore characterization of the dose–exposure–response rela-tionship of a drug and a continuous description of the time course of effect intensity directly resulting fromthe administration of a certain dosage regimen (Fig. 9) (Meibohm and Derendorf, 1997; Derendorf and Meibohm, 1999). 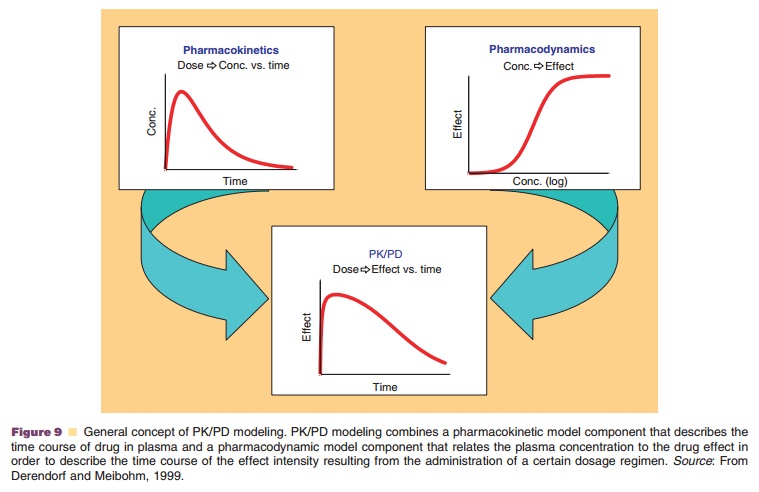 PK/PD modeling is a technique that combines the two classical pharmacologic disciplines of pharmacoki-netics and pharmacodynamics. It integrates a pharma-cokinetic and a pharmacodynamic model component into one set of mathematical expressions that allows the description of the time course of effect intensity in response to administration of a drug dose. This so-called integrated PK/PD model allows deriving pharmacoki-netic and pharmacodynamic model parameters that characterize the dose–concentration–effect relationship for a specific drug based on measured concentration and effect data. In addition, it allows simulation of the time course of effect intensity for dosage regimens of a drug beyond actually measured data, within the constraints of the validity of the model assumptions for the simulated condition. Addition of a statistical model component describing inter- and intraindividual variation in model parameters allows expanding PK/PD models to describe time courses of effect intensity not only for individual subjects, but also for whole populations of subjects.

Integrated PK/PD modeling approaches have widely been applied for the characterization of protein therapeutics (Tabrizi and Roskos, 2006). Embedded in a model-based drug development approach, modeling and simulation based on integrated PK/PD does not only provide a comprehensive summary of the avail-able data, but also enables to test competing hypotheses regarding processes altered by the drug, allows making predictions of drug effects under new conditions, and facilitates to estimate inaccessible system variables (Meibohm and Derendorf, 1997; Mager et al., 2003).

Mechanism-based PK/PD modeling appreciat-ing the physiological events involved in the elabora-tion of the observed effect has been promoted as superior modeling approach as compared to empiri-cal modeling, especially because it does not only describe observations but also offers some insight into the underlying biological processes involved and thus provides flexibility in extrapolating thetransform this available knowledge into a mechanism-based PK/PD modeling approach that appropriately char-acterizes the real physiological process leading to the drug’s therapeutic effect.

The relationship between exposure and response may be either simple or complex, and thus obvious or hidden. However, if no simple relationship is obvious, it would be misleading to conclude a priori that no relationship exists at all rather than that it is not readily apparent (Levy, 1986).

The application of PK/PD modeling is beneficial in all phases of preclinical and clinical drug develop-ment and has been endorsed by the pharmaceutical industry, academia and regulatory agencies (Peck et al., 1994; Breimer and Danhof, 1997; Machado et al., 1999; Lesko et al., 2000; Sheiner and Steimer, 2000; Meibohm and Derendorf, 2002), most recently by the Critical Path Initiative of the U.S. Food and Drug Administration (Lesko, 2007). Thus, PK/PD concepts and model-based drug development play a pivotal role especially in the drug development process for biologics, and their widespread application supports a scientifically driven, evidence-based, and focused product development for protein therapeutics.

While a variety of PK/PD modeling approaches has been employed for biologics, we will in the following focus on five classes of approaches to illustrate the challenges and complexities, but also opportunities to characterize the pharmacodynamics of protein therapeutics:

It should be mentioned, however, that PK/PD models for protein therapeutics are not only limited to continuous responses as shown in the following, but are also used for binary or graded responses. Binary responses are responses with only two outcome levels where a condition is either present or absence, for example, dead versus alive. Graded or categorical responses have a set of predefined outcome levels, which may or may not be ordered, for example the categories “mild,” “moderate,” and “severe” for a disease state. Lee et al. (2003), for example, used a logistic PK/PD modeling approach to link cumulative AUC of the anti-TNF-a protein etanercept with a binary response, the American College of Rheumatology response criterion of 20% improvement (ARC20) in patients with rheumatoid arthritis.