Since the effect of most protein therapeutics is mediated via complex regulatory physiologic processes including feedback mechanisms and/or tolerance phenomena, some PK/PD models.

Since the effect of most protein therapeutics is mediated via complex regulatory physiologic processes including feedback mechanisms and/or tolerance phenomena, some PK/PD models that have been described for protein drugs are much more sophisticated than the four classes of models previously discussed. 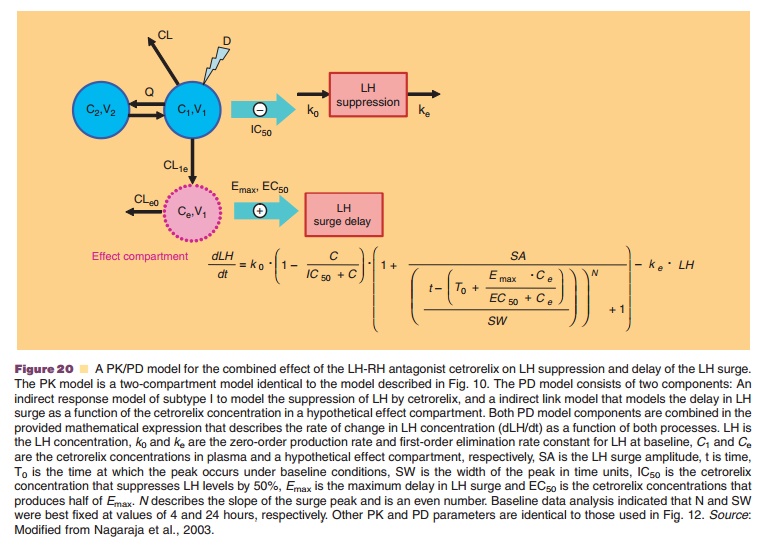 One example of such a complex modeling approach has been developed for the therapeuticeffects of the LH-RH antagonist cetrorelix (Nagaraja et al., 2000; Pechstein et al., 2000; Nagaraja et al., 2003). Cetrorelix is used for the prevention of premature ovulation in women undergoing controlled ovarian stimulation in in vitro fertilization protocols. LH-RH antagonists suppress the LH levels and delay the occurrence of the preovulatory LH surge, and this delay is thought to be responsible for postponing ovulation. The suppression of LH was modeled in the PK/PD approach with an indirect-response model approach directly linked to cetrorelix plasma concen-trations (Fig. 20) (Nagaraja et al., 2003). The shift in LH surge was linked to cetrorelix concentration with a simple Emax-function via a hypothetical effect com-partment to account for a delay in response via complex signal transduction steps of unknown me-chanism of action. Figure 21 shows the application of this PK/PD model to characterize the LH suppression and LH surge delay after SC administration of cetrorelix to groups of 12 women at different dose levels. The analysis revealed a marked dose–response relationship for the LH surge and thus predictability of drug response to cetrorelix (Nagaraja et al., 2000). 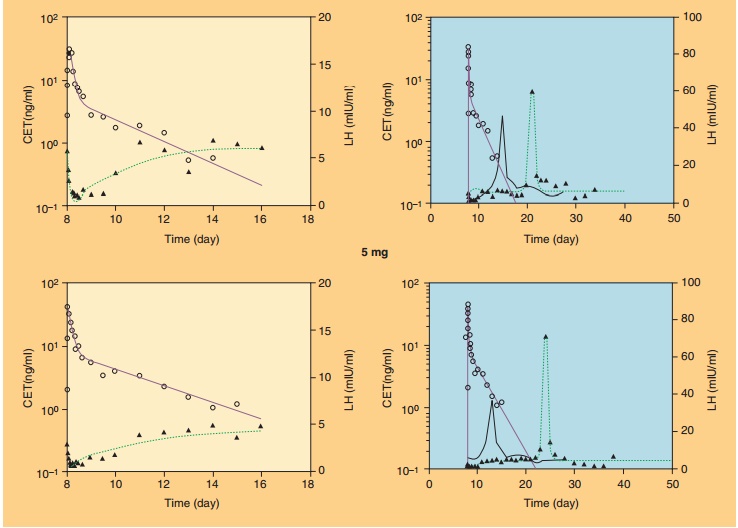 Another example for a complex PK/PD model is the cytokinetic model used to describe the effect of pegfilgrastim on the granulocyte count in peripheral blood (Roskos et al., 2006; Yang, 2006). Pegfigrastim is aPEGylated form of the human granulocyte-colony-stimulating factor (G-CSF) analog filgrastim. Pegfilgrastim, like filgrastim and G-CSF, stimulate the activation, proliferation, and differentiation of neutro-phil progenitor cells and enhance the functions of mature neutrophils (Roskos et al., 2006). Pegfilgrastim is mainly used as supportive care to ameliorate and enhance recovery from neutropenia secondary to cancer chemotherapy regimens. As already discussed in the section on PEGylation, pegfilgrastim follows target-mediated drug disposition with saturable re-ceptor-mediated endocytosiselimination pathway (CLlin; Fig. 22). The clearance for the receptor-mediated pathway isdetermined by the absolute neutrophil count (ANC), the sum of the peripheral blood band cell (Bp) and segmented neutrophil (Sp) populations. 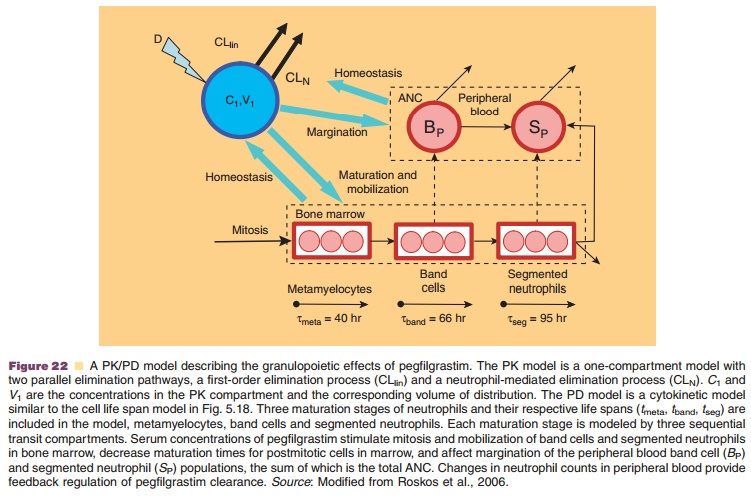 A maturation-structured cytokinetic model of granulopoiesis was established to describe the rela-tionship between pegfilgrastim serum concentration and neutrophil count (Fig. 22). The starting point is the production of metamyelocytes from mitotic pre-cursors. Subsequent maturation stages are captured as band cells and segmented neutrophils in the bone marrow. Each maturation stage is modeled by three sequential transit compartments. Pegfilgrastim con-centrations are assumed to increase ANC by stimulat-ing mitosis and mobilization of band cells and segmented neutrophils from the bone marrow into the systemic circulation. Pegfilgrastim also promotes rapid margination of peripheral blood neutrophils, i.e., adhesion to blood vessels; this effect is modeled as an expansion of neutrophil dilution volume. 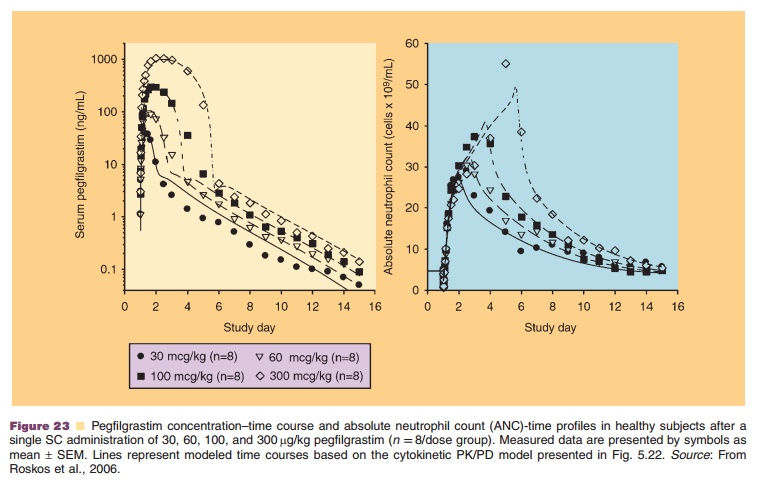 Figure 23 shows observed and modeled pegfil-grastim concentration-time and ANC-time profiles after escalating single SC dose administration of pegfilgrastim. The presented PK/PD model for pegfilgrastim allowed determining its EC50 for the effect on ANC. Based on this EC50 value and the obtained pegfilgrastim plasma concentrations, it was concluded that a 100 mg/kg dose was sufficient to reach the maximum therapeutic effect of pegfilgrastim on ANC (Roskos et al., 2006; Yang, 2006).