In recent years, approaches modifying the molecular structure of protein therapeutics have repeatedly been applied to affect the immunogenicity, pharmacoki-netics, and/or pharmacodynamics of protein drugs.

Chemical Modifications for Optimizing the Pharmacokinetics of Protein Therapeutics

In recent years, approaches modifying the molecular structure of protein therapeutics have repeatedly been applied to affect the immunogenicity, pharmacoki-netics, and/or pharmacodynamics of protein drugs. These approaches include the addition, deletion or exchange of selected amino acids within the protein’s sequence, synthesis of truncated proteins with a reduced amino acid sequence, glycosylation or degly-cosylation, and covalent linkage to polymers (Veronese and Caliceti, 2006). The latter approach has been used for several protein therapeutics by linking them to monomethoxy polyethylene glycol (PEG) molecules of various chain lengths in a process called PEGylation (Caliceti and Veronese, 2003).

The conjugation of high polymeric mass to protein drugs is generally aimed at preventing the protein from being recognized by the immune system as well as reducing its elimination via glomerular filtration or proteolytic enzymes, thereby prolonging the oftentimes relatively short elimina-tion half-life of endogenous proteins. Conjugation of protein drugs with PEG chains increases their molecular weight, but because of the attraction of water molecules by PEG even more their hydro-dynamic volume, which in turn results in a reduced renal clearance and restricted volume of distribution. PEGylation can also shield antigenic determinants on the protein drug from detection by the immune system through steric hindrance (Walsh et al., 2003). Similarly, amino acid sequences sensitive towards proteolytic degradation may be shielded against protease attack. By adding a large, hydrophilicmolecule to the protein, PEGylation can also increase drug solubility (Molineux, 2003).

Pegfilgrastim is the PEGylated version of the granulocyte-colony-stimulating factor filgrastim, which is administered for the management of che-motherapy-induced neutropenia. PEGylation mini-mizes filgrastim’s renal clearance by glomerular filtration, thereby making neutrophil-mediated clear-ance the predominant route of elimination. Thus, PEGylation of filgrastim results in so-called “self-regulating pharmacokinetics” since pegfilgrastim has a reduced clearance and thus prolonged half-life and more sustained duration of action in a neutropenic compared to a normal patient because only few mature neutrophils are available to mediate its elimination (Zamboni, 2003). 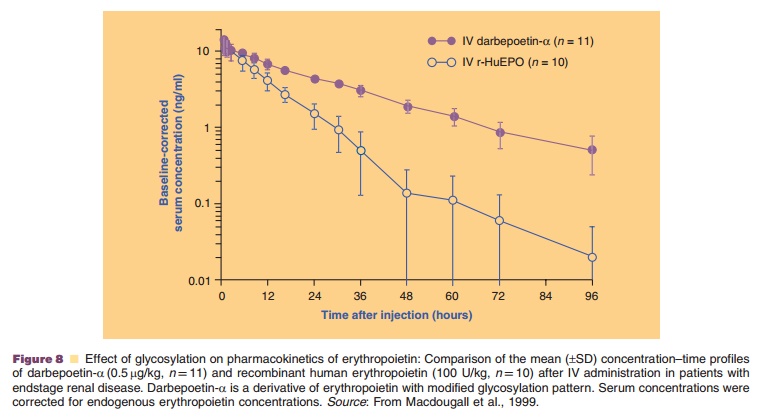 The hematopoietic growth factor darbepoetin-a is an example of a chemically modified endogenous protein with altered glycosylation pattern. It is aglycosylation analog of human erythropoietin, with two additional N-linked oligosaccharide chains (five in total) (Mould et al., 1999). The additional N-glycosylation sites were made available through substitution of five amino acid residues in the peptide backbone of erythropoietin, thereby increasing the molecular weight from 30 to 37 kDa. Darbepoetin-a has a substantially modified pharmacokinetic profile compared to erythropoietin, resulting in a three-fold longer serum half-life that allows for reduced dosing frequency (Fig. 8) (Macdougall et al., 1999). More details on hematopoietic growth factors, including erythropoietin and darbepoetin-α, are provided.