The concentration of a protein therapeutic is usually only quantified in plasma, serum, or blood, while the magnitude of the observed response is deter-mined by the concentration of the protein drug at its effect site, the site of action in the target tissue.

The concentration of a protein therapeutic is usually only quantified in plasma, serum, or blood, while the magnitude of the observed response is deter-mined by the concentration of the protein drug at its effect site, the site of action in the target tissue (Meibohm and Derendorf, 1997). Effect site concen-trations, however, are usually not accessible for measurement, and plasma, serum or blood concen-trations are usually used as their substitute. The relationship between the drug concentration in plasma and at the effect site may either be constant or undergo time-dependent changes. If equilibrium between both concentrations is rapidly achieved or the site of action is within plasma, serum or blood, there is practically a constant relationship between both concentrations with no temporal delay between plasma and effect site. In this case, measured plasma concentrations can directly serve as input for a pharmacodynamic model (Fig. 10). The most frequently used direct link pharmacodynamic model is a sigmoid Emax model:

with Emax as maximum achievable effect, C as drug concentration in plasma, and EC50 the concentration of the drug that produces half of the maximum effect. The Hill coefficient  is a shape factor that allows for an improved fit of the relationship to the observed data. As represented by the equation for the sigmoid Emax model, a direct link model directly connects measured concentration to the observed effect without any temporal delay (Derendorf and Meibohm, 1999). 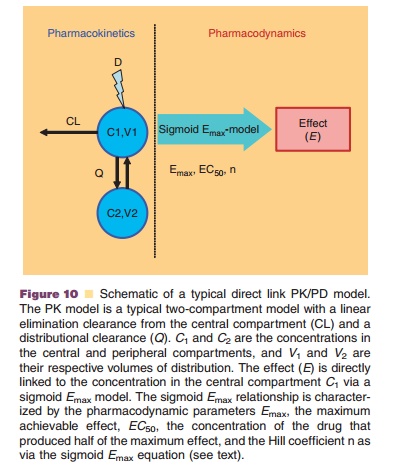 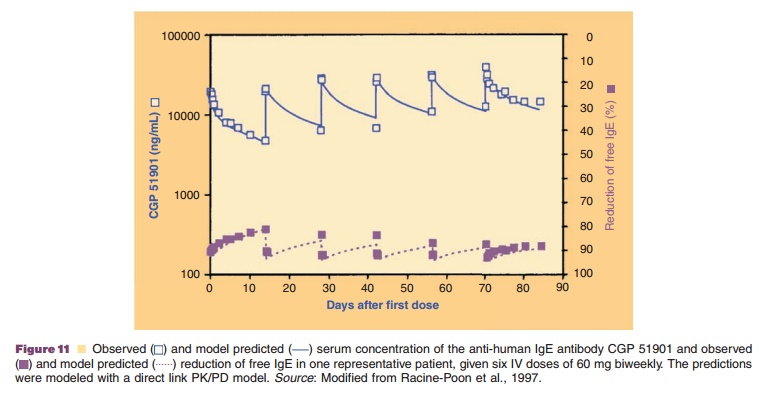 A direct link model was, for example, used to relate the serum concentration of the anti-human immunoglobulin E (IgE) antibody CGP 51901 for the treatment of seasonal allergic rhinitis to the reduction of free IgE via an inhibitory Emaxmodel (Fig. 11) (Racine-Poon et al., 1997). It should be noted that the peak and trough concentrations and effects are directly related and thus occur at the same times, respectively, without time delay. Similarly, a direct link model was used to relate the effect of recombi-nant interleukin-10 (IL-10) on the ex vivo release of the pro-inflammatory cytokines TNF-a and interleu-kin-1b in LPS-stimulated leukocytes (Radwanski et al., 1998). In the first case, the site of action and the sampling site for concentration measurements of the protein therapeutic were identical, i.e., in plasma, and so the direct link model was mechanistically well justified. In the second case, the effect was dependent on the IL-10 concentration on the cell surface of leukocytes where IL-10 interacts with its target receptor. Again sampling fluid and effect site were in instant equilibrium.