Protein–antibody complexation can not only modulate or even obliterate the biological activity of a protein drug, but may also modify its pharmacoki-netic profile. Elimination clearances of protein drugs, for example, may be either increased or decreased by antibody formation and binding (Fig. 6). An increase in clearance is observed if the protein–antibody complex is eliminated more rapidly than the unbound protein (Rosenblum et al., 1985). This increase may occur when high levels of the protein–antibody complex stimulate its clearance by the reticuloen-dothelial system. In other situations, the serum concentration of a protein can be increased if binding to an antibody slows down its rate of clearance because the protein–antibody complex is eliminated more slowly than the unbound protein (Working and Cossum, 1991). In this case, the complex may act as a depot for the protein and, if the antibody is not neutralizing, a longer duration of the pharmacological action may occur. For example, the clearance of rIFNα2a in cancer patients was increased because of an antibody response. In contrast, human leukocyte IFNβ concentration in rats was decreased 15-fold when circulating antibodies were present. A decrease of clearance in the presence of antibody titers was also detected for t-PA in dogs (Working, 1992). 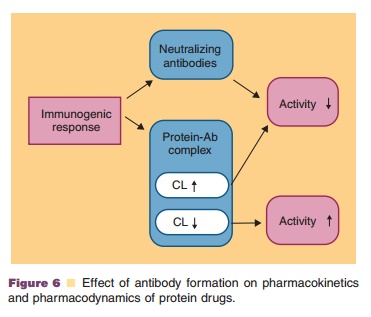 Both an increased and decreased clearance is possible for the same protein, dependent on the dose level administered. At low doses, protein–antibody complexes delay clearance because their elimination is slower than that of the unbound protein. In contrast, at high doses, higher levels of protein–antibody complex result in the formation of aggregates, which are cleared more rapidly than the unbound protein.

The enhancement of the clearance of cytokine interleukin-6 (IL-6) via administration of cocktails of three anti-IL-6 monoclonal antibodies was suggested as a therapeutic approach in cytokine-dependent diseases like multiple myeloma, B-cell lymphoma, and rheuma-toid arthritis (Montero-Julian et al., 1995). The authors could show that, while the binding of one or two antibodies to the cytokine led to stabilization of the cytokine, simultaneous binding of three anti-IL-6 anti-bodies to three distinct epitopes induced rapid uptake of the complex by the liver and thus mediated a rapid elimination of IL-6 from the central compartment.