The Pediatric Perioperative Cardiac Arrest (POCA) Registry provides a useful database for assessing pediatric anesthetic risk. This registry includes reports derived from approximately one million pediatric anesthetics administered since 1994. Case records of children experiencing cardiac arrests or death during the administration of or recovery from anesthesia were investigated regarding any pos-sible relationship with anesthesia. Nearly all patients received general anesthesia alone or combined with regional anesthesia. In a preliminary analysis that included 289 cases of cardiac arrest, anesthesia was judged to have contributed to 150 arrests. Thus the risk of cardiac arrest in pediatric anesthetic cases would appear to be approximately 1.4 in 10,000. Moreover, an overall mortality of 26% was reported following cardiac arrest. Approximately 6% suffered permanent injury, but the majority (68%) had either no or only temporary injury. Mortality was 4% in American Society of Anesthesiologists (ASA) physi-cal status 1 and 2 patients compared with 37% in ASA physical status 3–5 patients. It is important to note that 33% of patients who suffered a cardiac arrest were ASA physical status 1–2. Infants accounted for 55% of all anesthesia-related arrests, with those younger than 1 month of age (ie, neonates) having the greatest risk. As with adults, two major predic-tors of mortality were ASA physical status 3–5 and emergency surgery.

Most (82%) arrests occurred during induction of anesthesia; bradycardia, hypotension, and a low Spo2 frequently preceded arrest. The most com-mon mechanism of cardiac arrest was judged to be medication related (Figure 42–2). Cardiovascular depression from halothane, alone or in combination with other drugs, was believed to be responsible in 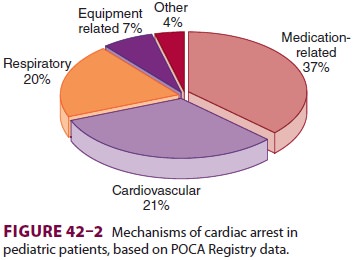 66% of all medication-related arrests. Another 9% was due to intravascular injection of a local anes-thetic, most often following a negative aspiration test during attempted caudal injection. Presumed cardiovascular mechanisms most often had no clear etiology; in more than 50% of those cases the patient had congenital heart disease. Where a cardiovascu-lar mechanism could be identified, it was most often related to hemorrhage, transfusion, or inadequate or inappropriate fluid therapy.

Respiratory mechanisms included laryngo-spasm, airway obstruction, and difficult intubation (in decreasing order). In most cases the laryn-gospasm occurred during induction. Nearly all patients who had airway obstruction or were dif-ficult to intubate had at least one other significant underlying disease.

The most common equipment-related mecha-nisms that led to a cardiac arrest were complications related to attempted central venous catheteriza-tion (eg, pneumothorax, hemothorax, or cardiac tamponade).

In recent years there has been increased concern and scientific interest in the possibility that general anesthesia and general anesthetic agents are toxic to the brains of small children. The experimental data in animals are consistently worrisome, but the clinical data are (currently) inconclusive as to the extent of the risk and whether one technique is safer than another. Progress in this area can be followed on the SmartTots web site (http://www.smarttots.org), maintained by the International Anesthesia Research Society.

Children are at greater risk than adults of devel-oping malignant hyperthermia.