Pantothenic acid (sometimes known as vitamin B5, and at one time called vitamin B3) has a central role in energy-yielding metabolism as the functional moiety of coenzyme A (CoA) and in the biosynthesis of fatty acids as the prosthetic group of acyl carrier protein.

Pantothenic acid (sometimes known as vitamin B5, and at one time called vitamin B3) has a central role in energy-yielding metabolism as the functional moiety of coenzyme A (CoA) and in the biosynthesis of fatty acids as the prosthetic group of acyl carrier protein. The structures of pantothenic acid and CoA are shown in Figure 8.18. 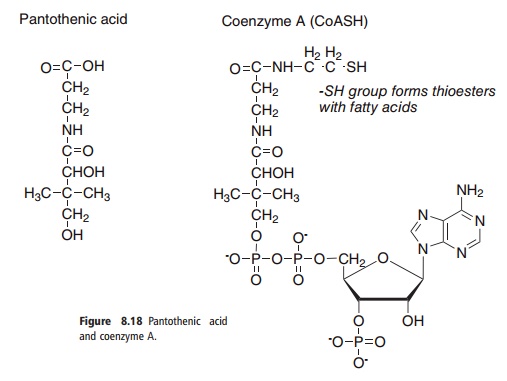 Pantothenic acid is widely distributed in all food-stuffs; the name derives from the Greek for “from everywhere,” as opposed to other vitamins that were originally isolated from individual especially rich sources. As a result, deficiency has not been unequivo-cally reported in human beings except in specific depletion studies, most of which have used the antag-onist ω-methyl-pantothenic acid.

Coenzyme A and acyl carrier protein

All tissues are capable of forming CoA from panto-thenic acid. CoA functions as the carrier of fatty acids, as thioesters, in mitochondrial β-oxidation. The resultant two-carbon fragments, as acetyl-CoA, then undergo oxidation in the citric acid cycle. CoA also functions as a carrier in the transfer of acetyl (and other fatty acyl) moieties in a variety of biosynthetic and catabolic reactions, including:

●acylation of serine, threonine and cysteine residues on proteolipids, and acetylation of neuraminic acid.

Fatty acid synthesis is catalyzed by a cytosolic multi-enzyme complex in which the growing fatty acyl chain is bound by thioester linkage to an enzyme-bound 4′-phosphopantetheine residue, rather than to free CoA, as in β-oxidation. This component of the fatty acid synthetase complex is the acyl carrier protein.

Pantothenic acid deficiency and safe and adequate levels of intake

Prisoners of war in the Far East in the 1940s, who were severely malnourished, showed, among other signs and symptoms of vitamin deficiency diseases, a new condition of paresthesia and severe pain in the feet and toes, which was called the “burning foot syn-drome” or nutritional melalgia. Although it was ten-tatively attributed to pantothenic acid deficiency, no specific trials of pantothenic acid were conducted, rather the subjects were given yeast extract and other rich sources of all vitamins as part of an urgent program of nutritional rehabilitation.

Experimental pantothenic acid depletion, together with the administration of ω-methyl-pantothenic acid, results in the following signs and symptoms after 2–3 weeks:

●      neuromotor disorders, including paresthesia of the hands and feet, hyperactive deep tendon reflexes, and muscle weakness. These can be explained by the role of acetyl-CoA in the synthesis of the neurotransmitter acetylcholine, and impaired formation of threonine acyl esters in myelin. Dysmyelination may explain the persistence and recurrence of neurological problems many years after nutritional rehabilitation in people who had suffered from burning foot syndrome

●      mental depression, which again may be related to either acetylcholine deficit or impaired myelin synthesis

●      gastrointestinal complaints, including severe vom-iting and pain, with depressed gastric acid secretion in response to gastrin

●      increased insulin sensitivity and a flattened glucose tolerance curve, which may reflect decreased antag-onism by glucocorticoids

●      decreased acetylation of p-aminobenzoic acid, sul-fonamides and other drugs, reflecting reduced availability of acetyl-CoA for these reactions

There is no evidence on which to estimate panto-thenic acid requirements. Average intakes are between 3 mg/day and 7 mg/day, and since deficiency does not occur, such intakes are obviously more than adequate to meet requirements.

Blood levels of pantothenic acid have been reported to be low in patients with rheumatoid arthritis; some workers have reported apparently beneficial effects of supplementation, but these reports remain uncon-firmed and there are no established pharmacological uses of the vitamin.

Pantothenic acid deficiency in rats leads to a loss of fur color and at one time pantothenic acid was known as the “anti-grey hair factor.” There is no evidence that the normal graying of hair with age is related to pan-tothenic acid nutrition, or that pantothenic acid sup-plements have any effect on hair color. Its use in shampoo is not based on any evidence of efficacy.

Pantothenic acid has very low toxicity; intakes of up to 10 g/day of calcium pantothenate (compared with a normal dietary intake of 2–7 mg/day) have been given for up to 6 weeks with no apparent ill-effects.