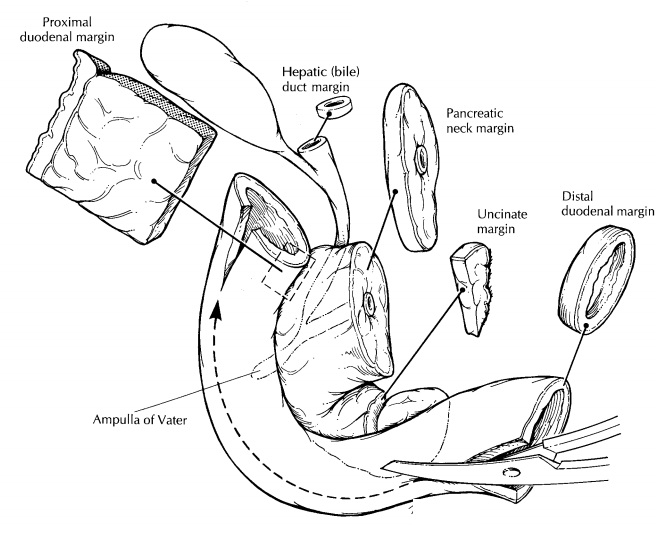 The pancreas can intimidate even the most experienced pathologist.

The pancreas can intimidate even the most expe-rienced pathologist. The complexity of the anat-omy of the pancreas and the importance of a good dissection in establishing the correct diag-nosis make the arrival of a resected pancreas in the surgical pathology laboratory a particularly stressful event. This stress can, however, be greatly reduced if you familiarize yourself with a few basic aspects of the anatomy of the pan-creas, and if you take a simple, logical approach to your dissection.

The Whipple procedure (pancreaticoduodenec-tomy) has emerged as an effective and safe treat-ment for neoplasms of the head of the pancreas, duodenum, distal common bile duct, and am-pulla of Vater. The orientation of these specimens can be greatly simplified if you remember that the specimen is composed of four basic compo-nents: (1) the duodenum, (2) the ampulla of Vater, (3) the bile duct, and (4) the pancreas.

Begin by orienting the duodenum: Two fea-tures of the duodenum can be used to identify its proximal and distal ends. First, the free proxi-mal end is almost always shorter than the free distal segment of the resected duodenum. Second, a small part of the stomach is occasion-ally attached to the proximal end. Next, identify the bile duct. As illustrated, the common bile duct can be recognized by its greenish color and characteristic tubular appearance. Also, if the gallbladder is present, use the insertion of the cystic duct to identify the common bile duct. The remaining components of the pancreas can be identified using the duodenum and bile duct as guides. The pancreas itself sits at the base of the junction of the bile duct and duodenum. The head of the pancreas sits within the duodenal C loop. The pancreatic neck margin can be recog-nized as the cut oval pancreatic surface with a central duct. Although the uncinate process of the pancreas is more difficult to identify, it can be visualized if you keep the anatomy of the pancreas in mind. As illustrated, the pancreas sits like a slightly curled hand enveloping the superior mesenteric artery and the portal vein. The thumb of the curled hand corresponds to the uncinate process of the pancreas and the flat fingers to the neck, body, and tail. Although the superior mesenteric vessels are not present in the resected specimen, remember that they were dissected from the pancreas right at the groove between the thumb and index finger.

After the major external landmarks have been identified, measure the dimensions of each, and ink the surface of the pancreas and the proximal and distal duodenal margins. Begin the dissection by opening the duodenum along the side oppo-site the pancreas. Look for and document any duodenal masses, ulcers, or areas of puckering of the duodenal mucosa. Before cutting the speci-men any further, submit sections of the margins. These should include: (1) a shave section of the bile duct margin; (2) a shave section of the pan-creatic neck margin; (3) a perpendicular section of the uncinate margin taken to include the vascular groove; (4) a perpendicular section from the prox-imal duodenal margin; and (5) a shave section from the distal duodenal margin. Next, using a pair of scissors, open the common bile duct. Because the extrapancreatic (proximal) portion of the duct is usually dilated, you may find it easier 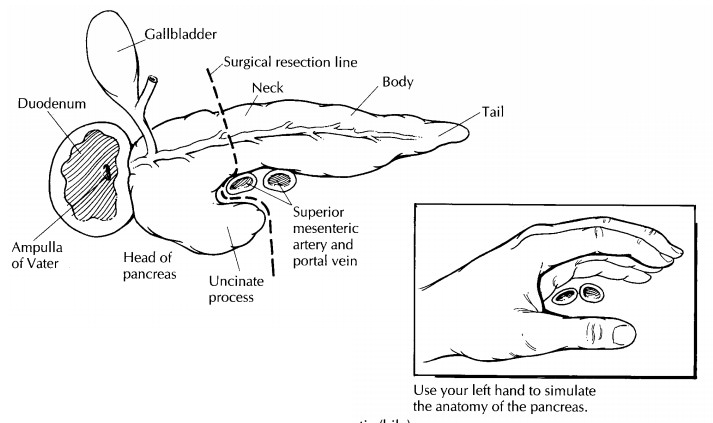 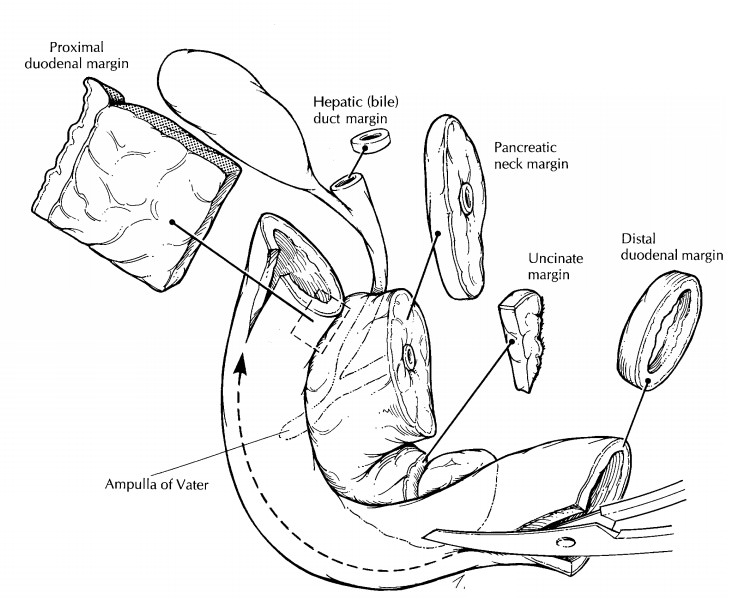 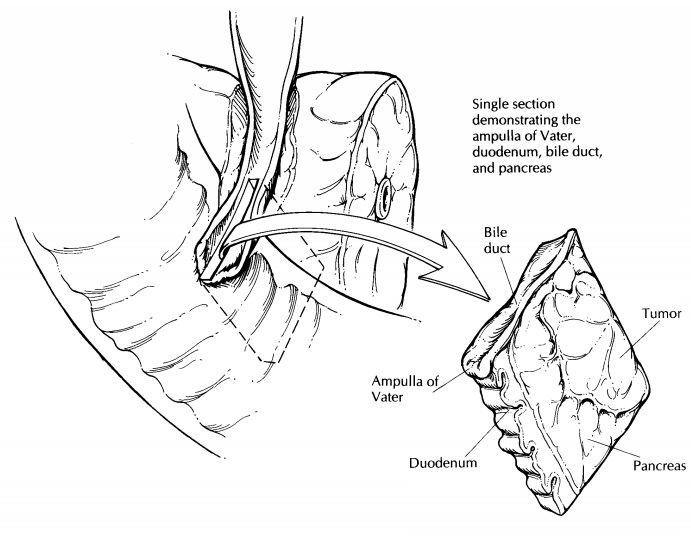 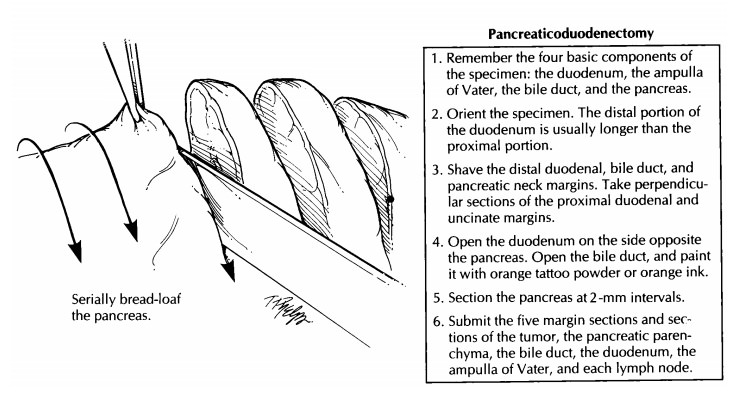 Distal pancreatectomies are much easier to handle than are pancreaticoduodenectomies. The anatomy is simple, and there are fewer margins to sample. First, find the proximal and distal ends of the pancreas. The spleen helps identify the distal aspect of the gland, and the cut surface of the pancreas is the proximal end. Next, weigh and measure the specimen, and submit a shave section of the proximal pancreatic margin. Ink the surface of the gland, and then bread-loaf it into 2-mm slices using a long sharp knife. These slices should be made perpendicular to the long axis of the gland. Examine the pancreatic parenchyma carefully, paying particular attention to the pancreatic duct. Is the duct dilated or stenotic? Are there any masses or calculi in it? What is the consistency of any fluid in the duct? Note the size, location, and gross appearance of any masses. Submit representative sections of any tumors and of the pancreatic parenchyma. Examine the peripancreatic soft tissues for lymph nodes, note their gross appearance, and submit a representative section of each. If the spleen is present, weigh it, measure it, section it, and submit representative sections, as described in the discussion of the spleen.

Cystic masses in the pancreas should be handled as described above. In addition, remember to do the following: (1) Describe the character of the cyst contents. Is the fluid clear or cloudy? Is it serous, mucinous, necrotic or bloody? A good description of the cyst contents can be invaluable in determining the tumor type. (2) Document whether the cyst is unilocular or multilocular. How large are the cysts, and are there any mural nodules? (3) If the cyst is lined by mucinous epi-thelium, then the entire cyst should be submitted for histologic diagnosis. Keep in mind that other-wise benign-appearing mucinous cystic neo-plasms can harbor small invasive cancers. (4) Finally and importantly, document the relation-ship of the cyst to the pancreatic ducts. This can be important because intraductal papillary mu-cinous neoplasms, by definition, involve the duct system, whereas mucinous cystic neoplasms usually do not.

The ampulla of Vater is formed by the confluence of the pancreatic and distal common bile ducts as they pass through the wall of the duodenum and open into the duodenal lumen. Small neo-plasms of the ampulla of Vater are occasionally resected in a procedure known as an ampullec-tomy. In these instances the specimen usually consists of a small disk of duodenal tissue about the size of a quarter. The underside of the disk is composed of transected sections of the pancreatic and bile ducts, the disk itself is traversed by the ducts, and the upper surface is lined by duodenal mucosa, in the center of which is the papilla of Vater.

Identify the bile and pancreatic ducts and submit a shave section of each duct margin. Next, ink the edges of the disk (the duodenal margins) and the aspects of the deep margin not sampled when the duct margins were taken. Then simply bread-loaf the specimen in 2-mm slices along the axis that best demonstrates the relationship between the tumor and the duodenal margin it most closely approaches. Document the gross appearance (e.g., papillary, endophytic), size, and location of any masses; then submit the entire specimen for histologic evaluation.

·   What is the probable site of origin of the tu-mor (bile duct, pancreas, ampulla of Vater, or duodenum)?

·   What is the size of the tumor (in centimeters)?

·   What are the histologic type and grade of the neoplasm? Is an in situ component identified?

·   Does the tumor extend into the peripancreatic soft tissues? If so, does it extend anteriorly or posteriorly?

·   Does the tumor infiltrate blood vessels, lym-phatics, or nerves? Does the tumor extend into the pancreas, duodenum, ampulla of Vater, common bile duct, or spleen?

·   Does the tumor involve any of the margins (pancreatic neck, uncinate, bile duct, soft tissue, and proximal and distal duodenal)?

·            Do the non-neoplastic portions of the pancreas and duodenum show any pathology?