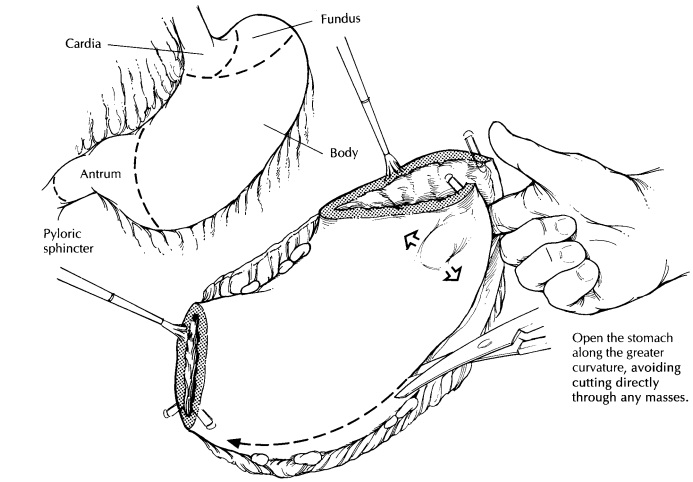 Stomach specimens come in a variety of shapes and sizes depending on the pathologic process for which the stomach is removed. For example, a small portion of stomach may be removed for peptic ulcer disease, while the entire stomach and even adjacent organs can be resected when an infiltrating cancer is present. Regardless of the specimen’s size and shape, a wise approach is to regard every stomach resection as though it potentially harbors a malignant neoplasm. Do not be betrayed by the innocent-looking ulcer. Instead, take care to evaluate the resection mar-gins, adequately sample the lesion, and diligently search for lymph nodes. With this approach, the dissection should always be adequate, even in that rare instance when a carcinoma is incidentally discovered in a benign-appearing ulcer.

The dissection of a stomach specimen begins with a basic understanding of the stomach’s anat-omy. This understanding is important for two reasons: First, the anatomic regions of the stom-ach are functionally and histologically distinct; thus, each region of the stomach should be indi-vidually assessed. Second, anatomic landmarks can be used to orient most stomach specimens. The four divisions of the stomach are the cardia, fundus, body, and antrum. The cardia is the rim of the stomach that surrounds the gastroesopha-geal junction (GEJ). The fundus is the dome-shaped region of the stomach that sweeps superior to the GEJ. The body accounts for the major portion of the stomach. It narrows distally as it merges with the antrum. The antrum is the distal third of the stomach and includes the pyloric sphincter. The anatomic boundaries separating these regions are not distinct, at least not in the unopened specimen. Once the mucosal surface is exposed, however, the demarcation between the body and antrum can be easier to appreciate. For example, the body shows prominent rugal folds, whereas the mucosa of the antrum is compara-tively flat. This flattened antral surface forms a V. The nadir of the V rests on the lesser curvature and points toward the proximal portion of the stomach. Other landmarks that are useful in ori-enting the specimen include the greater curva-ture, the broad and convex inferior aspect of the stomach; the lesser curvature, the concave su-perior aspect of the stomach; and the pyloric ring, a thick muscular collar at the outlet of the stom-ach. In more limited stomach resections, these landmarks may not be present and correct orien-tation relies upon the surgeon’s designation. 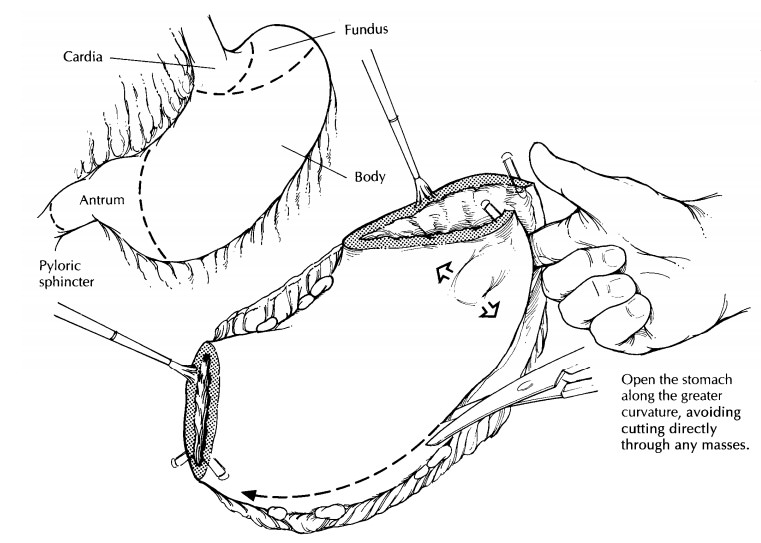 Begin your examination by clearly marking the stomach resection margins. Keep in mind that these margins may be difficult to reconstruct once the specimen has been opened. One simple method is to ink the margins and then place four safety pins—two on either side of the greater curvature at both the proximal and distal mar-gins. By cutting the specimen between these safety pins, you can easily reconstruct the opened speci-men simply by juxtaposing the two pins.

To facilitate handling of the stomach, remove the bulky omenta (when present) suspended from the greater and lesser curvatures of the stomach. Do not discard this fat. Instead, set it aside for later dissection. Next, open the stomach along its entire length, cutting between the safety pins at each stomach orifice. To avoid cutting across the lesion, insert a probing finger into the lumen, and explore the inner surface of the stomach ahead of the advancing scissors. Be flex-ible in your approach. Whenever possible, cut along the greater curvature, but always be ready to tailor the dissection to avoid cutting through a tumor. When the line of excision along the greater curvature is obstructed by a tumor, the lesser curvature may serve as an alternative route for opening the stomach.

Once the stomach is opened, evaluate each of the three layers of the stomach—the mucosa, wall, and serosa. Do the gastric folds appear thickened or effaced? Assess the number, size, location, and appearance of any lesions. For ulcer-ative lesions, carefully note those features that are helpful in distinguishing benign ulcers (e.g., sharply defined margins, smooth and flat bor-ders, straight walls, clean base) from gastric carci-nomas (e.g., irregular margins, thickened and heaped-up borders, shaggy base). Important measurements include not only the dimensions of the lesion but also the distance from the lesion to the resection margins. This distance, known as the gross clearance, should be measured while the specimen is fresh, because the mucosa tends to retract during fixation.

The precise location of the tumor should be documented. For tumors involving the gastro-esophageal junction, every effort should be made to assign a precise site of origin. The gastroesoph-ageal junction is the junction of the tubular esophagus and saccular stomach regardless of the type of epithelium lining the esophagus. Assess the proportion of tumor in the esopha-gus versus the stomach and find the anatomic location of the tumor’s epicenter. If more than 50% of the tumor involves the esophagus the tumor is classified as esophageal, whereas it is classified as gastric if more than 50% involves the stomach.

Next, examine and describe the wall and the serosa of the stomach. Are any mural nodules noted? Is the wall diffusely thickened or focally indurated? Are any serosal lesions noted? Is the serosa retracted? Collect fresh tissue samples for special studies as needed, then pin the specimen flat on a wax tablet, and submerge it in forma-lin until well fixed.

‘‘Better safe than sorry’’ is a wise policy when sampling the stomach. Consider again the pru-dence of viewing each lesion with the suspicion that it represents a malignant neoplasm. Thor-oughly sample all lesions, evaluate every margin, and diligently search for lymph nodes. For lesions that are clinically believed to be peptic ulcers, submit the entire ulcer in a sequential fashion so that an underlying malignancy is not missed. When a tumor is apparent, section through it to determine whether it extends into or through the stomach wall. Be sure to describe its gross configuration (exophytic/polypoid, infiltrative, diffusely infiltrative, expansile/noninfiltrative, ulcerating, or annular). Submit sections from the center of the tumor to determine its maxi-mum depth of invasion. Also submit sections from the tumor’s periphery to demonstrate the transition between the tumor and the adjacent gastric mucosa. When the stomach appears dif-fusely thickened by an infiltrative process (e.g., linitis plastica) submit sections from all four re-gions of the stomach. Margins should generally be sampled using perpendicular sections when the tumor is close, and shave sections when the tumor is far removed. Submit all lymph nodes. Keep the greater and lesser omental node groups separate. A good place to find lymph nodes is at the point where the omenta attach to the stomach.

The grossly uninvolved stomach should also be sampled for histologic evaluation. Depending on the extent of the resection, these sections should represent all four regions of the stomach, the squamocolumnar junction, and if present the contiguous esophagus. For extended resections that include adjacent colon, spleen, liver, and/or pancreas, sections should be taken to determine the presence of direct tumor extension, tumor metastases, and the adequacy of surgical excision (i.e., the status of the margins).

Photography plays an important role in the eval-uation of stomach specimens. Sections taken for histology can be mapped with considerable detail on Polaroid or digital photographs of the speci-men. This is a useful method for correlating the histologic features with the anatomic region of the stomach.

Important Issues to Address in Your Surgical Pathology Report on Gastrectomies

·  Is there invasion into the esophagus or stomach? Is there blood/lymphatic vessel invasion? Is there perineural invasion?

·            What is the extent of the neoplasm? Specify into which level of the wall of the stomach the tumor invades (e.g., mucosa, submucosa, muscularis propria, subserosal soft tissues, or serosa). Does the tumor extend beyond the serosa to involve adjacent structures?

·  What is the condition of the non-neoplastic stomach (e.g., changes of Helicobacter pylori gas-tritis or presence of intestinal metaplasia, dysplasia, atrophy, adenomas, or ulceration)?