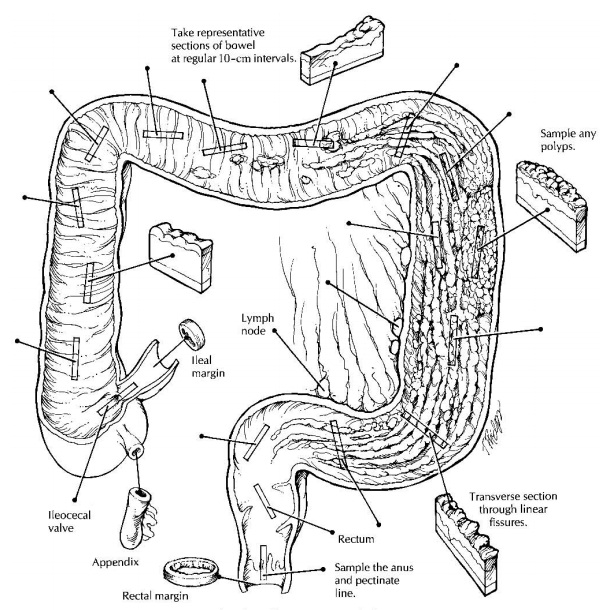 Proper tissue orientation is a critical part of the histologic evaluation of biopsies of the gastrointestinal tract.

Proper tissue orientation is a critical part of the histologic evaluation of biopsies of the gastroin-testinal tract. Tissue orientation is a two-step pro-cess that involves the coordinated actions of the endoscopist and the histotechnologist. The en-doscopist should mount the biopsy mucosal-side up on an appropriate solid surface (e.g., filter paper) and place it in fixative. This first step should be done immediately, in the endoscopy suite, so that the specimen does not dry out en route to the surgical pathology laboratory. The histotechnologist can then embed and cut the biopsy specimen perpendicular to the mounting surface. If the specimen is free-floating, great care must be taken to identify the mucosal surface for proper embedding. Multiple sections should be cut from each tissue block for histologic evalua-tion. Step sections are preferred to serial sections so that intervening unstained sections are avail-able for special stains as needed.

Resections of Small and Large Intestine for Inflammatory Bowel Disease

Given the structural simplicity of the intestinal tract and the ease with which the bowel can be opened, there is a strong tendency to rush into these dissections without thinking ahead. The ap-proach to the non-neoplastic bowel specimen requires an effective strategy that gives careful consideration to an organized gross description, specimen photography and fixation, and details of dissection and tissue sampling.

A good gross description not only describes all the relevant gross findings but presents these findings in an organized fashion. This can be a difficult task in bowel resections, where the speci-men may consist of more than one structure (e.g., ileum, appendix, cecum, and colon). Organize your gross description. First, describe the speci-men after it has been examined and at least par-tially dissected. This will make it possible to collect all of the gross findings and integrate them into an organized statement. Second, always de-scribe each component of the resection as an indi-vidual unit. For example, describe the mucosa, wall, and serosa of the ileum and then move on to the appendix, cecum, and finally the colon. Third, focus on the mucosa. Begin by describ-ing the distribution of mucosal alterations (e.g., diffuse, discontinuous) and then describe the specific characteristics of these changes (e.g., ul-cerated, granular). Of course, no gross descrip-tion is complete without a description of the wall, serosa, and mesentery; but for inflammatory bowel disease, a less detailed description of these layers will generally suffice.

Given the structural simplicity of the bowel, opening these specimens is generally straightfor-ward. When possible, the small intestine should be opened adjacent to the mesentery. In contrast, the large intestine should be opened on the anti-mesenteric border along the anterior (free) teniae coli. Remove the mesentery before fixing the bowel. Treat the mesenteric soft tissues as though a carcinoma will be discovered in the bowel resec-tion, keeping in mind that carcinomas may arise in the setting of long-standing inflammatory bowel disease. 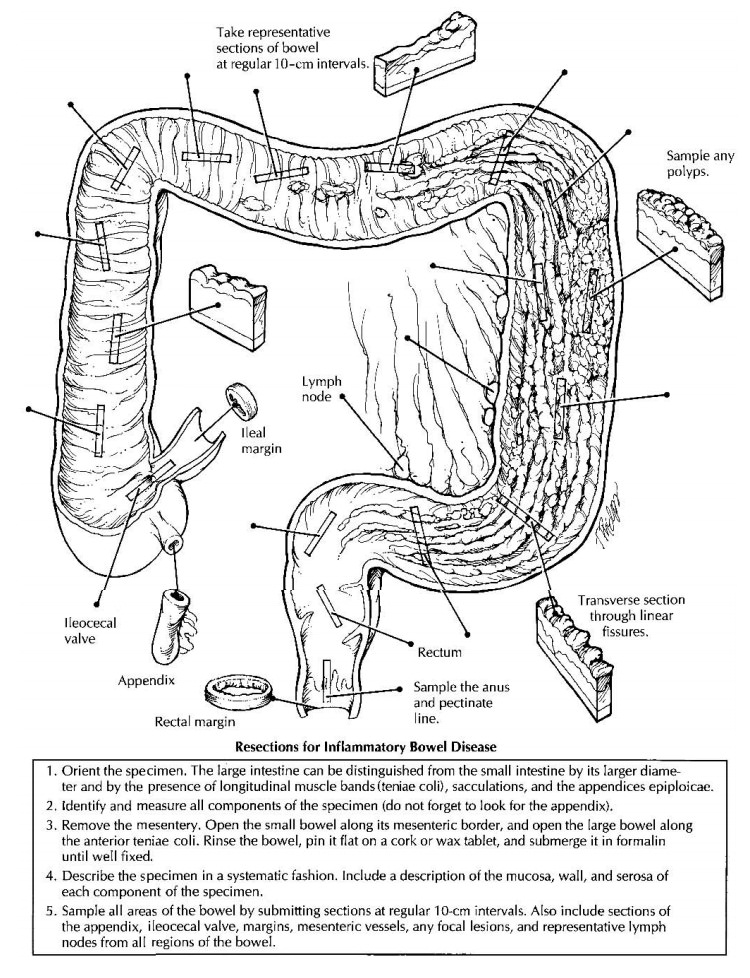 In general, the bowel should be fixed before it is photographed, described, and sectioned. Subtle mucosal alterations (e.g., erosions, ulcerations, areas of hemorrhage) that may not be apparent in the fresh specimen are often well defined once the specimen is fixed. In most cases, the specimen can be opened and pinned on a solid surface as a flat sheet and then submerged in formalin. Some specimens may be so distorted that they cannot be easily opened and pinned flat without the risk of cutting across structures (e.g., fistulae, diverti-cula) and disrupting important relationships. These distorted specimens may be best handled by infusing formalin into the lumen of the bowel and then clamping both ends of the specimen. Whether the bowel is submerged or infused, fecal material should first be rinsed from the muco-sal surface (a more formidable challenge in the unopened specimen) using a gentle stream of an isotonic solution.

Photographs of the specimen should be liberally taken to document further the gross findings, es-pecially the distribution and nature of the muco-sal alterations. Photograph the specimen after it has been opened and fixed. Photographs of the unopened bowel are generally useless. Fixation tends to both accentuate the mucosal alterations and reduce the amount of reflected light. Always position the specimen anatomically on the photography table. Total colectomies, for ex-ample, should be positioned so that the ascending colon is to the anatomic right, the descending colon is to the left, and the transverse colon is to the top and center. Finally, include close-up photographs to illustrate the details of the mucosal pathology.

To evaluate the distribution of inflammatory changes in the specimen, all areas of the bowel should be sampled for histologic evaluation. One method that consistently ensures adequate sam-pling is to submit representative sections at 10-cm intervals, beginning at the distal end of the specimen and proceeding proximally in a step-wise fashion. This not only will ensure that the mucosa is well sampled but will also provide information on the distribution of the disease process. Of course, sections of any focal lesions such as ulcers or polyps should be submitted in addition to these interval sections. Sections should also be taken of the appendix and the ileocecal valve when these structures are present. When no tumor is grossly apparent, the resection margins may be taken as shave sections. In addi-tion to sampling the mesentery for lymph nodes, submit sections of mesenteric blood vessels and of any focal lesions such as fistula tracts or areas of fat necrosis. Indicate the site from which all sections were taken on the Polaroid or digital photographs. Take longitudinal sections (i.e., par-allel to the teniae coli). Exceptions are permitted when, for example, a linear ulcer is best demon-strated by a transverse section through the bowel.

Once these principles regarding gross descrip-tion, fixation, dissection, and sampling are mas-tered, the inflammatory bowel specimen can be handled with relative ease. The initial step is to identify the structures that are present in the re-sected specimen. The large intestine is readily distinguished from the small intestine by its larger diameter and the presence of longitudinal muscle bands (the teniae coli), sacculations (the haustra), and the appendices epiploicae. In addi-tion, the small intestine shows mucosal folds that stretch across the entire circumference of the bowel, whereas the mucosal folds of the large in-testine are discontinuous. Several features may be helpful in appreciating the various regions of the large intestine. The cecum is usually quite apparent, and it can be used to identify the origin of the ascending colon. The transverse colon can be recognized by its large mesenteric pedicle attachment, while the sigmoid colon has a rela-tively short mesenteric pedicle. When a portion of rectum is included in the specimen, it can be distinguished from the sigmoid colon by the absence of a peritoneal surface lining.

The initial description should be limited to a list of the structures present and the dimensions of each. Further handling of the bowel is facili-tated by removing the mesenteric fat. As de-scribed previously, these soft tissues should be removed according to their anatomic location, and each portion should be clearly labeled so it can be easily identified and retrieved. Most pro-sectors have an easier time finding mesenteric lymph nodes while these tissues are still in the fresh state. Remember, most of the lymph nodes are found at the junction of the bowel and mesen-teric fat. Open the bowel along its entire length, cutting the small bowel along its mesenteric at-tachment and the large bowel along the anterior teniae. Gently rinse any fecal material from the mucosal surface using a stream of isotonic solu-tion. Pin the opened bowel flat on a solid surface, and submerge it in formalin.

Once the specimen is fixed, complete the exam-ination of the mucosa, noting in the gross descrip-tion the distribution and characteristics of the mucosal alterations. Place the bowel in its correct anatomic position, and photograph it. Take a Polaroid or digital photograph of the entire specimen, so that the sites from which histologic sections were taken can be indicated on the image, and take close-up views of focal lesions.

Remember to section all regions of the bowel by using a method of stepwise sectioning at regu-lar (i.e., 10-cm) intervals. Specific bowel sections should include the proximal and distal resection margins, the ileocecal valve, the appendix, and any focal lesions. If a neoplasm is not found, sam-pling of representative lymph nodes from each level will suffice. Sampling of the mesentery should also include a section of the mesenteric blood vessels and sections of any focal lesions.

·   What disease processes are present, and what is their location?

·   For inflammatory processes, are any diver-ticula, strictures, fistulae, or perforations present?

·   Does the mucosa show any preneoplastic or neoplastic changes?

·   Do the lymph nodes show any evidence of an inflammatory process or metastatic disease? Record the number of lymph nodes examined and the presence or absence of lymph node metastases.

·   What is the status of the mesenteric vessels?