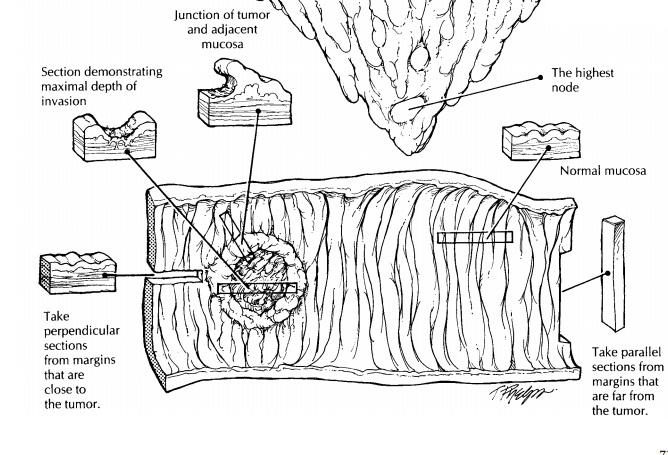 Polyps of the gastrointestinal tract are usually removed endoscopically by a single incision at the base of the polyp stalk.

Polyps of the gastrointestinal tract are usually removed endoscopically by a single incision at the base of the polyp stalk. Although these speci-mens lack the size and complexity of more extended bowel resections, they are delicate structures that require meticulous processing. First, obtain relevant clinical information such as the patient’s history, the endoscopic findings, and the anatomic site from which the polyp was re-moved. Next, turn your attention to the specimen itself. The polypectomy specimen poses three important questions to the surgical pathologist:

Are adenomatous changes present? (2) Is in-filtrating carcinoma present, and if it is does it infiltrate into the stalk? (3) Do any of the neoplas-tic changes extend to the resection margin at the base of the stalk? Clearly, the polypectomy speci-men must be carefully oriented and processed so that these issues can be addressed.

The key to orienting the polyp is to find its stalk. This may require careful inspection, since a short stalk is often overshadowed by the much larger head of the polyp. After finding the stalk, mark its base (i.e., the resection margin) with either ink or colored tattoo powder. Measure the height and diameter of the polyp. Next, place the speci-men in formalin for fixation. Given the soft and spongy consistency of the fresh polyp, sectioning the polyp is greatly facilitated if it is well fixed.

Once fixed, the specimen should be sectioned in a way to show the relationship of the stalk to the head of the polyp. As illustrated, this relation-ship is usually best demonstrated by trisecting the polyp into two lateral caps and one median section that includes the stalk and the center of the head. The median section should demonstrate the largest cross-sectional area of the head of the polyp, its interface with the stalk, and the surgical margin. The importance of trisecting the polyp is readily apparent if one pauses to consider the impact of this method on the his-tologic sections. Serial sections into the median section of a trisected polyp will approach the point of interest, the center of the polyp. To avoid missing a small focus of carcinoma, submit the entire specimen for histologic evaluation.

Important Issues to Address in Your Surgical Pathology Report on Polyps

·   What is the histologic type of the polyp (e.g., adenomatous, hyperplastic, hamartomatous, inflammatory)?

·   For adenomatous polyps, is the polyp architec-turally tubular, villous, or tubulovillous?

·   Is there evidence of vascular invasion?

·            What is the status of the resection margin at the base? Measure (in millimeters) the distance from the deepest part of the invasive carcinoma component to the nearest polyp margin. Does the adenomatous epithelium or the infiltrating carcinoma extend to this margin? 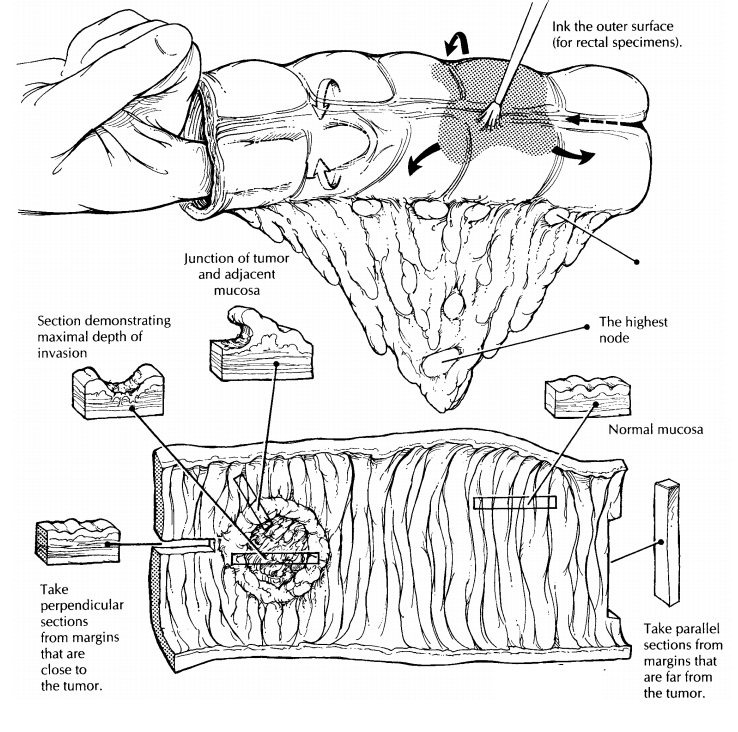