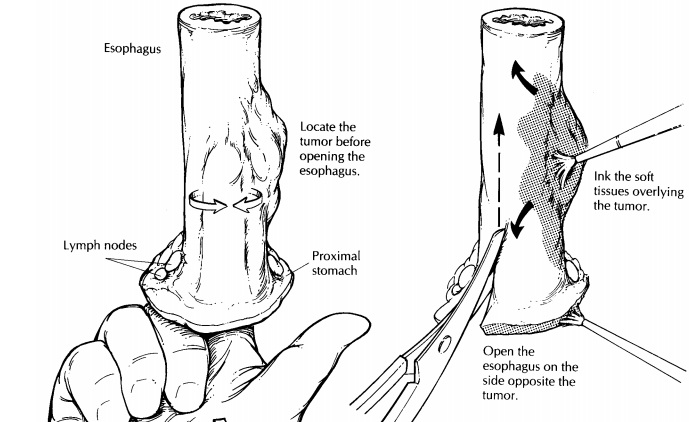 Esophagectomies are almost always performed to resect neoplastic processes. The nature and extent of the neoplastic process, however, may be quite variable. Lesions may range from micro-scopic alterations in patients with a long history of Barrett’s esophagus to large fungating carcino-mas in patients presenting with obstruction and dysphagia.

Esophagectomy specimens (either segmental esophagectomy or esophagogastrectomy) are ana-tomically simple structures consisting essentially of a straight muscular tube. Orientation is seldom difficult, since a cuff of stomach is usually re-sected in continuity with the distal portion of esophagus. After measuring the dimensions of the specimen, ink its outer surface and the mucosal margins. The esophagus, you will recall, does not have a serosa. Rather, the surface of the soft tis-sues investing the esophagus represents a true soft tissue margin.

Next, open the esophagus to expose the muco-sal surface. As illustrated, this step involves cut-ting through the wall of the esophagus from one end of the specimen to the other. A common mistake is to cut directly across the tumor. This can be a costly error, since it distorts the appear-ance of the tumor and disrupts the tumor’s rela-tionship with underlying structures. Fortunately, this can easily be avoided by first localizing the tumor and then cutting through the esophageal wall on the opposite side. The key, of course, is to pay close attention to the location of the tumor before heedlessly wielding the scissors. Begin by palpating the unopened esophagus. Areas of in-duration often divulge the location and extent of an infiltrating tumor. Next, cut the esophagus in a stepwise fashion: Inspect the lumen with a probing finger, and then advance the scissors one cautious cut at a time. 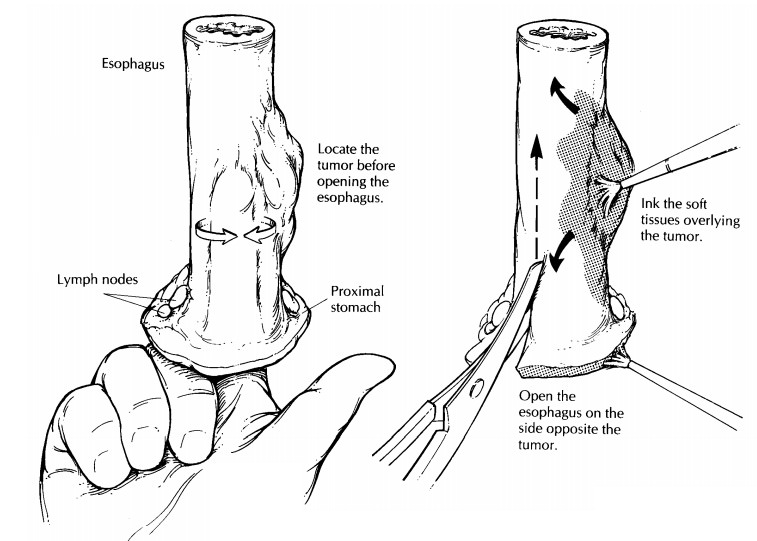 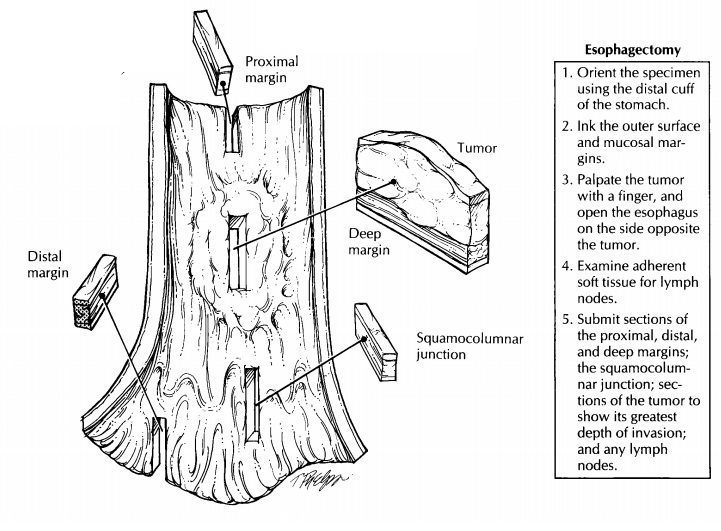 Once the specimen is opened, observe the ap-pearance and thickness of the esophageal wall. If strictures are present, measure the luminal cir-cumference of the esophagus at the point of narrowing and at the point of maximal dilatation proximal to the stricture. Carefully inspect the mucosa. If a tumor is not seen, try to identify the site of a previous biopsy. Biopsy site changes can be subtle. Look for focal areas of mucosal hemorrhage, ulceration, scarring, and puckering. Identify the gastroesophageal junction (GEJ), the point at which the tubular esophagus joins the saccular stomach. It is usually located 1 to 2 cm from the proximal edges of the gastric folds. Keep in mind that the GEJ does not always correlate with the squamocolumnar mucosal junction. Rather, the squamocolumnar junction normally may occur anywhere within the distal 2 to 3 cm of esophagus. The gastric mucosa is velvety red, and it contrasts sharply with the smooth gray appearance of the squamous epithelium lining the esophagus. Proximal extension of the squa-mocolumnar junction beyond the distal 2 to 3 cm of the esophagus is abnormal and suggestive of Barrett’s esophagus.

If a tumor is apparent, note its dimensions (give three dimensions) and its location with respect to the squamocolumnar and gastroesophageal junctions. Note the configuration of the tumor (exophytic/fungating, endophytic/ulcerating, dif-fuse infiltrative).

This distinction is of clinical significance, as stag-ing criteria differ according to the site: The AJCC staging system recognizes N0 and NI for esopha-geal cancers, whereas N0, N1, N2 and N3 desig-nations are used for staging gastric cancers.

The following should be noted: (1) the propor-tion of tumor located in the esophagus versus that in the stomach; (2) the greatest dimensions of each individual component; (3) the anatomic site of the center of the tumor. (If more than 50% of the tumor involves the esophagus, the tumor is staged as esophageal, whereas if more than 50% involves the stomach, the tumor is staged as gas-tric.); and 4) the distance of the tumor’s edges from the margins of resection. The distance of the tumor to the resection margin should always be measured in the fresh specimen; fixation causes the mucosa to retract, giving the appear-ance that the mucosal margins are closer to the tumor than they actually are. Photograph the opened specimen to document the gross findings. Before placing the specimen in formalin, ask yourself if fresh tissue should be submitted for special studies. Pin the specimen flat onto a wax tablet, and submerge it in formalin until well fixed.

Once the specimen is fixed, section through the full thickness of the tumor and the underlying wall to determine the level and depth of tumor extension. Submit at least two full-thickness sec-tions of the esophagus at the level where it ap-pears most deeply penetrated by the tumor. Be sure that these sections include the inked soft tissue surface (radial margin) so that this margin can be assessed. Also take sections of tumor to demonstrate its relationship to the adjacent mucosa, and liberally sample areas of Barrett’s mucosa. In those cases where a tumor is not grossly apparent, three specific areas should be entirely submitted for histologic evaluation:

Carefully dissect the soft tissues investing the esophagus for lymph nodes. Most of these lymph nodes will be found in the region of the gastro-esophageal junction. Submit each lymph node found for histologic evaluation.

Important Issues to Address in Your Surgical Pathology Report on Esophagectomies

·   In which portion of the esophagus does the tumor arise (cervical, upper thoracic, midtho-racic, lower thoracic)?

·   What are the histologic type and grade of the tumor?

·   What are the size, location, and depth of max-imum invasion of the tumor? Is it in situ? If invasive, into which level does it invade (lamina propria or submucosa, muscularis pro-pria, adventitia, or adjacent structures)?

·   Is there invasion into the stomach? Is there lym-phatic/vascular space invasion?

·   Does the tumor involve any resection margins? Specifically, what is the status of the proxi-mal (esophageal), distal (stomach), and deep (radial) margins.

·   What is the condition of the non-neoplastic/ preneoplastic esophagus? For example, are there changes of Barrett’s esophagus, dyspla-sia, inflammation, or infection? 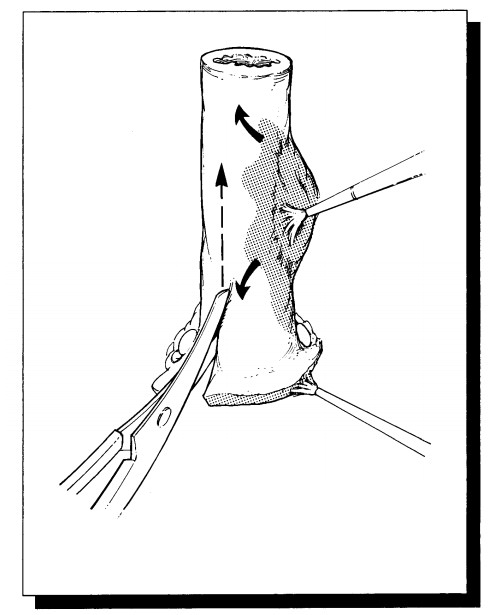