Neck dissections for the en bloc removal of cervical lymph nodes come in a variety of shapes and sizes.

Neck dissections for the en bloc removal of cervi-cal lymph nodes come in a variety of shapes and sizes. The radical neck dissection is the stan-dard procedure to which all other neck dissec-tions are compared. It includes resection of the sternocleidomastoid muscle, the internal jugular vein, the spinal accessory nerve, and the lymph nodes from levels I to V. The goal of the surgical pathologist in evaluating these specimens is simply to identify the number of lymph nodes involved by tumor at each level.

Start by orienting the specimen. The dissection is shaped like a Z. The pink-tan, lobulated sub-mandibular gland is usually easy to identify, and it occupies level I, the most anterosuperior aspect of the specimen. The internal jugular vein, as its name implies, is present on the internal (medial) surface of the sternocleidomastoid muscle. Using these two anatomic landmarks, one can both orient the specimen and determine which side it was taken from. After orienting the specimen, measure its overall dimensions. Next, open the jugular vein along its length, and look for tu-mor involvement or thrombosis. Sample any abnormality in the vein.

The specimen can now be divided into its five levels and each level separately dissected for lymph nodes. First, dissect off level I, which in-cludes the submandibular salivary gland and the triangle of soft tissues anterior to the sternoclei-domastoid muscle. Next, remove level V, the triangle of fatty connective tissue posterior to the muscle. Finally, levels II, III, and IV can be separated off by dividing the sternocleidomas-toid muscle into equal thirds. Level II, the upper jugular group, is composed of the lymph nodes around the upper third of the sternocleidomas-toid muscle. Level III, the middle jugular group, is composed of the lymph nodes around the middle third of the sternocleidomastoid mus-cle, and level IV, the lower jugular group, is composed of lymph nodes around the lower third. Now search for the lymph nodes. The best place to look for lymph nodes in each level is in the fatty connective tissue. Lymph nodes usually will not be found within the sternoclei-domastoid muscle itself. Section each lymph node at 2- to 3-mm intervals along its long axis. If the lymph node is grossly uninvolved by tumor, submit the entire lymph node for histo-logic examination. If the lymph node is grossly involved by tumor, measure the size of the im-plant and submit two sections of the metastasis. Be sure that these two representative sections include the lymph node capsule along with a rim of the perinodal fat so you will be able to determine the presence or absence of extranodal tumor spread. In addition, the salivary gland in level I should be measured, described, and serially sectioned. If any masses are found in the salivary gland, If no abnor-malities are grossly apparent, simply submit a representative section for histology. Finally, representative sections of any tumor involving the sternocleidomastoid muscle or extranodal soft tissue should be submitted for histology. If a group of matted lymph nodes is present, it will be impossible to dissect out each individual lymph node. In these cases, submit two sections through each level involved to document the extensive nature of the tumor. 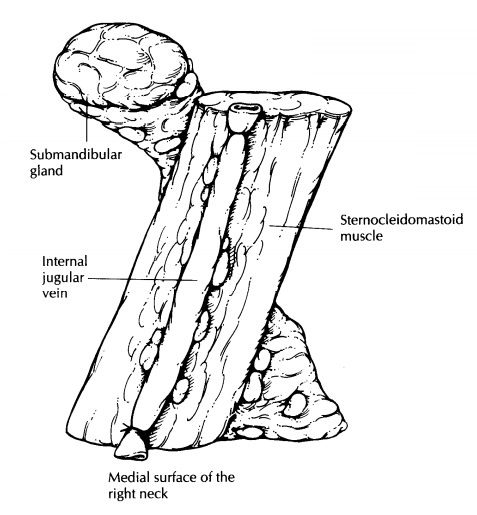 A number of variations of the neck dissection exist. These are well described by Robbins and co-workers.2 In a modified neck dissection, for example, lymph nodes from levels I through V are removed, but one or more of the three major structures (internal jugular vein, spinal accessory nerve, sternocleidomastoid muscle) is not in-cluded in the dissection. Selective neck dissections differ from radical and modified neck dissec-tions in that lymph nodes from only some of the five levels are removed. Each of these can be dissected using the same approach outlined above. First, orient the specimen. Without im-portant land marks (e.g., submandibular gland, internal jugular vein), you will usually have to rely on the surgeon to designate each level. Second, identify the lymph nodes at each level. Third, submit each node for histology.

·   What is the total number of lymph nodes pres-ent at each level, and how many of these are involved by tumor?

·   What is the size of the largest metastasis?

·   Does the carcinoma extend beyond the lymph node and into extranodal soft tissue?

·   Is the internal jugular vein thrombosed and/ or infiltrated by tumor?

·   Do the salivary glands, muscle, and soft tissues contain tumor or any other pathology?