Coal is a solid fossil fuel formed in several stages as buried remains of land plants that lived 300-400 million years ago were subjected to intense heat and pressure over millions of years.

2. The carbon content of bituminous, lignite and peat are 80, 70 and 60% respectively

3. India has about 5% of world’s coal. Indian coal is not good because of poor heat capacity.

3. When coal is burnt it produces CO2 causes global warming

2. Since coal contains impurities like S and N, it produces toxic gases during burning.

Hydrocarbons are separated by fractioning the crude oil.

At the present rate of usage, the world’s crude oil reserves are expected to get exhausted in just 40 years.

1. The petroleum gas, converted into liquid under high pressure as LPG

2.   LPG is colorless and odorless gas.

3. During bottling some mercaptans is added, to detect leakage of LPG from the cylinder.

3. Mixture of 50-90% methane and small amount of other hydrocarbons. 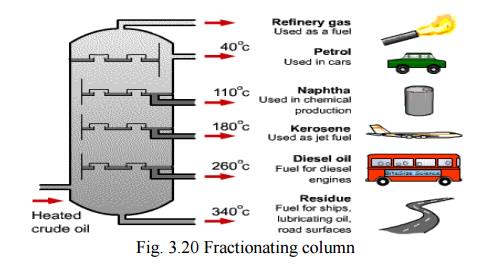 If the natural gas contains lower hydrocarbons like methane and ethane, it is called dry gas.

If the natural gas contains higher hydrocarbons like propane, butane along with methane it is called wet gas.

Formed by the decomposition of dead animals and plants, those were buried under lake and ocean, at high temperature and pressure for millions of years.