India has 10 nuclear reactors, which produce 2% of India’s electricity.

India has 10 nuclear reactors, which produce 2% of India’s electricity.

Heavier nucleus is split into lighter nuclei, on bombardment by fast moving neutrons, and a large amount of energy is released.

When U235 nucleus is hit by a thermal neutron, it undergoes the following reaction with the release of 3 neutrons.

Each of the above 3 neutrons strikes another U235 nucleus causing (3x3) 9 subsequent reactions. These 9 reactions further give rise to (3x9) 27 reactions.

This process of propagation of the reaction by multiplication in threes at each fission is called chain reaction.

Fission reaction of U235 is given below. 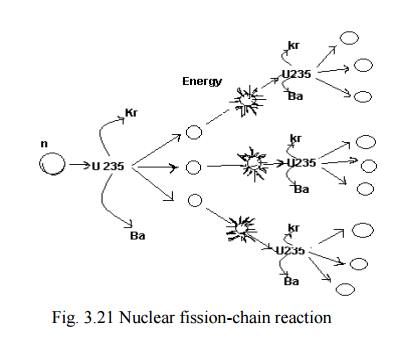 Lighter nucleuses are combined together at extremely high temperatures to form heavier nucleus and a large amount of energy is released.

Fusion of H21 .Two hydrogen-2 (Deuterium) atoms may fuse to form helium at 1 billion0C with the release of large amount of energy

The importance of solar energy can be emphasized particularly in view of the fact that fossil fuels and other conventional sources are not free from environmental implications.

least pollution, safety and security snags and are universally available have the best enhance of large scale utilization in future

The dangerous radiowaste cannot be buried in land without the risk of polluting soil and underground water.

Nor the waste can be dumped into the rivers without poisoning aquatic life and human beings as well The burning of coal, oil, wood, dung cakes and petroleum products has well debated environmental problems. The smoke so produced causes respiratory and digestive problems leading to lungs, stomach and eye diseases.

The disposal of fly ash requires large ash ponds and may pose a severe problem considering the limited availability of land. Thus the non-conventional sources of energy are needed.

To provide more energy to meet the requirements of increasing population.

To reduce safety and security risks associated with the use of nuclear energy.