The energy that we get directly from the sun is called solar energy.

The nuclear fusion reactions occurring inside the sun release enormous amount of energy in the form of heat and light.

The solar energy received by the near earth space is approximately3.4 kJ/s/m2 known as solar constant.

There by potential difference between two layers is created, which causes flow of electrons (ie.,an electric current) 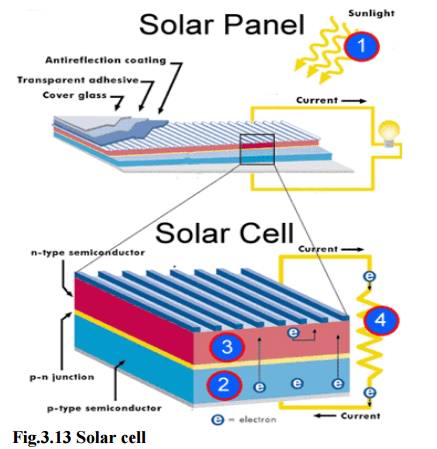 When a large number of solar cells are connected in series it form a solar battery.

Solar battery produce more electricity which is enough to run water pump, to run street-light, etc., They are used in remote areas where conventional electricity supply is a problem.

Solar heat collectors consists of natural materials like stones, bricks, (or) materials like glass, which can absorb heat during the day time and release it slowly at night. 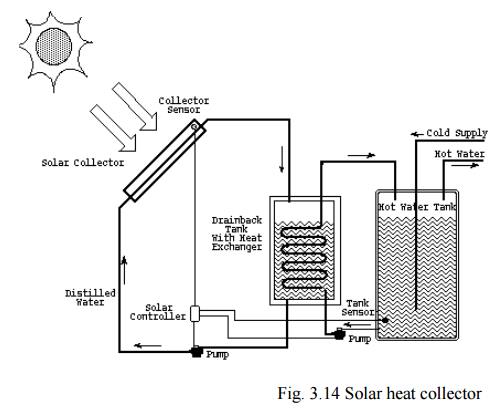 An insulated box inside of which is painted with black paint. Provided with a glass lid to receive and store solar heat.

Inside the box it has black painted copper coil, through which cold water is allowed to flow in, which gets heated up and flows out into a storage tank.

From the storage tank water is then supplied through pipes.

Energy recovered from the force of the wind is called wind energy.

The energy possessed by wind is because of its high speed.

The wind energy is harnessed by making use of wind mills.

The strike of blowing wind on the blades of the wind mill makes it rotating continuously.

The rotational motion of the blade drives a number of machines like water pump, flour mills and electric generators. 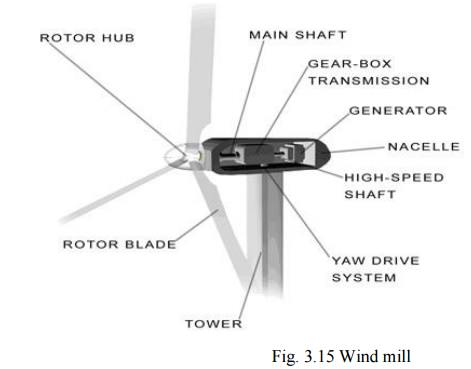 When a large number of wind mills are installed and joined together in a definite pattern it forms a wind farm.

The wind farms produce a large amount of electricity.

The minimum speed required for satisfactory working of a wind generator is 15 km/hr.

It does not cause any air pollution

It is very cheap.

It can be generated by following ways.

The “high tide” and “low tide” refer to the rise and fall of water in the oceans.

The tidal energy can be harnessed by constructing a tidal barrage.

During high tide, the sea-water is allowed to flow into the reservoir of the barrage and rotates the turbine, which intern produces electricity by rotating the generators.

During low tide, when the sea level is low, the sea water stored in the barrage reservoir is allowed to flow into the sea and again rotates the turbine. 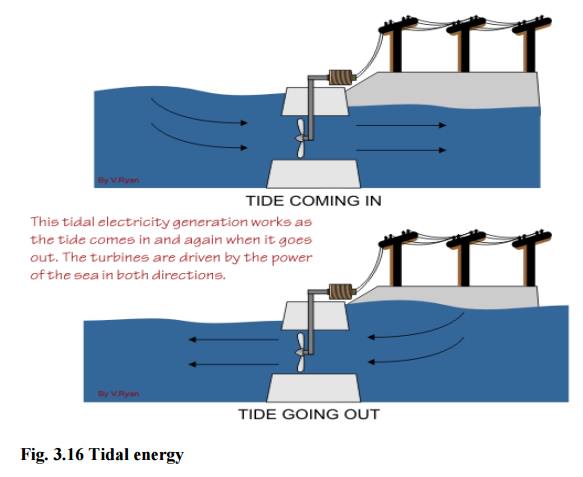 There is often large temperature difference between the surface level and deeper level of the tropical oceans.

This temperature difference can be utilized to generate electricity.

The energy available due to the difference in temperature of water is called ocean thermal energy. 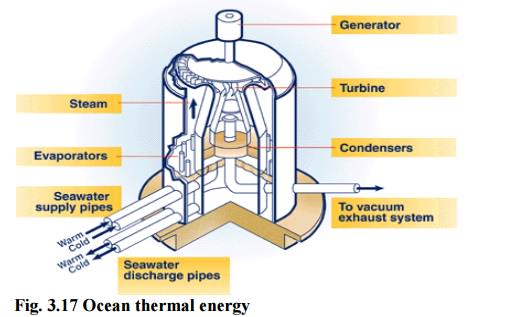 The temperature difference should be of 200C or more is required between surface water and deeper water.

The warm surface water of ocean is used to boil a low boiling liquid like ammonia.

The high vapour pressure of the liquid, formed by boiling is then to turn the turbine of the generator and generates electricity.

The cold water from the deeper ocean is pumped to cool and condense the vapour into liquid.

3. Temperature of the earth increases at a rate of 20-750C per km, when we move down the earth surface.

2. High temperature and high pressure steam fields exists below the earth’s surface in many places.

3. The energy harnessed from the high temperature present inside the earth is called geothermal energy.

In some places, the hot water (or) steam comes out of the ground through cracks naturally in the form

In some places, we can artificially drill a hole up to the hot region and by sending a pipe in it, we can make the hot water or steam to rush out through the pipe with very high pressure.

Thus, the hot water (or) steam coming out from the natural (or) artificial geysers is allowed to rotate the turbine of a generator to produce electricity. 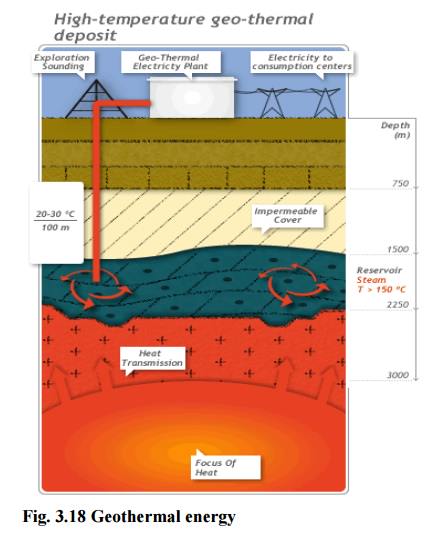 Biomass is the organic matter, produced by plants or animals, used as sources of energy. Most of the biomass is burned directly for heating, cooling and industrial purposes.

Mixture of methane, carbondioxide, hydrogen sulphide, ete. It contains about 65% of methane gas as a major constituent

Biogas is obtained by the anaerobic fermentation of animal dung or plant wastes in the presence of water.

Biofuels are the fuels, obtained by the fermentation of biomass.

Ethanol can be easily produced from the sugarcane. Its calorific value is less when compared to petrol, and produces much less heat than petrol.

Methanol can be easily obtained from ethanol or sugar-containing plants.

Its calorific value is also too low when compared to gasoline and diesel.

Gasohol is a mixture of ethanol+gasoline.

In India trial is being carried out to use Gasohol in cars and buses.

Gasohol is common fuel in Brazil and Zimbabwe for running cars and buses.

Methanol is very useful since it burns at a lower temperature than gasoline or diesel. Due to its high calorific value, hydrogen can serve as an excellent fuel.

Moreover it is non-polluting and can be easily produced.

Presently H2 is used in the form of liquid hydrogen as a fuel in spaceships.

Hydrogen can be produced by thermal dissociation or photolysis or electrolysis of water. It possesses high calorific value. 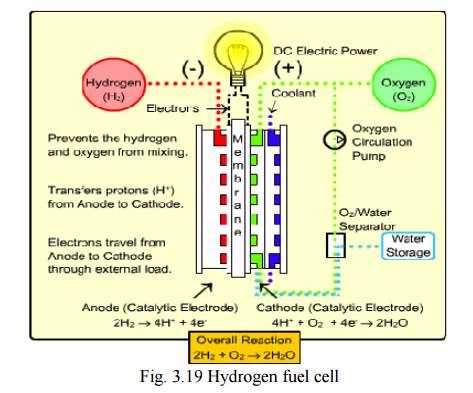 Hydrogen is highly inflammable and explosive in nature

It is difficult to store and transport.