The physiological processes that begin with cardiac sar-colemmal membrane depolarization and culminate in contraction are collectively defined as myocardial exci-tation–contraction coupling.

The physiological processes that begin with cardiac sar-colemmal membrane depolarization and culminate in contraction are collectively defined as myocardial exci-tation–contraction coupling. Depolarization of the car-diac myocyte sarcolemmal membrane during the action potential results in the intracellular entry of extracellu-lar calcium. The major regulators of the transsarcolem-mal entry of calcium include L-type calcium channels and autonomic receptors (Fig. 15.1). These membrane-bound proteins all contribute to the influx of a minute quantity of calcium from outside the cell into the myo-cyte. The entry of this small quantity of calcium causes the release of the large reservoir of calcium stored in the sarcoplasmic reticulum (SR) through the SR cal-cium release channel (ryanodine receptor). This large reservoir of calcium interacts with tropomyosin to allow the actin and myosin filaments to overlap, resulting in systolic myocardial contraction. Diastolic relaxation re-sults from the resequestration of this large reservoir of calcium back into the sarcoplasmic reticulum through the SR calcium adenosine triphosphatase (ATPase). Calcium exits the cell through the NA+ –Ca++ exchanger and sarcolemmal Ca++ ATPase. 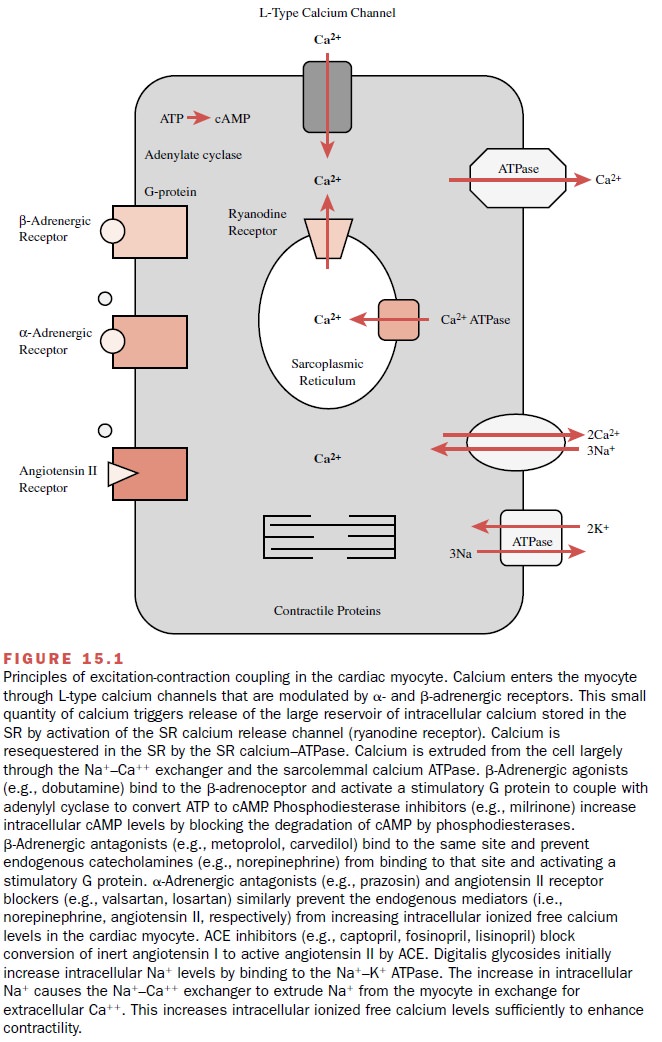 Autonomic receptors further regulate calcium influx through the sarcolemma (Fig. 15.1). β-Adrenergic stim-ulation results in the association of a catalytic subunit of a G protein coupled to the β-receptor. This stimulates the enzyme adenylyl cyclase to convert ATP to cyclic adenosine monophosphate (cAMP). Increasing cAMP production results in a cAMP-dependent phosphoryla-tion of the L-type calcium channel and a subsequent in-crease in the probability of the open state of the chan-nel. This translates to an increase in transsarcolemmal calcium influx during phase 2 (the plateau phase) of the cardiac muscle action potential. The effects of transient increases in intracellular levels of cAMP are tightly con-trolled by phosphodiesterases and phosphatases that prevent indefinite phosphorylation and activation of regulatory proteins. α-Adrenoceptor stimulation results in the phospholipase C–mediated breakdown of phos-phatidylcholine to inositol triphosphate and diacyl glyc-erol; these second messengers further enhance mobi-lization of both transsarcolemmal calcium influx and SR calcium efflux.

The maintenance of a resting membrane potential in cardiac myocytes, as well as all cells, depends on meta-bolic energy (ATP) that is used by the NA+ –K+ ATPase to drive the gradients for NA+ and K+ between the in-tracellular and extracellular spaces. Cardiac glycosides are known to bind to this protein.