Triggered activity occurs when after-depolarizations in-duced by a preceding action potential raise the resting membrane potential above the threshold value, leading to an additional action potential.

Early after-depolarizations and the associated ven-tricular arrhythmia can be prevented or suppressed by the appropriate adjustment of plasma potassium and/or magnesium concentrations. Lidocaine or procainamide may be effective for termination of the arrhythmia. 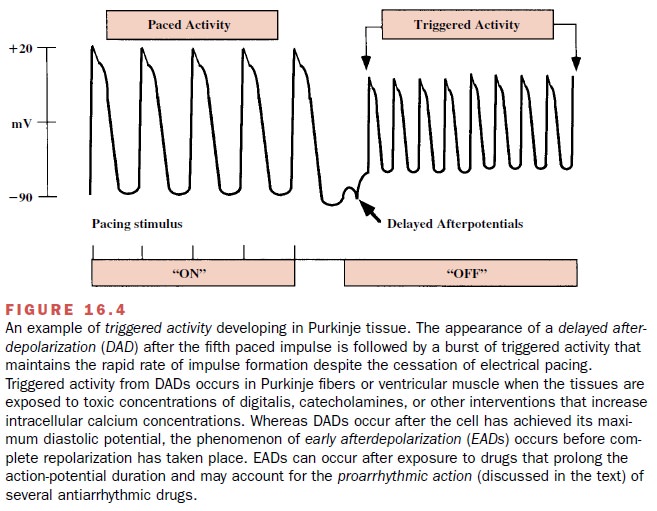 Delayed after-depolarizations (Figure 16.4) may oc-cur in the presence of a rapid heart rate, digitalis glyco-sides, hypokalemia, hypercalcemia and catecholamines. Each of these influences ultimately leads to an increase in intracellular ionized calcium that is known to activate an inward ionic current. The inward ionic current acti-vates a nonselective channel that normally is involved with the transport of sodium but that under pathophys-iological conditions may permit the movement of sodium or potassium ions. Upon reaching threshold, the calcium-induced oscillatory potentials lead to the pro-duction of a sustained ventricular arrhythmia. Delayed after-depolarizations, in contrast to early after-depolar-izations, are more likely to produce triggered tachy-arrhythmias during periods of short pacing cycle lengths (rapid heart rates). Exercise-induced ventricular tachy-cardia in persons without overt cardiac disease exem-plifies such a situation. The electrophysiological abnor-mality is catecholamine dependent and calcium sensitive. The arrhythmia may respond to L-type cal-cium channel antagonists or inhibitors of the cardiac Î˛-adrenoceptor. Each of these approaches would serve to reduce the tissue calcium concentration.