Reentry is an abnormality of impulse conduction wherein an excitatory wavefront circulates around an inexcitable region. 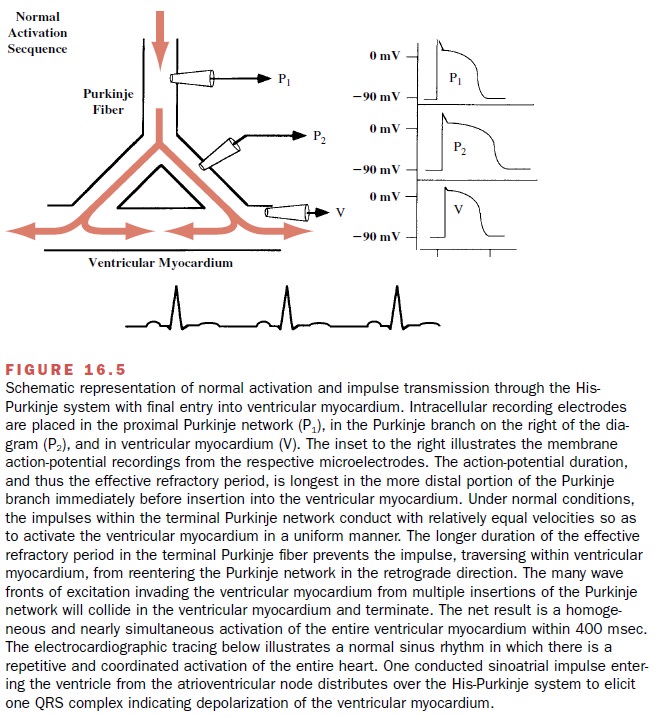 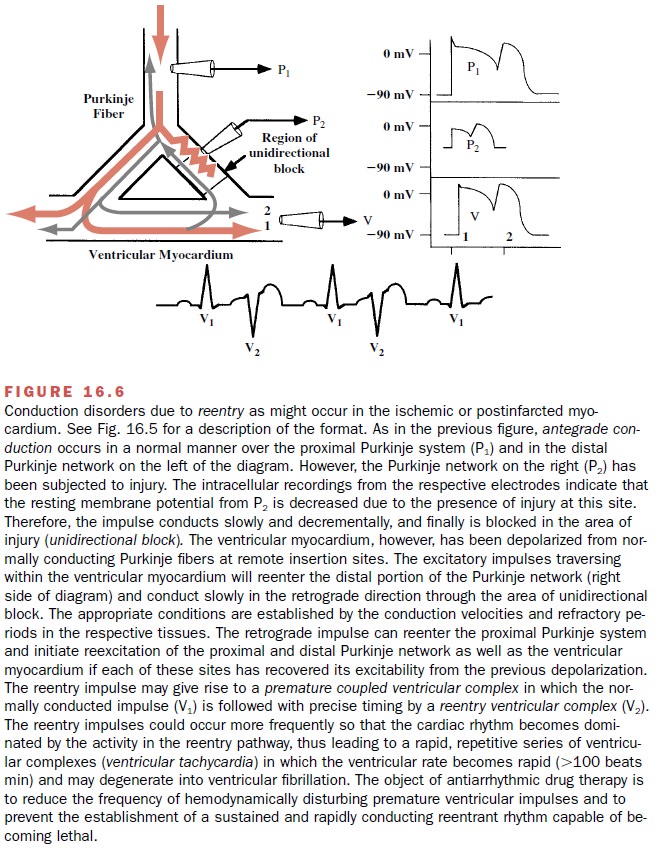 In the undamaged myocardium, cardiac impulses travel rapidly antegrade through the Purkinje fibers to deliver the excitatory electrical impulse to the ventricu-lar myocardium. During the normal activation se-quence, retrograde conduction from ventricular myo-cardium to the conducting fibers is prevented by the longer duration of the membrane action potential and thus the refractory period in the Purkinje fibers.

In the presence of myocardial ischemia, propaga-tion of cardiac impulses may be interfered with and a functional unidirectional block may occur. Impulses may fail to conduct longer in the anterograde direction to excite the more distal ventricular myocardium. Thus, the terminal segments of the Purkinje fibers within the affected region may be activated by impulses passing from the ventricular myocardium to conduct in a retro-grade direction (impulse 1, Fig. 16.6), albeit at a slower rate of conduction. In some situations, the retrograde impulse will enter an area of normal myocardium suffi-ciently repolarized that it is no longer refractory, and a propagated action potential will result. The generation of an action potential may produce an increased rate of ventricular activation and may become self-sustaining. The latter phenomenon is known as a reentrant, or cir-cus, rhythm. If propagation is too rapid through the re-gion of myocardial damage, the retrograde impulse will attempt to reenter the normal region while the tissue is refractory. This will give rise to bidirectional block, ter-minating the reentrant wave front. Therefore, for reen-try to occur, there must be a region of unidirectional block and slow conduction. The delay in conduction permits the tissue ahead of the advancing wave front to regain its excitability, sustaining the reentry circuit. As shown in Figure 16.6, the reentrant wave front gives rise to a second depolarizing impulse (2) in the ventric-ular myocardium and in each of the branches of the Purkinje network (P1 and P2). The net result of the reentrant wave is depicted in the electrocardiogram (ECG), in which coupled ventricular premature com-plexes (V2) follow each normal (V1) complex.

It is estimated that 80 to 90% of clinical arrhythmias have a reentry mechanism. One explanation of how an antiarrhythmic agent may abolish reentry is by convert-ing unidirectional block to bidirectional block. A sec-ond mechanism to explain the action of antiarrhythmic drugs is that they can prevent reentry by increasing the ERP of the cardiac fibers within or surrounding the re-gion of the reentrant circuit.