It is the cofactor for the carboxylation of glutamate residues in the postsynthetic modification of proteins to form the unusual amino acid γ-carboxyglutamate, abbreviated to Gla .

Although it has been known since the 1920s that vitamin K was required for blood clotting, it was not until the 1970s that its precise function was established. It is the cofactor for the carboxylation of glutamate residues in the postsynthetic modification of proteins to form the unusual amino acid γ-carboxyglutamate, abbreviated to Gla (Figure 8.7). 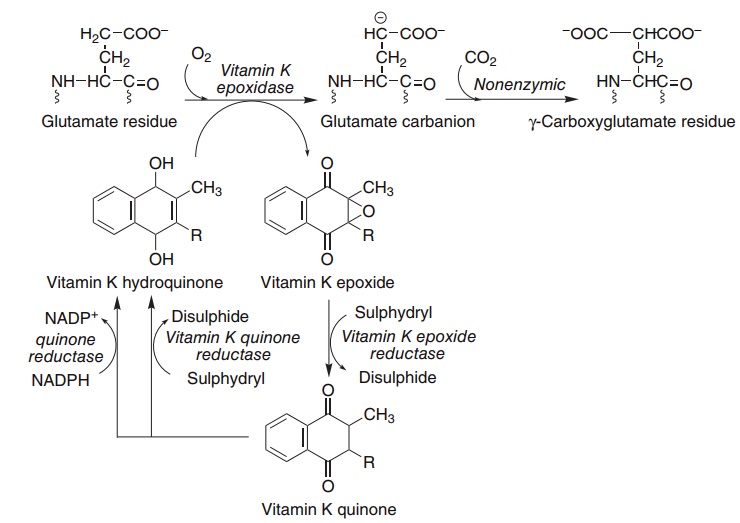 In the presence of warfarin, vitamin K epoxide cannot be reduced back to the active hydroquinone, but accumulates and is excreted as a variety of conju-gates. However, if enough vitamin K is provided in the diet, the quinone can be reduced to the active hydroquinone by the warfarin-insensitive enzyme, and carboxylation can continue, with stoichiometric utilization of vitamin K and excretion of the epoxide. High doses of vitamin K are used to treat patients who have received an overdose of warfarin, and at least part of the resistance of some populations of rats to the action of warfarin is due to a high consumption of vitamin K from maram grass, although there are also genetically resistant populations of rodents.

Prothrombin and several other proteins of the blood clotting system (factors VII, IX and X, and proteins C and S) each contain between four and six γ-carboxyglutamate residues per mole. γ-Carboxy glutamate chelates calcium ions, and so permits the binding of the blood clotting proteins to lipid mem-branes. In vitamin K deficiency, or in the presence of an antagonist such as warfarin, an abnormal precur-sor of prothrombin (preprothrombin) containing little or no γ-carboxyglutamate is released into the circulation. Preprothrombin cannot chelate calcium or bind to phospholipid membranes, and so is unable to initiate blood clotting. Preprothrombin is some-times known as PIVKA: the protein induced by vitamin K absence.