The metabolic role of folate is as a carrier of one-carbon fragments, both in catabolism and in biosyn-thetic reactions.

The metabolic role of folate is as a carrier of one-carbon fragments, both in catabolism and in biosyn-thetic reactions. These may be carried as formyl, formimino, methyl or methylene residues. The major sources of these one-carbon fragments and their major uses, as well as the interconversions of the sub-stituted folates, are shown in Figure 8.15.

The major point of entry for one-carbon fragments into substituted folates is methylene-tetrahydrofolate, which is formed by the catabolism of glycine, serine, 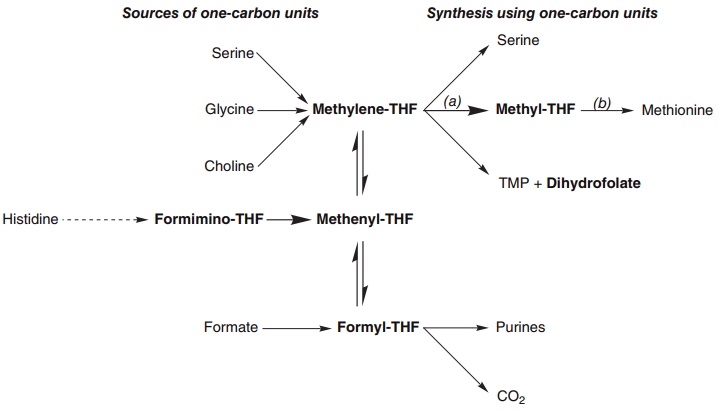 Figure 8.15 Interconversion of the principal one-carbon substituted folates; sources of one-carbon fragments are shown on the left, and pathways in which one-carbon units are used and free tetrahydrofolate is regenerated on the right. (a) Methylene-tetrahydrofolate reductase (EC 1.5.1.20); (b) methionine synthetase (EC 2.1.1.13).

and choline. Serine is the most important source of substituted folates for biosynthetic reactions, and the activity of serine hydroxymethyltransferase is regulated by the state of folate substitution and the availability of folate. The reaction is freely reversible, and under appropriate conditions in liver it functions to form serine from glycine as a substrate for gluconeogenesis.

The methylation of dUMP to thymidine monophos-phate (TMP), catalyzed by thymidylate synthetase, is essential for the synthesis of DNA, although pre-formed TMP arising from the catabolism of DNA can be reutilized.

Thymidylate synthase and dihydrofolate reductase are especially active in tissues with a high rate of cell division, and hence a high rate of DNA replication and a high requirement for thymidylate. Because of this, inhibitors of dihydrofolate reductase have been exploited as anticancer drugs (e.g. methotrexate). Chemotherapy consists of alternating periods of administration of methotrexate to inhibit tumor growth, and folate (normally as 5-formyl-tetrahydro-folate, leucovorin) to replete tissues and avoid folate deficiency; this is known as leucovorin rescue.

Methionine synthetase and the methyl-folate trap

In addition to its role in the synthesis of proteins, methionine, as the S-adenosyl derivative, acts as a methyl donor in a wide variety of biosynthetic reac-tions. As shown in Figure 8.16, the resultant homo-cysteine may be either metabolized to yield cysteine or remethylated to yield methionine.

Two enzymes catalyze the methylation of homo-cysteine to methionine:

●      Methionine synthetase is a vitamin B12-dependent enzyme, for which the methyl donor is methyl-tetrahydrofolate.

(an intermediate in the catabolism of choline) as the methyl donor, and is not vitamin B12 dependent.

Both enzymes are found in most tissues, but only the vitamin B12-dependent methionine synthetase is found in the central nervous system. 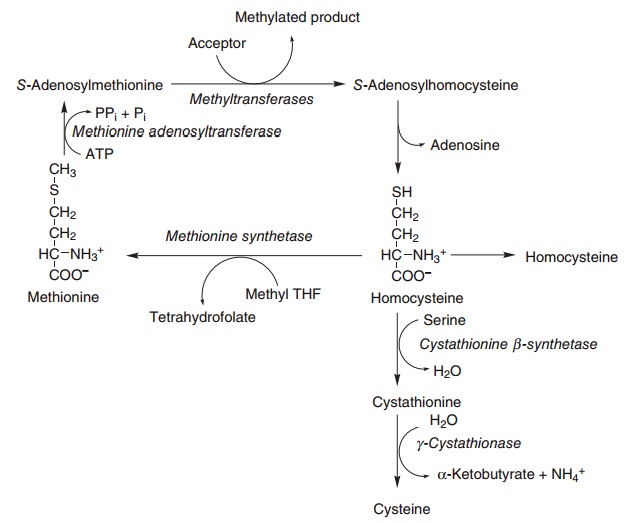 Methionine synthetase thus provides the link between the physiological functions of folate and vitamin B12. Impairment of methionine synthetase activity in vitamin B12deficiency will result in the accumulation of methyl-tetrahydrofolate, which can neither be uti-lized for any other one-carbon transfer reactions nor be demethylated to provide free folate.

This functional deficiency of folate is exacerbated by low tissue concentrations of methionine and an accumulation of homocysteine, since the transulfura-tion pathway to form cysteine from homocysteine is regulated by the availability of cysteine: it is a biosyn-thetic pathway rather than a pathway for disposal of methionine and homocysteine.

Elevated blood homocysteine is a significant risk factor for atherosclerosis, thrombosis, and hyperten-sion, independent of factors such as dietary lipids and plasma lipoproteins. About 10–15% of the popula-tion, and almost 30% of people with ischemic heart disease, have an abnormal variant of methylene-tetrahydrofolate reductase, which is unstable, and loses activity more quickly than normal. As a result, people with the abnormal form of the enzyme have an impaired ability to form methyl-tetrahydro-folate (the main form in which folate is taken up by tissues) and suffer from functional folate deficiency.

Therefore, they are unable to remethylate homocys-teine to methionine adequately and develop hyperhomocysteinemia.

This has led to the suggestion that supplements of folate will reduce the incidence of cardiovascular disease. However, a number of intervention trials with folate supplements have shown no reduction in death from myocardial infarction, nor any decrease in all-cause mortality, despite a significant decrease in plasma homocysteine. Similarly, in countries where there has been mandatory enrichment of flour with folate for some years, there is no evidence of reduced mortality from cardiovascular disease. It is possible that elevated plasma homocysteine is not so much a cause of atherosclerosis (although there are good mechanisms to explain why it might be atherogenic) as the result of impaired kidney function due to early atherosclerosis. If this is so, the lowering of plasma homocysteine by increasing folate intake would not be expected to affect the development of atherosclerosis.

During the 1980s a considerable body of evidence accumulated that spina bifida and other neural tube defects (which occur in about 0.75–1% of pregnan-cies) were associated with low intakes of folate, and that increased intake during pregnancy might be pro-tective. It is now established that supplements of folate begun periconceptually result in a significant reduction in the incidence of neural tube defects, and it is recommended that intakes be increased by 400 μg/day before conception. (Closure of the neural tube occurs by day 28 of pregnancy, which is before the woman knows she is pregnant.) The studies were conducted using folate monoglutamate and it is unlikely that an equivalent increase in intake could be achieved from unfortified foods. In many countries there is mandatory enrichment of flour with folate, and there has been a 25–50% decrease in the number of infants born with neural tube defects since the introduction of fortification. The true benefit is greater than this, since some affected fetuses abort spontaneously and there are few data on the number of therapeutic terminations of pregnancy for neural tube defects detected by antenatal screening; there-fore, supplements are recommended. Where folate enrichment is not mandatory, the advice is that all women who are, or may be about to become, preg-nant, should take supplements of 400 μg/day.

Much of the regulation and silencing of gene expres-sion that underlies tissue differentiation involves methylation of CpG islands in DNA, and there is evidence that some cancers (and especially colorectal cancer) are associated with under-methylation of CpG islands as a result of low folate status. A number of small studies have suggested that folate supple-ments may be protective against colorectal cancer, but no results from large-scale randomized controlled trials have yet been reported, and to date there is no evidence of a decrease in colorectal cancer in coun-tries where folate enrichment of flour is mandatory.