Hormones circulate in the blood but their concentration can increase or decrease based on the requirement of the body.

Hormones circulate in the blood but their concentration can increase or decrease based on the requirement of the body. This is controlled by feedback mechanisms.

Hormones are classified into three major groups as peptide hormones, steroid hormones and amino acid derived hormones based on their chemical structure.

·                 Peptide hormones cannot cross the phospolipid cell membrane and bind to the receptors on the exterior cell surface. They are are transported to the golgi, which is the site of modification. It acts as a first messenger in the cell. Hormones on binding to their receptors do not enter the target cell but generate the production of second messengers such as cyclic AMP (c AMP), which in turn regulates cellular metabolism. This is catalyzed by the enzyme adenylate cyclase. The interaction between the hormone at the surface and the effect brought out by cAMP within the cell is known as signaling cascade. At each step there is a possibility of amplification. (Figure 11.17) 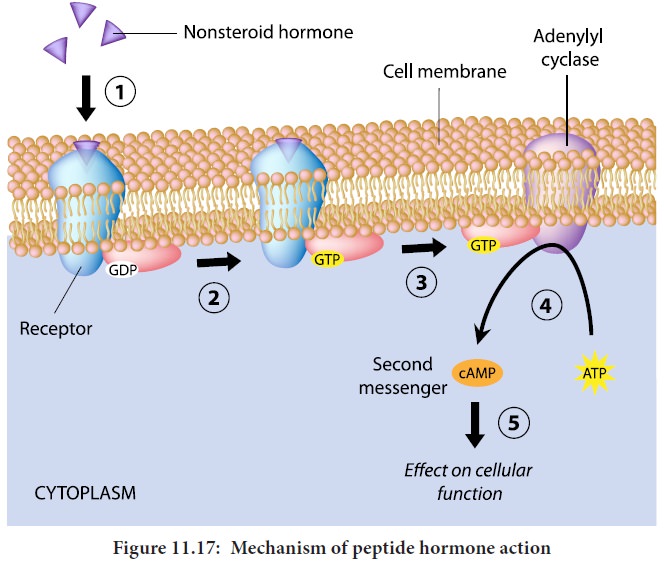 1.One hormone molecule may bind to multiple receptor molecules before it is degraded.

2.Each receptor may activate several adenylate cyclases each of which make much c AMP.

3.Thus there is more signal after each step.

The actions of cAMP are terminated by phosphodiesterases. The effect of peptide hormones like insulin, glucagon, somatotropin are usually short lived because they work through second messenger system.

·       Steroid hormones can easily cross the cell membrane, and bind to their receptors, which are intracellular or intranuclear. Upon binding to the receptors, they pair up with another receptor – hormone complex (dimerize).This dimer can then bind to DNA and alter its transcription. (Figure 11.18) 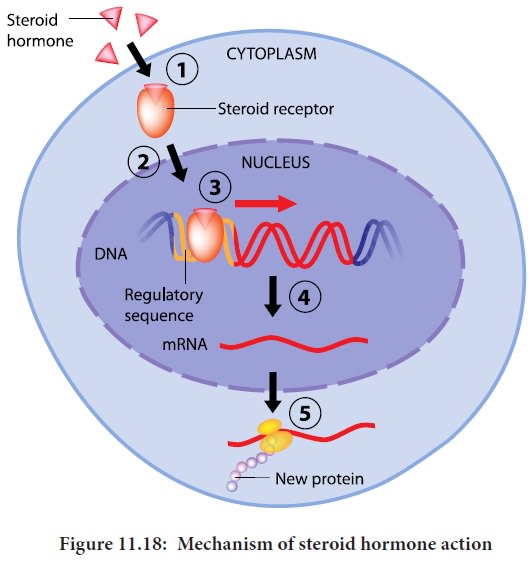 ·       The effect of steroid hormones such as aldosterone, oestrogen, FSH are long lived, as they alter the amount of mRNA and protein in a cell.

·       Amino acid derived hormones are derived from one or two aminoacid with a few additional modifications. Thyroid hormone is synthesised from tyrosine and includes the addition of several iodine atoms. Epinephrine an amino acid derivative may function through second messenger system like peptide hormones or they may actually enter the cell and function like steroid hormones.