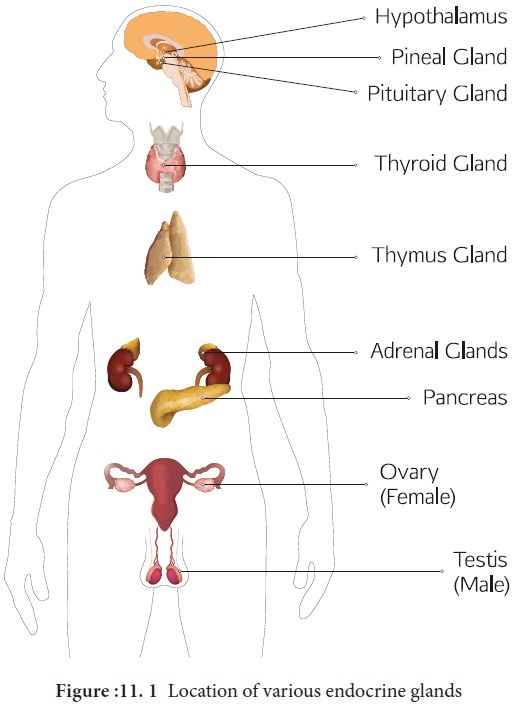 Hypothalamus is a small cone shaped structure that projects downward from the brain ending into the pituitary stalk. It interlinks both the nervous system and endocrine system. Though pituitary gland is known as master endocrine glands that controls the other endocrineglands that controls the other endocrine glands, but it is, in turn controlled by the hypothalamus. Hypothalamus contains groups of neurosecretory cells.It produces neurotransmitters which regulate the secretions of the pituitary (Figure11. 2). The hormones produced by the hypothalamus act either as a releasing hormone or as an inhibitory hormone. 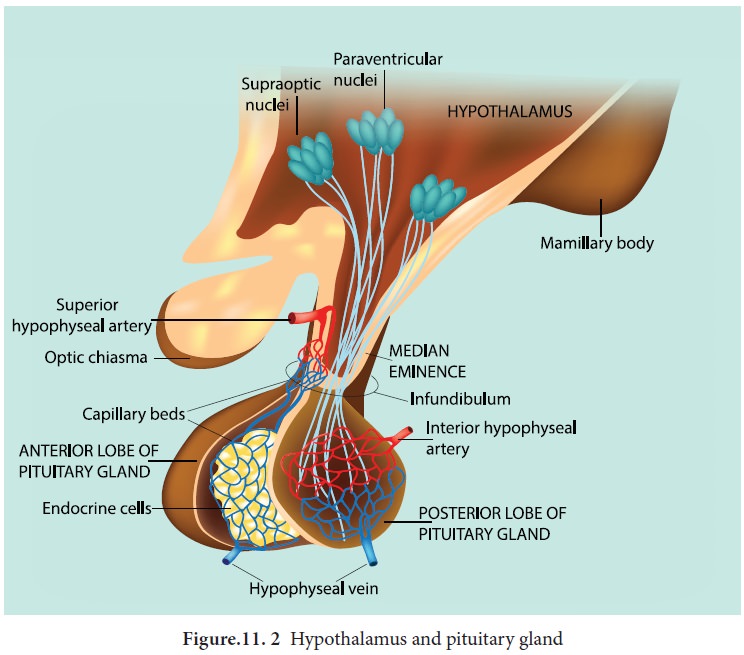 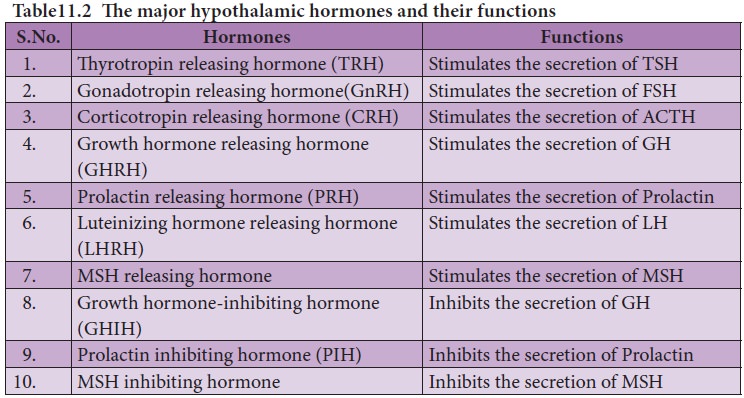 The pituitary gland (means to grow under) is ovoid in shape and is located in the sella turcica, a bony cavity of the sphenoid bone at the base of brain and connected to the hypothalamic region of the brain by a stalk called infundibulum. It is about one centimetre in diameter and 0.5 gm in weight. The pituitary consists of two lobes, anterior glandular adenohypophysis and posterior neural neurohypophysis. The anterior lobe originates from the embryonic invagination of pharyngeal epithelium called Rathke’s pouch and the posterior lobe is originates from the base of the brain as an outgrowth of hypothalamus. Anatomically the adenohypophysis has three lobes or zones namely pars intermedia, pars distalis and pars tuberalis. The neurohypophysis is otherwise known as pars nervosa.

(i)             Growth hormone (GH): It is also known as somatotropic hormone (STH) or Somatotropin. It is a peptide hormone. Growth hormone promotes growth of all the tissues and metabolic process of the body. It influences the metabolism of carbohydrates, proteins and lipids and increases the rate of protein biosynthesis in the cells. It stimulates chondrogenesis (cartilage formation), osteogenesis (bone formation) and helps in the retention of minerals like nitrogen, potassium, phosphorus, sodium etc., in the body. GH increases the release of fatty acid from adipose tissue and decreases the rate of glucose utilization for energy by the cells. Thus it conserves glucose for glucose dependent tissues, such as the brain.

It’s release from the anterior pituitary is induced by the thyrotropin releasing hormone (TRH). When thyroxine level in the blood increases, TRH acts on both the pituitary and hypothalamus to inhibit TSH secretion.

(iv) Follicle stimulating hormone (FSH): FSH is a glycoprotein hormone which regulates the functions of the gonads (ovary and testis). In males, FSH along with androgens acts on the germinal epithelium of seminiferous tubules and stimulates the production and release of sperms (spermatogenesis). In females, FSH acts on the ovaries and brings about the development and maturation of graffian follicles.

(v) Luteinizing hormone (LH): LH is a glycoprotein hormone which is also known as interstitial cell stimulating hormone (ICSH). In males, ICSH acts on the interstitial cells of testis to produce the male sex hormone, testosterone. In females, LH along with FSH matures the ovarian follicles. LH independently induces ovulation, maintains the corpus luteum and promotes synthesis and release of ovarian hormones. FSH and LH are collectively referred as gonadotropins. FSH and LH are not produced during childhood. The secretion of FSH and LH starts only during pre pubertal period.

(vi) Luteotropic hormone (LTH): LTH is also called luteotropin or lactogenic hormone or prolactin or mammotropin. It is a protein hormone which stimulates milk secretion after the child birth in females. High prolactin secretion during lactation suppresses LH secretion and ovulation since it induces the corpus luteum hence named as luteo tropic hormone.

i. Vasopressin or antidiuretic hormone (ADH) : ADH is a peptide hormone which promotes reabsorption of water and electrolytes by distal tubules of nephron and thereby reduces loss of water through urine. Hence it is called as anti diuretic hormone. It also causes constriction of blood vessels when released in large amount and increases blood pressure. ADH deficiency causes Diabetes insipidus which induces the production of large amount of urine.

ii. Oxytocin (means quick birth): It is a peptide hormone which stimulates vigorous contraction of the smooth muscles of uterus during child birth and ejection of milk from the mammary glands.

In human, the pineal gland or epiphysis cerebri or conarium is located behind the third ventricle of brain and is formed of parenchymal cells and interstitial cells. It secretes the hormone, melatonin, which plays a central role in the regulation of circadian rhythm of our body and maintains the normal sleep wake cycle. It also regulates the timing of sexual maturation of gonads. In addition melatonin also influences metabolism, pigmentation, menstrual cycle and defence mechanism of our body.

the butterfly shaped thyroid gland is a bilobed gland located below the larynx on each side of upper trachea. It is the largest endocrine gland in the body. Its two lateral lobes are connected by a median tissue mass called isthmus. Each lobe is made up of many lobules .The lobules consist of follicles called acini (acinus in singular). Each acinus is lined with glandular, cuboidal or squamous epithelial cells. The lumen of acinus is filled with colloid, a thick glycoprotein mixture consisting of thyroglobulin molecules. 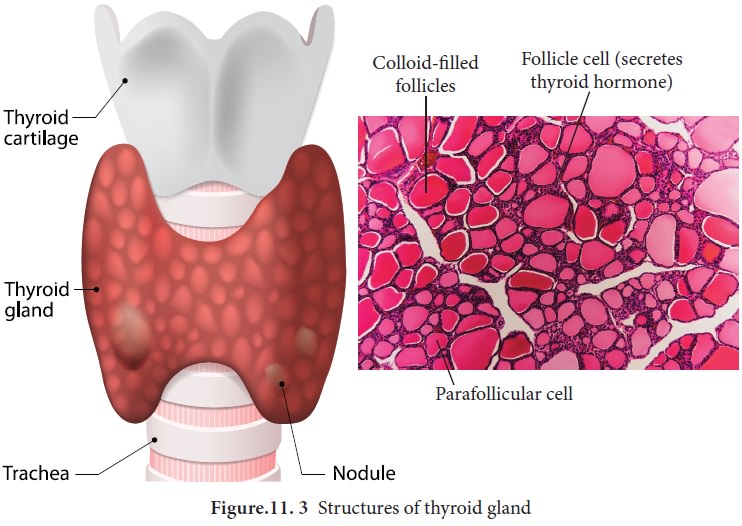 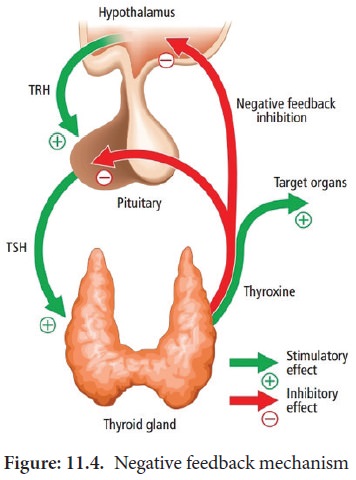 Functions of thyroxine or tetra-iodothyronine (T4): Thyroxine regulates the basal metabolic rate (BMR) and body heat production. It stimulates protein synthesis and promotes growth. It is essential for the development of skeletal and nervous system. Thyroxine plays an important role in maintaining blood pressure. It reduces serum cholesterol levels, Optimum levels of thyroxine in blood is necessary for gonadial functions.

PTH is a hypercalcemic hormone. It is a peptide hormone involved in controlling the calcium and phosphate homeostasis. The secretion of PTH is controlled by calcium level in the blood. It increases the blood calcium level by stimulating osteoclasts to dissolve the bone matrix. As a result calcium and phosphate are released into the blood. PTH enhances the reabsorption of calcium and excretion of phosphates by the renal tubules and promotes activation of vitamin D to increase calcium absorption by intestinal mucosal cells.

Thymus gland is partially an endocrine and partially a lymphoid organ. It is a bilobed structure located just above the heart and aorta, behind the sternum. It is covered by fibrous capsule and anatomically it is divisible into an outer cortex and an inner medulla. 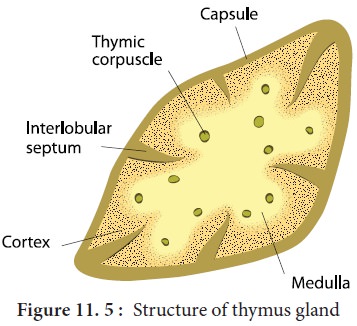 It secretes four hormones such as thymulin, thymosin, thymopoietin and thymic humoral factor (THF). The primary function of thymus is the production of immuno competent ‘T’ lymphocytes which provides cell mediated immunity. 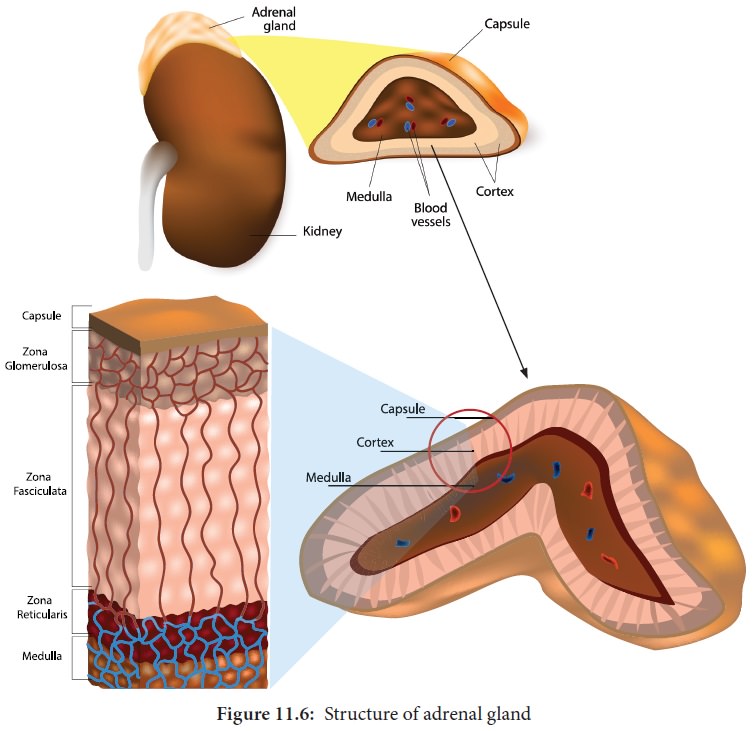 Function of adrenal hormones: Glucocorticoids stimulate gluconeogensis, lipolysis and proteolysis (the life saving activity). Cortisol is a glucocorticoid involved in maintaining cardio vascular and kidney functions. It produces anti-inflammatory reactions and suppresses the immune response. It stimulates the RBC production. It is also known as stress combat hormone. Mineralocorticoids regulates water and electrolyte balance of our body. Aldosterone stimulates the reabsorption of sodium and water and eliminates potassium and phosphate ions through excretion, thus it helps in maintaining electrolytes, osmotic pressure and blood pressure. Adrenal androgen plays a role in hair growth in the axial region, pubis and face during puberty.

The adrenal medulla secretes the hormones adrenalin and noradrenalin and are referred as "3F hormone" (fight, flight and fright hormone). Adrenalin increases liver glycogen breakdown into glucose and increases the release of fatty acids from fat cells. During emergency it increases heart beat rate and blood pressure. It stimulates the smooth muscles of cutaneous and visceral arteries to decrease blood flow. It increases blood flow to the skeletal muscles thereby increases the metabolic rate of skeletal muscles, cardiac muscles and nervous tissue. 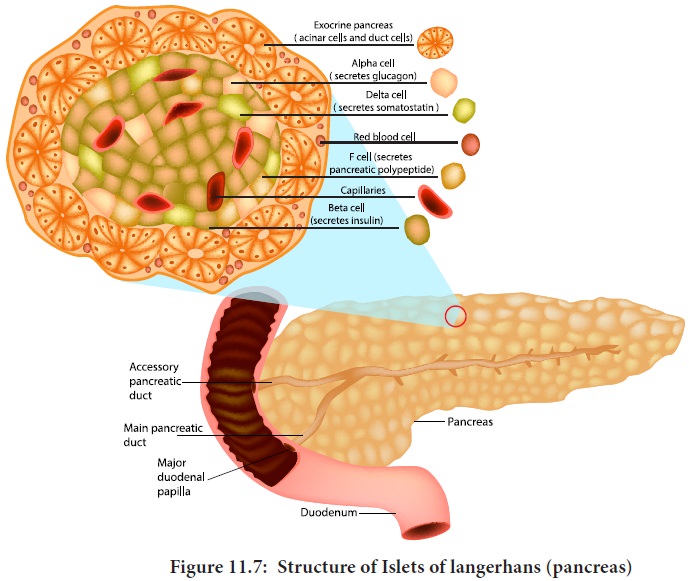 Insulin: Insulin is a peptide hormone and plays an important role in glucose homeostasis. It’s main effect is to lower blood glucose levels by increasing the uptake of glucose into the body cells, especially muscle and fat cells. Insulin also inhibits the breakdown of glycogen to glucose, the conversion of amino acids or fats to glucose, so insulin is rightly called a hypoglycemic hormone.

Glucagon: Glucagon is a polypeptide hormone. It is a potent hyperglycaemic hormone that acts on the liver and promotes the breakdown of glycogen to glucose (Glygogenolysis), synthesis of glucose from lactic acid and from non-carbohydrate molecules (Gluconeogenesis) . Glucagon releases glucose from the liver cells, increasing the blood glucose levels. Since glucagon reduces the cellular uptake and utilisation of glucose it is called a hyperglycemic hormone. Prolonged hyperglycemia leads to the disorder called diabetes mellitus.

Testis: A pair of testis is present in the scrotal sac of males. The testis functions as a sex organ and also as an endocrine gland. The testis is composed of seminiferous tubules and interstitial cells or Leydig cells. The Leydig cells secrete several male sex hormones, collectively called androgens, mainly testosterone.

Functions of testosterone: Under the influence of FSH and LH, testosterone initiates maturation of male reproductive organs, and the appearance of secondary sexual characters, muscular growth, growth of facial and axillary hair, masculine voice and male sexual behaviour. It enhances the total bone matrix and plays a stimulating role in the process of spermatogenesis.

Ovary: Females have a pair of ovaries located in the pelvic region of the abdomen.

The ovary is composed of ovarian follicles and stromal tissues. It produces the eggs or ova. The ovaries secrete the steroid hormones oestrogen and progesterone. Oestrogen is responsible for the maturation of reproductive organs and the development of secondary sexual characters at puberty. Along with progesterone, oestrogens promotes breast development and initiate the cyclic changes during menstrual cycle. Progesterone prepares the uterus for implantation of the fertilized ovum. It decreases the uterine contraction during pregnancy and stimulates the development of mammary glands and milk secretion. It is responsible for premenstrual changes in the uterus and is essential for the formation of placenta.

Some tissues of the heart, kidney and gastro intestinal tract acts as partial endocrine glands. In the heart, cardiocytes on the atrial wall's secretes an important peptide hormone called atrial natriuretic factor (ANF). When blood pressure is increased, ANF is secreted and causes dilation of the blood vessels to reduce the blood pressure.

In kidneys, hormones such as renin, erythropoietin and calcitriol are secreted.

Renin is secreted by juxta glomerular cells (JGA), which increases blood pressure when angiotensin is formed in blood. Erythropoietin is also secreted by the JGA cells of the kidney and stimulates erythropoiesis (formation of RBC) in bone marrow. Calcitriol is sercreted by proximal tubules of nephron. It is an active form of vitamin D3 which promotes calcium and phosphorus absorption from intestine and accelerates bone formation.

Group of specialized endocrine cells present in gastro-intestinal tract secretes hormones such as gastrin, cholecystokinin (CCK), secretin and gastric inhibitory peptides (GIP). Gastrin acts on the gastric glands and stimulates the secretion of HCl and pepsinogen. Cholecystokinin (CCK) is secreted by duodenum in response to the presence of fat and acid in the diet. It acts on the gall bladder to release bile into duodenum and stimulates the secretion of pancreatic enzymes and its discharge. Secretin acts on acini cells of pancreas to secrete bicarbonate ions and water to neutralize the acidity. Gastric inhibitory peptide (GIP) inhibits gastric secretion and motility. 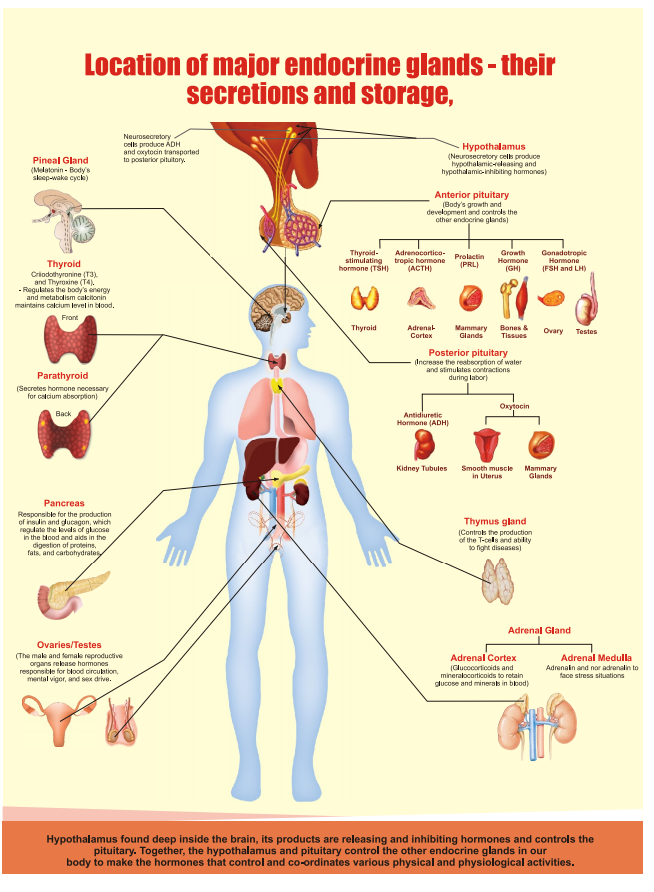