Spreadsheet is a very useful office automation tool to organise, analyse and store data in a tabular form.

Spreadsheet is a very useful office automation tool to organise, analyse and store data in a tabular form. Spreadsheet was developed as computerized equivalent to paper-based accounting worksheets.

Spreadsheet users can adjust any of the stored values and can observe the effects on the calculated values. This is called "What if " analysis. Modern spreadsheet can have multiple interacting sheets and can display data either as text or numerals or in a graphical form.

Daniel Bricklin and Bob Frankston developed the first spreadsheet called “VisiCalc” in 1979 for Apple II. In 1982, Lotus Corporation introduced “Lotus 1-2-3”; Lotus 1-2-3 was the first to introduce cell names and macros. In 1987, Microsoft Corporation introduced Excel. Excel implemented a Graphical User Interface (GUI) and the ability to point and click using a mouse. There are lots of other spreadsheet applications; Microsoft Excel continues to be the most popular spreadsheet software. 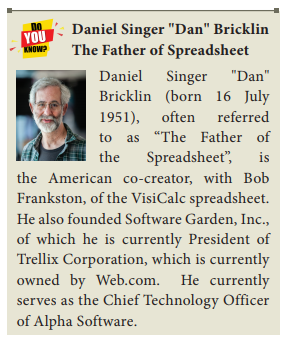