Compression members are the most common structural elements and it is

termed as columns, struts, posts or stanchions. They are designed to resist axial           compression.

Failure of the cross-section due to crushing or yielding

Failure by buckling, due to elastic instability

Mixed mode of failure due to crushing and buckling

radius of gyration r of the column section.

4.       Classify the columns according to the slenderness ratios.

slabs etc, generally they are used in ordinary buildings.

Struts are commonly used for compression members in a roof truss; it may either be in vertical position or in an inclined position.

These are the steel columns made of steel sections, commonly used in buildings. 7. What is Post?

It is loosely used for a column, but in truss bridge girders, end compression members are called end posts.

It is the principal compression member in a crane.

The axis of the column is perfectly straight when unloaded.

The line of thrust coincides exactly with the unstrained axis of the strut.

The flexural rigidity EI is uniform

The material is isotropic

10.     Why the lateral systems are provided in compound columns?

If the plates are not connected throughout their length of the Built up sections,

lateral systems may be provided, which act as a composite section. In such cases the

load carrying elements  of the built-up compression  member in the relative position,

without sharing any axial load. However when the column deflects, the lateral system

11.     Name the lateral systems that are used in compound columns and which is the mostly used one?

Lacing or latticing is the most common used lateral system and the sections are flats,           angles and channels.

12.     What will be the thickness for the single and double lacing bars?

length between  the inner end rivets  or welds  for single lacing,  and one-sixtieth  of

the length for double lacing.

13.     What is the purpose of providing battens in compound steel columns?

Batten plates consist of flats or plates, connecting the components of the built-up columns in two parallel planes. These are used only for axial loading. Battening of the composite column should not be done if it is subjected to eccentric loading or a applied moment in the plane of battens.

14. What is the thickness of a batten plate?

The thickness of batten plate shall not be less than one fiftieth of the distance between the inner most connecting lines of rivets or welds. This requirement eliminates lateral buckling of the batten.

15. Where the perforated cover plates are used and mention its advantages?

They are mostly used in the box sections, which consist of four angle sections so that the interior of column remains accessible for painting and inspection. Advantages:

They add to the sectional area of column and the portions beyond the perforation share axial load to the extent of their effective area.

There is economy and fabrication and maintenance

Perforations conveniently allow the riveting and painting work on the inside portion.

16. Name the types of column base?

17. State the purpose of column base?

The base of the column is designed in such a way to distribute the concentrated column load over a definite area and to ensure connection of the lower column end to the foundation. It should be in adequate strength, stiffness and area to spread the load upon the concrete or other foundations without exceeding the allowable stress.

18. Give the difference between slab base and gusseted base for steel columns.

Slab base is a thick steel base plate placed over the concrete base and connected to it through anchor bolts. The steel base plate may either be shop-welded to the stanchion,else can be connected at the site to the column through cleat angles. The column is faced for bearing over the whole area.

19. What is slab base and for what purpose is it provided?

The base plate connected to the bottom of the column to transfer over wider area is known as slab base. Column end is machined to transfer the load by direct bearing. No gusset materials are required.

20. When the slenderness ratio of compression member increases, the permissible stress decreases. Why?

The section must be so proportioned that it has largest possible moment of inertia for the same cross-sectional area. Also the section has approximately the same radius of gyration about both the principal axes. 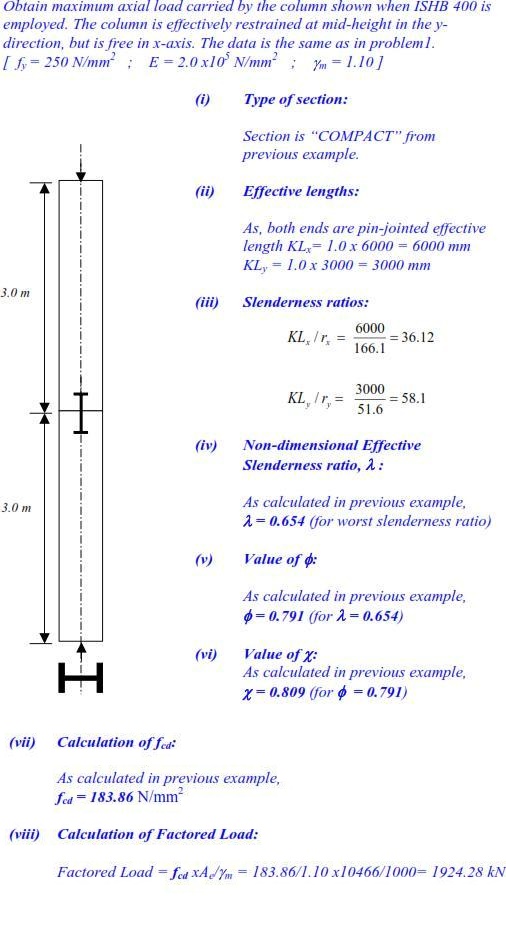 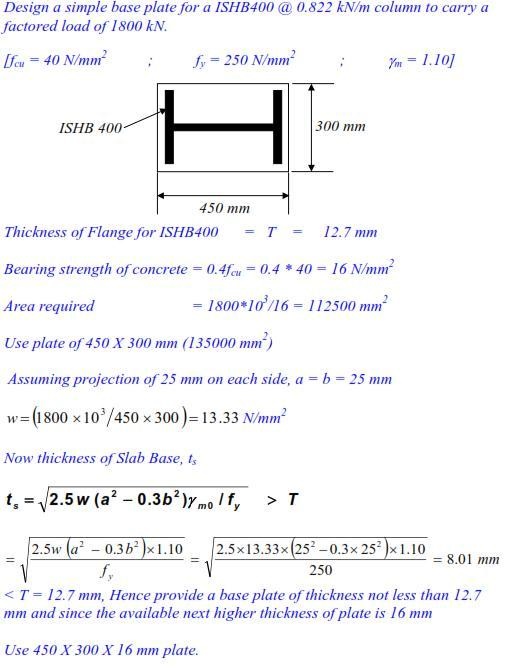