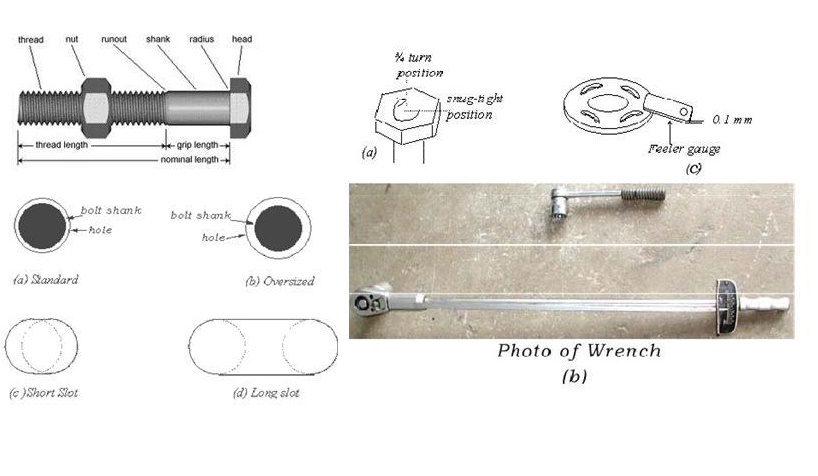 Bolt is a metal pin with a head at one end and a shank threaded at other end to receive a nut, as shown in Figure 6. Steel washers are usually provided under the bolt head and nuts to prevent the treaded portion of the bolt from bearing on the connecting pieces and to distribute the clamping pressure on the bolted member. 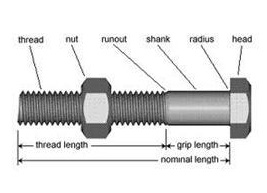 A bolt connection can be used for end connections in tension and compression members. They can also hold down column bases in position and as separator for purlins and beams in foundations. Bolts are having the following advantages over rivets and pins: (a) the erection of the structures can be speeded up. (b) Less skilled labour can be employed. (c) Overall cost of bolted connection is lesser than the other alternatives. However the following shortcomings are also associated with the bolted connections: (a) Cost of material is high, about double than that of rivets. (b) The tensile strength of bolt is reduced due to the reduced area at the root of the thread and stress concentration. (c) Normally strength reduction will be there for loose fit bolts. (d) Bolts may get loose when subjected to vibrations.

Bolts used in steel structures are of three types:

2) Turned and Fitted Bolts and

The International Standards Organisation designation for bolts, also followed in India, is given by Grade x.y. In this nomenclature, x indicates one-tenth of the minimum ultimate tensile strength of the bolt in kgf/mm2 and the second number, y, indicates one-tenth of the ratio of the yield stress to ultimate stress, expressed as a percentage. Thus, for example, grade 4.6 bolt will have a minimum ultimate strength 40 kgf/mm2 (392 MPa) and minimum yield strength of 0.6 times 40, which is 24 kgf/mm2 (235 MPa).

Black bolts are unfinished and are made of mild steel and are usually of Grade 4.6. Black bolts have adequate strength and ductility when used properly; but while tightening the nut snug tight ('Snug tight' is defined as the tightness that exists when all plies in a joint are in firm contact) will twist off

easily if tightened too much.

Turned and fitted bolts have uniform shanks and are inserted in close tolerance drilled holes and made snug tight by box spanners. The diameter of the hole is about 1.5 to 2.0 mm larger than the bolt diameter for ease in fitting. High strength black bolts (grade 8.8) may also be used in connections in which the bolts are tightened snug fit. In these bearing type of connections, the plates are in firm contact but may slip under loading until the hole surface bears against the bolt .The load transmitted from plate to bolt is therefore by bearing and the bolt is in shear. Under dynamic loads, the nuts are liable to become loose and so these bolts are not allowed for use under such loading. In situations where small slips can cause significant effects as in beam splices, black bolts are not preferred. However, due to the lower cost of the bolt and its installation, black bolts are quite popular in simple structures subjected to static loading. Turned and fitted bolts are available from grade 4.6 to grade 8.8. For the higher grades there is no definite yield point and so 0.2% proof stress is used. 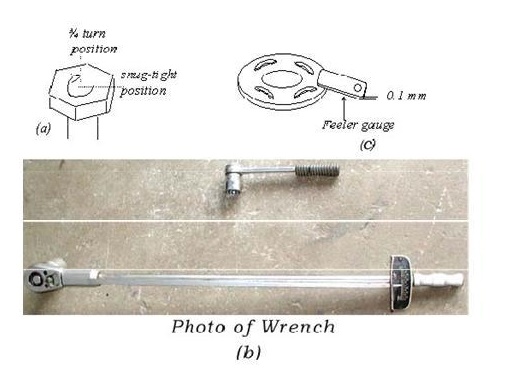 High Strength Friction Grip bolts (HSFG) provide extremely efficient connections and perform well under fluctuating/fatigue load conditions. These bolts should be tightened to their proof loads and require hardened washers to distribute the load under the bolt heads. The washers are usually tapered when used on rolled steel sections. The tension in the bolt ensures that no slip takes place under working conditions and so the load transmission from plate to the bolt is through friction and not by bearing. However, under ultimate load, the friction may be overcome leading to a slip and so bearing will govern the design. HSFG bolts are made from quenched and tempered alloy steels with grades from 8.8 to 10.9. The most common are the so-called, general grade of 8.8 and have medium carbon content, which makes them less ductile. The 10.9 grade have a much higher tensile strength, but lower ductility and the margin between the 0.2% yield strength and the ultimate strength is also lower. The tightening of HSFG bolts can be done by either of the following methods (IS 4000):

• Turn-of-nut tightening method: In this method the bolts are first made snug tight and then turned by specific amounts (usually either half or three-fourth turns) to induce tension equal to the proof load (Figure 7(a)).

•        Calibrated wrench tightening method: In this method the bolts are tightened by a wrench

(Figure 7(b)) calibrated to produce the required tension.

•  Alternate design bolt installation: In this method special bolts are used which indicate the bolt

tension. Presently such bolts are not available in India.

• Direct tension indicator method: In this method special washers with protrusions are used (Figure 7(c)). As the bolt is tightened, these protrusions are compressed and the gap produced by them gets reduced in proportion to the load. This gap is measured by means of a feeler gauge, consisting of small bits of steel plates of varying thickness, which can be inserted into the gap.

Since HSFG bolts under working loads, do not rely on resistance from bearing, holes larger than usual can be provided to ease erection and take care of lack-of-fit. Typical hole types that can be used are standard, extra large and short or long slotted. These are shown in Figure 8. However the type of hole will govern the strength of the connection. Holes must also satisfy pitch and edge/end distance criteria (Cl.10.2 of IS 800:2007). A minimum pitch is usually specified for accommodating the spanner and to limit adverse interaction between the bearing stresses on neighbouring bolts. A maximum pitch criterion takes care of buckling of the plies under compressive loads. 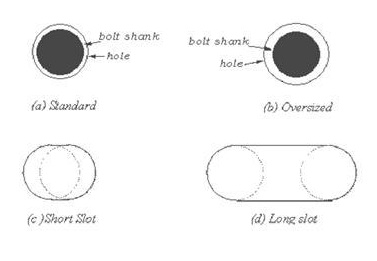