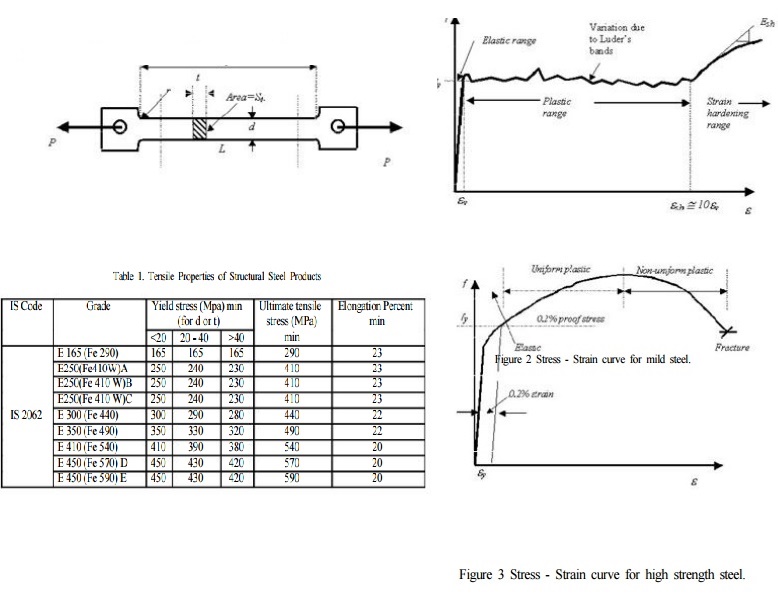 The principal mechanical properties of the structural steel important in design, as detailed by the code IS 800:2007 in cl. 2.2.4.2, are the yield stress, f y; the tensile or ultimate stress, fu; the maximum percent elongation on a standard gauge length and notch toughness. Except for notch toughness, the other properties are determined by conducting tensile tests on samples cut from the plates, sections, etc, in accordance with IS 1608. Commonly used properties for the common steel products of different specifications are summarized in Table 1 of IS 800:2007. Highlights of the table are reproduced for ready reference as Table 1.

given in Figure 1. The details of the specimen and the method of testing is elaborated in IS: 1608

(1995). The important parameters are the gauge length 'Lc' and the initial cross section area So. The loads are applied through the threaded or shouldered ends. The initial gauge length is taken as 5.65?So in the case of rectangular specimen and it is five times the diameter in the case of circular specimen. A typical stress-strain curve of the tensile test coupon is shown in Figure 2 in which a sharp change in yield point followed by plastic strain is observed. After a certain amount of the plastic deformation of the material, due to reorientation of the crystal structure an increase in load is observed with increase in strain. This range is called the strain hardening range. After a little increase in load, the specimen eventually fractures. After the failure it is seen that the fractured surface of the two pieces form a cup

and cone arrangement. This cup and cone fracture is considered to be an indication of ductile fracture.

It is seen from Figure 2 that the elastic strain is up to ?y followed by a yield plateau between strains ?y and ?sh and a strain hardening range start at ?sh and the specimen fail at ?ult where ?y, ?sh and ?ult are the

strains at onset of yielding, strain hardening and failure respectively.

Depending on the steel used, ?sh generally varies between 5 and 15 ?y, with an average value of 10

?y typically used in many applications. For all structural steels, the modulus of elasticity can be taken as 205,000 MPa and the tangent modus at the onset of strain hardening is roughly 1/30th of that value or approximately 6700 MPa. High strength steels, due to their specific microstructure, do not show a sharp yield point but rather they yield continuously as shown in Figure 2. For such steels the yield stress is always taken as the stress at which a line at 0.2% strain, parallel to the elastic portion, intercepts the stress strain curve. 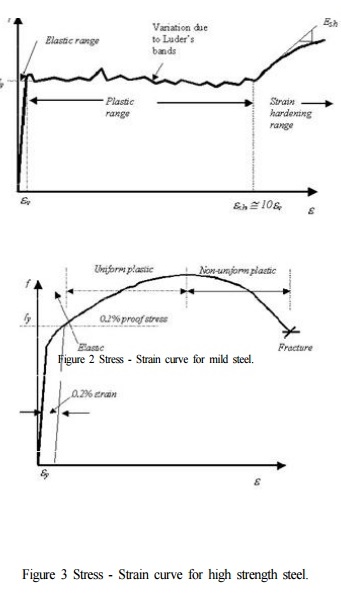 Hardness is regarded as the resistance of a material to indentations and scratching. This is generally determined by forcing an indentor on to the surface. The resultant deformation in steel is both elastic and plastic. There are several methods using which the hardness of a metal could be found out. They basically differ in the form of the indentor, which is used on to the surface. Brinell hardness usually uses steel balls where as Vickers hardness uses square based diamond pyramid with 1350 and Rockwell hardness uses diamond cone with 1200 angle. In all the above cases, hardness number is related to the ratio of the applied load to the surface area of the indentation formed. The testing procedure involves forcing the indentor on to the surface at a particular road. On removal, the size of indentation is measured.

There is always a possibility of microscopic cracks in a material or the material may develop such cracks as a result of several cycles of loading. Such cracks may grow rapidly without detection and lead to sudden collapse of the structure. To ensure that this does not happen, materials in which the cracks grow slowly are preferred. Such steels are known as notch-tough steels and the amount of energy they absorb is measured by impacting a notched specimen with a heavy pendulum as in Izod or Charpy tests.