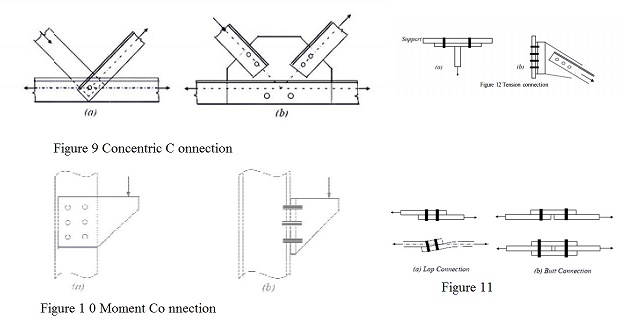 Bolt is a metal pin with a head at one end and a shank threaded at other end to receive a nut, as shown in Figure.

Bolt is a metal pin with a head at one end and a shank threaded at other end to receive a nut, as shown in Figure 6. Steel washers are usually provided under the bolt head and nuts to prevent the treaded portion of the bolt from bearing on the connecting pieces and to distribute the clamping pressure on the bolted member.

A bolt connection can be used for end connections in tension and compression members. They can also hold down column bases in position and as separator for purlins and beams in foundations. Bolts are having the following advantages over rivets and pins: (a) the erection of the structures can be speeded up. (b) Less skilled labour can be employed. (c) Overall cost of bolted connection is lesser than the other alternatives. However the following shortcomings are also associated with the bolted connections: (a) Cost of material is high, about double than that of rivets. (b) The tensile strength of bolt is reduced due to the reduced area at the root of the thread and stress concentration. (c) Normally strength reduction will be there for loose fit bolts. (d) Bolts may get loose when subjected to vibrations.

Bolt connections are generally classified in the following ways

1. Based on the resultant force transferred.

(c) Moment resisting connection - when the joints are subjected to moments. Eg. Beam to column connection in framed construction. 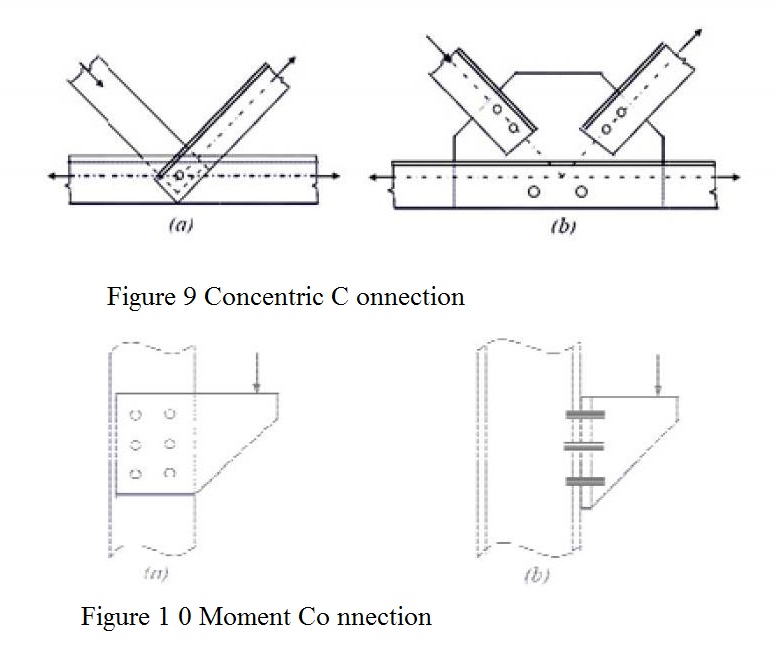 2. B ased on the type of force

Bolt connections can be classified in to the following based on        the type of  force transferred:

(c) Combined shears and tension connections      - when load is transferred through    the combinations of shear and tension. Eg. Inclined members connected to columns or beams.

Typical shear       connections occur as a lap or a butt joint used in the tension members as shown in Figure 11. While the lap joint has a tendency to bend sothat the forces tend to become collinear, the butt joint requires cover plates. Since the load acts in the plane of the plates, the   load transmission at the joint  will ultimately be through shearing   forces in the          bolts.

In      the case of   lap joint or  a single cover plate butt joint, there is only one shearing plane, and so the bolts are said to      be in single  shear. In the case of double cover     butt joint, there are two       shearing planes and so the bolts will be in double shear. It should   be noted that the single    cover type   butt joint is nothing but lap joints in series          and also bends so that the centre of  the cover plate becomes collinear with the forces. In the of single    cover plate (lap) joint, the thickness of the cover plate is chosen to be equal to or greater than the connected plates. While in       double cover plate (butt)         joint, the combined thickness of the cover plates should be equal       to or greater than the connected plates.

this connection, load transmission is by pure 12(b), the bolts are subjected to both tension

3. On the basisof force transfer mechanism

Bolt connections are classified into the following   based on the way in which load is transferred from one member to  another connected in the joint.

(a) Bearing type- bolts bears against the    holes to transfer the load from one member to another. Eg. Slip type connection.

(b) Friction type - when the force is transferred by friction between the plates due to tensioning of      bolts. Eg. Slip-critical connects.