The 8255A is a general purpose programmable I/O device designed for use with Intel microprocessors. It consists of three 8-bit bidirectional I/O ports (24I/O lines) that can be configured to meet different system I/O needs.

The 8255A is a general purpose programmable I/O device designed for use with Intel microprocessors. It consists of three 8-bit bidirectional I/O ports (24I/O lines) that can be configured to meet different system I/O needs. The three ports are PORT A, PORT B & PORT C. Port A contains one 8-bit output latch/buffer and one 8-bit input buffer. Port B is same as PORT A or PORT B. However, PORT C can be split into two parts PORT C lower (PC0-PC3) and PORT C upper (PC7-PC4) by the control word. The three ports are divided in two groups Group A (PORT A and upper PORT C) Group B (PORT B and lower PORT C). The two groups can be programmed in three different modes. In the first mode (mode 0), each group may be programmed in either input mode or output mode (PORT A, PORT B, PORT C lower, PORT C upper). In mode 1, the second’s mode, each group may be programmed to have 8-lines of input or output (PORT A or PORT B) of the remaining 4-lines (PORT C lower or PORT C upper) 3-lines are used for hand shaking and interrupt control signals. The third mode of operation (mode 2) is a bidirectional bus mode which uses 8-line (PORT A only for a bidirectional bus and five lines (PORT C upper 4 lines and borrowing one from other group) for handshaking. 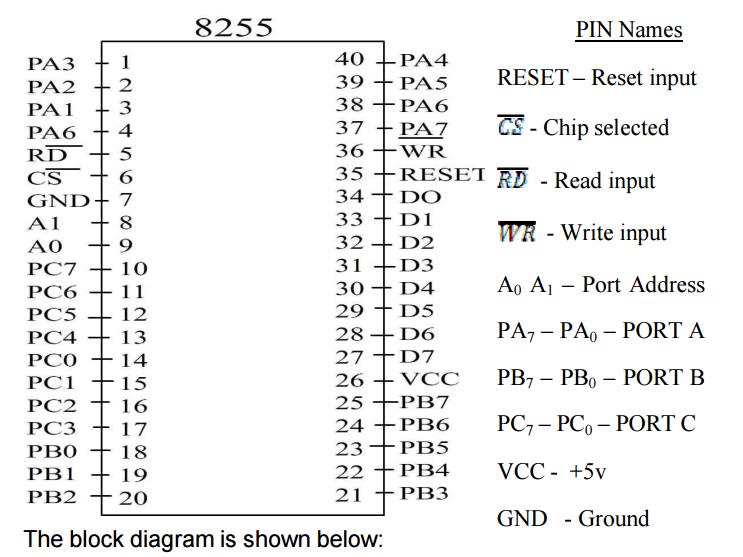 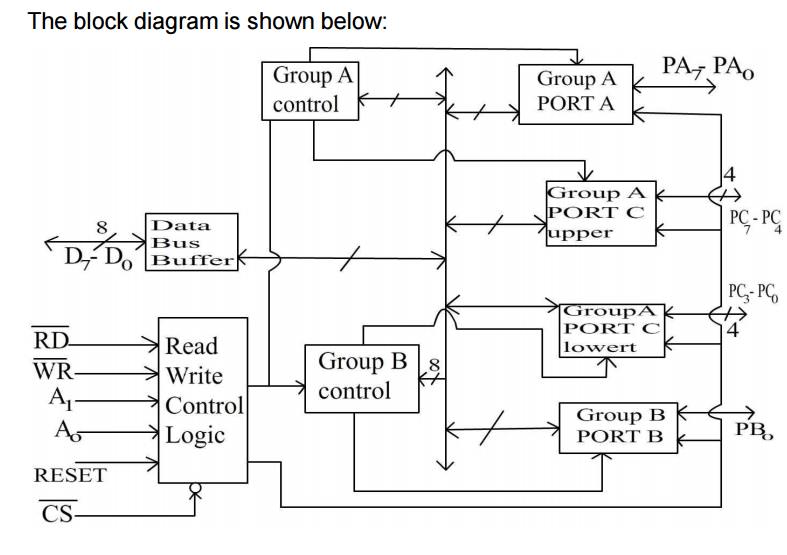 It is a tri-state 8-bit buffer used to interface the chip to the system data bus. Data is transmitted or received by the buffer upon execution of input or output instructions by the CPU. Control words and status information are also transferred through the data bus buffer. The data lines are connected to BDB of p

The function of this block is to control the internal operation of the device and to control the transfer of data and control or status words. It accepts inputs from the CPU address and control buses and in turn issues command to both the control groups.

A low on this input selects the chip and enables the communication between the 8255 A & the CPU. It is connected to the output of address decode circuitry to select the device when it

^(RD) (Read). A low on this input enables the 8255 to send the data or status information to the CPU on the data bus.

control the selection of one of the three ports or the control word registers. They are normally connected to the least significant bits of the address bus (A0 and A1). 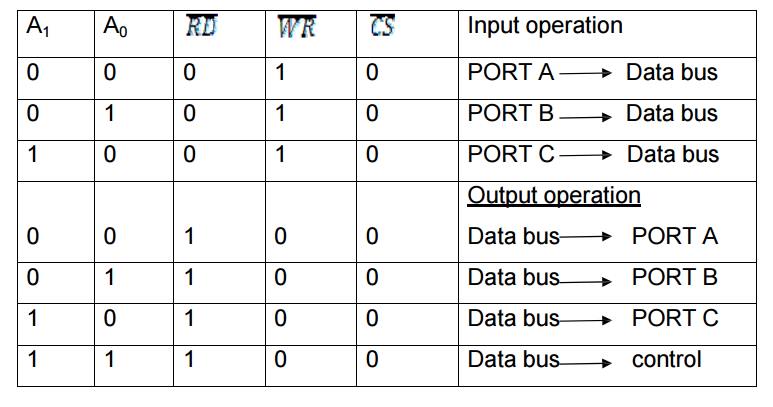 All other states put data bus into tri-state/illegal condition.

A high on this input pin clears the control register and all ports (A, B & C) are initialized to input mode. This is connected to RESET OUT of 8255. This is done to prevent destruction of circuitry connected to port lines. If port lines are initialized as output after a power up or reset, the port might try to output into the output of a device connected to same inputs might destroy one or both of them.

The 8255A contains three 8-bit ports (A, B and C). All can be configured in a variety of functional characteristic by the system software.

One 8-bit data output latch/buffer and one 8-bit data input buffer (no latch for input). This port can be divided into two 4-bit ports under the mode control. Each 4-bit port contains a 4-bit latch and it can be used for the control signal outputs and status signals inputs in conjunction with ports A and B.

Group A & Group B control:

The functional configuration of each port is programmed by the system software. The control words outputted by the CPU configure the associated ports of the each of the two groups. Each control block accepts command from Read/Write content logic receives control words from the internal data bus and issues proper commands to its associated ports.

There are three basic modes of operation that can be selected by the system software.

When the reset input goes HIGH all poets are set to mode’0’ as input which means all 24 lines are in high impedance state and can be used as normal input. After the reset is removed the 8255A remains in the input mode with no additional initialization. During the execution of the program any of the other modes may be selected using a single output instruction.

The modes for PORT A & PORT B can be separately defined, while PORT C is divided into two portions as required by the PORT A and PORT B definitions. The ports are thus divided into two groups Group A & Group B. All the output register, including the status flip-flop will be reset whenever the mode is changed. Modes of the two group may be combined for any desired I/O operation e.g. Group A in mode ‘1’ and group B in mode ‘0’. 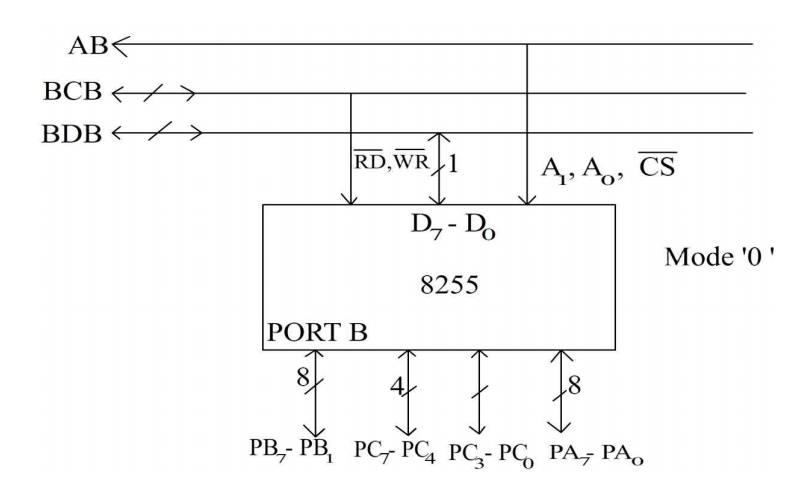