The parallel input-output port chip 8255 is also called as programmable peripheral input- output port. The Intel’s 8255 is designed for use with Intel’s 8-bit, 16-bit and higher capability microprocessors.

The parallel input-output port chip 8255 is also called as programmable peripheral input- output port. The Intel’s 8255 is designed for use with Intel’s 8-bit, 16-bit and higher capability microprocessors.

It has 24 input/output lines which may be individually programmed in two groups of twelve lines each, or three groups of eight lines. The two groups of I/O pins are named as Group A and Group B. Each of these two groups contains a subgroup of eight I/O lines called as 8-bit port and another subgroup of four lines or a 4-bit port.

Thus Group A contains an 8-bit port A along with a 4-bit port. C upper. The port A lines are identified by symbols PA0-PA7 while the port C lines are identified as PC4-PC7. Similarly, Group B contains an 8-bit port B, containing lines PB0-PB7 and a 4-bit port C with lower bits PC0- PC3. The port C upper and port C lower can be used in combination as an 8-bit port C. Both the port C are assigned the same address. Thus one may have either three 8-bit I/O ports or two 8-bit and two 4-bit ports from 8255. All of these ports can function independently either as input or as output ports. This can be achieved by programming the bits of an internal register of 8255 called as control word register (CWR). This buffer receives or transmits data upon the execution of input or output instructions by the microprocessor. The control words or status information is also transferred through the buffer. 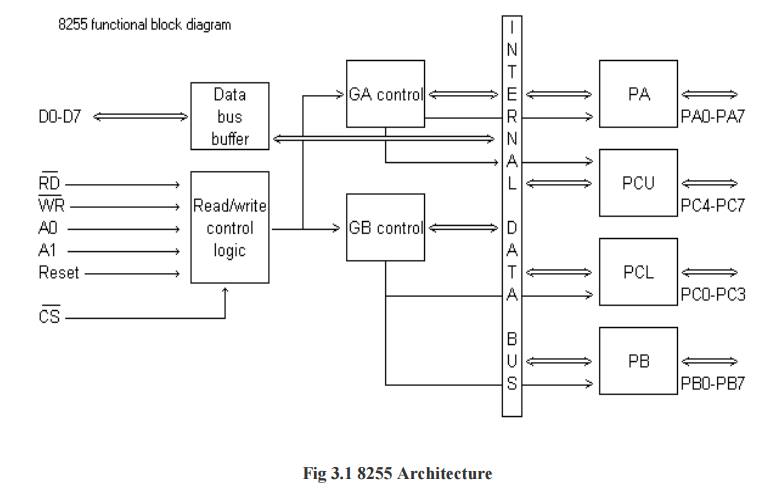 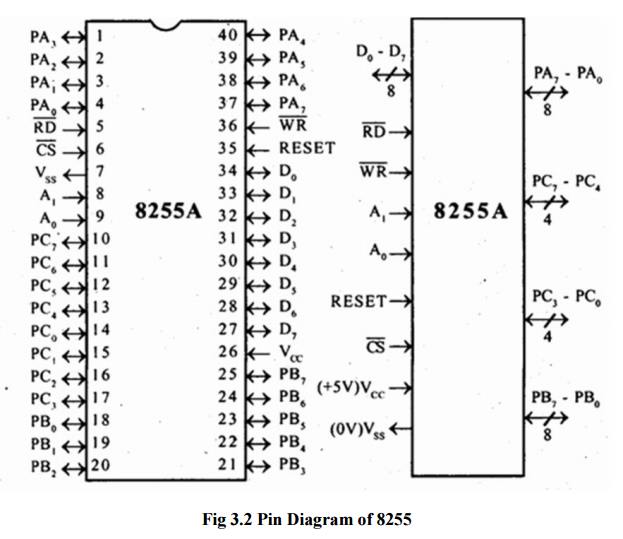 The signal description of 8255 are briefly presented as follows:

ü PC7-PC4: Upper nibble of port C lines. They may act as either output latches or input buffers lines. This port also can be used for generation of handshake lines in mode 1 or mode 2.

ü PC3-PC0: These are the lower port C lines, other details are the same as PC7-PC4 lines.

ü PB0-PB7: These are the eight port B lines which are used as latched output lines or buffered input lines in the same way as port A.

ü RD: This is the input line driven by the microprocessor and should be low to indicate read operation to 8255.

ü WR: This is an input line driven by the microprocessor. A low on this line indicates write operation.

ü A1-A0: These are the address input lines and are driven by the microprocessor. These lines A1-A0 with RD, WR and CS from the following operations for 8255. These address lines are used for addressing any one of the four registers, i.e. three ports and a control word register as given in table below. In case of 8086 systems, if the 8255 is to be interfaced with lower order data bus, the A0 and A1 pins of 8255 are connected with A1 and A2 respectively.

ü D0-D7: These are the data bus lines those carry data or control word to/from the microprocessor.

ü RESET: A logic high on this line clears the control word register of 8255. All ports are set as input ports by default after reset.

There are two main operational modes of 8255:

There are three types of the input/output mode. They are as follows:

In this mode, the ports can be used for simple input/output operations without handshaking. If both port A and B are initialized in mode 0, the two halves of port C can be either used together as an additional 8-bit port, or they can be used as individual 4-bit ports. Since the two halves of port C are independent, they may be used such that one-half is initialized as an input port while the other half is initialized as an output port. The input output features in mode 0 are as follows:

ü I/p are buffered not latched.

ü Port do not have handshake or interrupt capability.

When we wish to use port A or port B for handshake (strobed) input or output operation, we initialize that port in mode 1 (port A and port B can be initialized to operate in different modes, ie, for eg., port A can operate in mode 0 and port B in mode 1). Some of the pins of port C function as handshake lines.

For port B in this mode (irrespective of whether is acting as an input port or output port), PC0, PC1 and PC2 pins function as handshake lines. If port A is initialized as mode 1 input port, then, PC3, PC4 and PC5 function as handshake signals. Pins PC6 and PC7 are available for use as input/output lines. The mode 1 which supports handshaking has following features: 1.

Two ports i.e. port A and B can be used as 8-bit I/O port. 2. Each port uses three lines of port c as handshake signal and remaining two signals can be function as I/O port. 3. Interrupt logic is supported. 4. Input and Output data are latched.

Only group A can be initialized in this mode. Port A can be used for bidirectional handshake data transfer. This means that data can be input or output on the same eight lines (PA0 - PA7). Pins PC3 - PC7 are used as handshake lines for port A. The remaining pins of port C (PC0 - PC2) can be used as input/output lines if group B is initialized in mode 0. In this mode, the 8255 may be used to extend the system bus to a slave microprocessor or to transfer data bytes to and from a floppy disk controller.

In this mode only port b can be used (as an output port). Each line of port C (PC0 - PC7) can be set/reset by suitably loading the command word register.no effect occurs in input-output mode. The individual bits of port c can be set or reset by sending the signal OUT instruction to the control register. 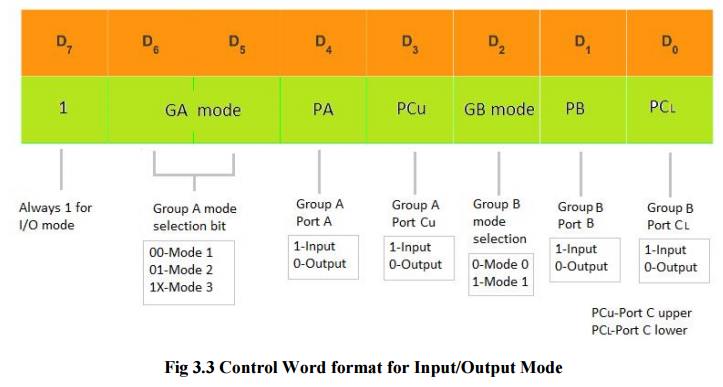 ü The figure shows the control word format in the input/output mode. This mode is selected by making

ü D5, D6 are used for mode selection for group A (Upper Port C and Port A). The format is as follows: 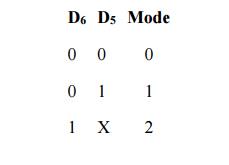 ü The figure shows the control word format in BSR mode. This mode is selected by making

ü D1, D2, D3 are used to select a particular port C bit whose value may be altered using D0 bit as mentioned above. 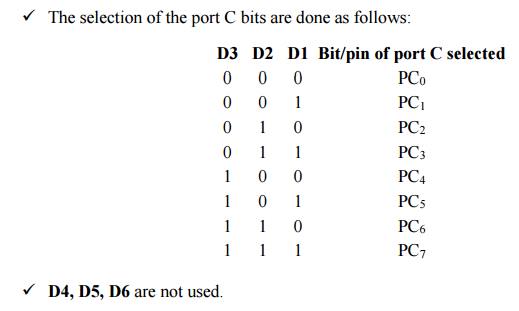