The hypothalamus forms the lowest layer and the floor of the diencephalon, consisting of the optic chiasm, the tuber cinereum tapering into the funnel-shaped in-fundibulum (hypophysial stalk), and the mamillary bodies.

The hypothalamus forms the lowest layer and the floor of the diencephalon, consisting of the optic chiasm, the tuber cinereum tapering into the funnel-shaped in-fundibulum (hypophysial stalk), and the mamillary bodies. The hypothalamus is thecentral region for the control of autonomic functions; it influences not only the auto-nomic nervous system but also the en-docrine system via its connection to the hy-pophysis, and it coordinates the two. The hypothalamus is divided into two parts, the poorly myelinated and the richly myelinated hypothalamus.

This includes the preoptic region in front of the optic chiasm, the tuber cinereum, the lateral field (A1) lying dorsolaterally to thetuber cinereum, and the dorsocaudal area (B2) above the mamillary bodies. The poorly myelinated hypothalamus is the part of the brain that is richest in peptidergic neurons. The different neuropeptides can be demon-strated in diffusely scattered cells (luliberin, cholecystokinin, thyoliberin), in per-iventricular cell aggregations (soma-tostatin), and in the nuclear areas (neu-ropeptides in various compositions). Numerous fiber connections within the hy-pothalamus and some of the long projection tracts are peptidergic.

The preoptic region (C3) extends from the anterior commissure (C4) to the optic chiasm (C5) as a parvocellular field surrounding the most rostral excavation of the third ven-tricle, the preoptic recess. The region con-tains a large number of peptidergic neurons (containing primarily enkephalin). Two prominent magnocellular nuclei lie adja-cent to it, namely, the supraoptic nucleus(AC6) and the paraventricular nucleus (AC7). The supraoptic nucleus borders on the optic tract (A8). Its neurons contain cholecys-tokinin and dynorphin. The paraventricular nucleus lies close to the wall of the third ventricle, separated from the ependymal(the simple cell layer lining the walls of the ventricular system, p. 284) only by a layer of glial fibers, and extends as a narrow band obliquely upward into the region of the zona incerta. Its peptidergic neurons have been shown to contain corticoliberin, neu-rotensin, cholecystokinin, as well as other neuropeptides.

The principal nucleus of the tuber cinereum (A9) is the ventromedial nucleus (AC10), a round body occupying most of the tuber cinereum. It contains medium-sized neu-rons, among them many peptidergic (con-taining primarily neurotensin), and is sur-rounded by a delicate fiber capsule formed by the pallidohypothalamic fasciculus. The dorsomedial nucleus (AC11) is less distinctand contains small neurons. At the base of the infundibulum lies the parvocellular in-fundibular nucleus (AC12). Its cells encirclethe infundibular recess and reach directly into the ependyma. The neurons of this nu-cleus contain primarily endorphin and ACTH (adrenocorticotropic hormone). 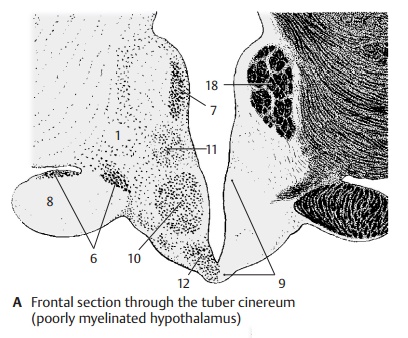 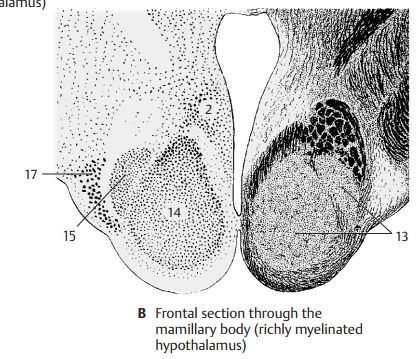 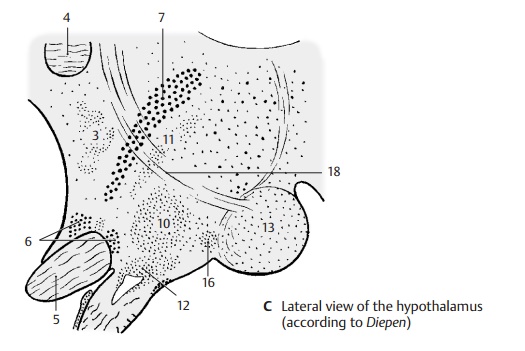 The mamillary body (BC13) forms the caudal segment of the hypothalamus. It appears as a round bulge, a myelinated region that is surrounded by a prominent capsule. The latter is formed by afferent and efferent fiber tracts, namely, medially by fibers of the mamillothalamic fasciculus (Vicq d'Azyr’sbundle) and the mamillotegmental fasciculus (Gudden's tract), and laterally by fibers of the fornix.

The mamillary body is divided into a medial and a lateral nucleus. The large medial nu-cleus (B14) contains small neurons. It isspheroid and makes up the round body that is visible at the base of the brain. The lateralnucleus (B15) is dorsolaterally attached tothe medial nucleus like a small cap. The mamillary body is surrounded by nuclear regions of the poorly myelinated hypo-thalamus, namely, the premamillary nucleus (C16)  and  the  tuberomamillary  nucleus(B17).

The close association of the nervous system with the endocrine system is revealed by the extraordinarily rich vascular supply of individual hypothalamic nuclei. The su-praoptic nucleus (A1) and the paraventricu-lar nucleus (A2) are about six times morevascularized than the rest of the gray mat-ter. Their neurons have close contact with the capillaries, some of which are even en-closed by the neurons (endocellular capil-laries). 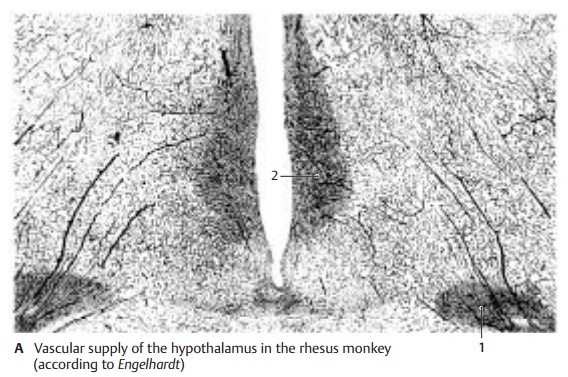 Fiber Connections of the Poorly Myelinated Hypothalamus (B)

Numerous connections transmit olfactory, gustatory, viscerosensory, and soma-tosensory impulses to the hypothalamus. These are usually loose and divergent sys-tems, and almost all of them are bidirec-tional. The following are the most important ones.

The medial forebrain bundle (medial telen-cephalic fasciculus), containing the olfacto-hypothalamotegmental fibers (B3), con-nects almost all hypothalamic nuclei with the olfactory centers and with the reticular formation of the midbrain. The bundle con-tains a large number of peptidergic fibers (VIP [vasoactive intestinal peptide], enkephalin, somatostatin).

The terminal stria (B4) runs in an arch around the caudate nucleus and connects the amyg-daloid body (B5) (pp. 226, 228) with the pre-optic region (B6) and the ventromedial nu-cleus (B7). It is rich in peptidergic fibers.

The fibers of the fornix (BC8) originate from the pyramidal cells of the hippocampus (BC9) and the subiculum and terminate in the mamil-lary body (BC10). A large portion of the for-nix fibers are peptidergic. At the level of the anterior commissure, fibers branch off from the fornix to the preoptic region and to the tuberal nuclei (B7). 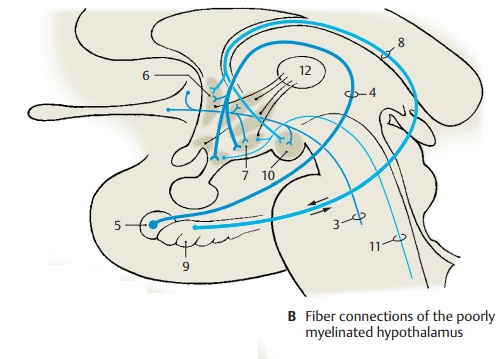 The dorsal longitudinal fasciculus, or Schütz’s bundle  (B11), is the most impor-tant component of an extensive periventric-ular fiber system. At the transition to the midbrain, fibers collect to form a compact bundle that connects the hypothalamus with the nuclei of the brain stem.

Connections with thalamus and pallidum: Thehypothalamic nuclei are connected by peri-ventricular fibers with the medial nuclei ofthalamus (B12), the fibers of which projectto the frontal cortex. In this way, an indirect connection is established between hypo-thalamus and frontal cortex. The pallidohy-pothalamic fasciculus runs from the globuspallidus to the tuberal nuclei (ventromedial nucleus).

Primarily afferent pathways of the mamil-lary body (BC10) are the fornix (BC8), the fibers of which terminate primarily in the mamillary body, and the peduncle of themamillary body (C13) from the tegmental nu-clei of the midbrain, which is thought to contain also gustatory fibers, vestibular fibers, and fibers from the medial lemniscus. 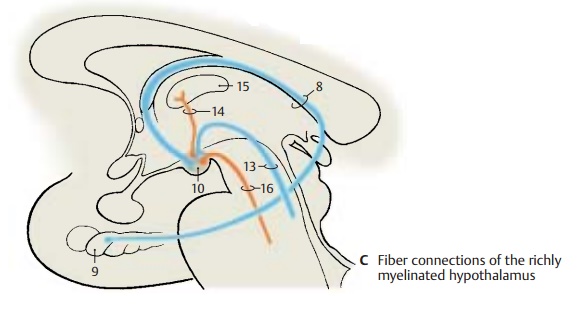 Primarily efferent pathways are repre-sented by the mamillothalamic fasciculus (Vicq d'Azyr’s bundle) (C14) which ascends to the anterior nucleus of thethalamus (C15). The projection of the ante-rior nucleus to the cingulate gyrus estab-lishes a connection between the hypo-thalamus and the limbic association cortex.The mamillotegmental fasciculus (C16) termi-nates in the tegmental nuclei of the mid-brain. All pathways contain a high propor-tion of peptidergic fibers.

Functional Topography of the Hypothalamus

The centers of the hypothalamus influence all processes that are important for the in-ternal environment of the body; they regu-late the performance of organs according to the actual physical load, that is, they control the balance of temperature, water, and elec-trolytes; the activity of the heart; circula-tion and respiration; metabolism; and the rhythm of sleeping and waking.

Vital functions (such as food intake, gastrointestinal activity and defecation, fluid intake and urination) are controlled from here, and so are the processes essential for the preservation of the species (procrea-tion and sexuality). These vital activities are triggered by physical needs that are per-ceived as hunger, thirst, or sexual drive. In-stinctive activities serving the preservation of the organism are usually accompanied by a strong affective component, such as desire or aversion, joy, anxiety, or anger. Hypo-thalamic excitation plays an important role in the creation of these emotions.

Electric stimulation of the hypothalamus evokes autonomic reactions that can be divided into two groups (A): those as-sociated with regeneration and metabolic processes (blue symbols: contraction of the pupils; slowing down of respiration; drop in blood pressure

; urination; defe-cation), and those associated with in-creased performance in response to the en-vironment (red symbols: dilation of the pupils

; accelerated respiration ; in-crease in blood pressure ). Stimulation re-sponses from specific regions have estab-lished a dorsocaudal and lateral region for the dynamogenic mechanisms, the dynamo-genic zone (B1), and a ventro-oral region forthe mechanisms promoting regeneration, the trophotropic zone (B2). The two regionscorrespond to the subdivision of the periph-eral autonomic nervous system into a sym-pathetic component (dynamogenic) and a parasympathetic component (trophotropic). In humans, controlled stimulation of the caudal hypothalamus (C) yielded sim-ilar results, namely, dilation of pupils (C3), increase in blood pressure (C4), and accel-erated respiration (C5). 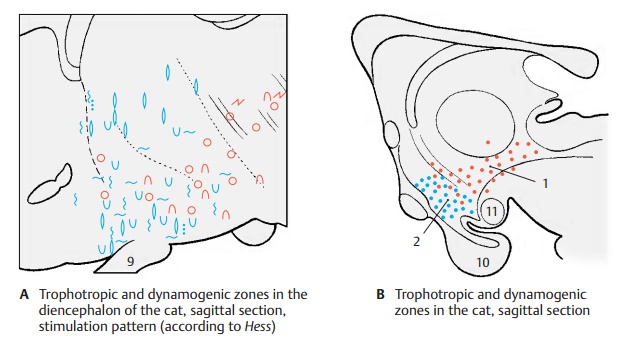 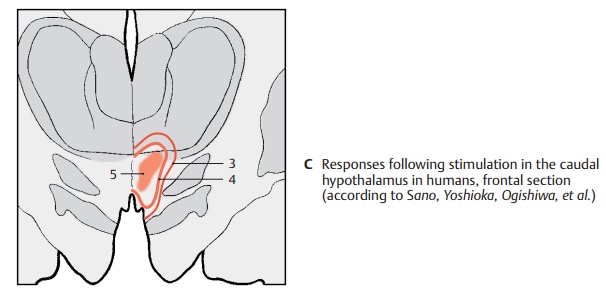 Experiments of these types reveal the sig-nificance of defined regions for the regula-tion of certain processes; destruction of the tuber cinereum in the region of the infun-dibular nucleus (D6) in juvenile animals leads to atrophy of the gonads. On the other hand, lesions between optic chiasm and tuber cinereum in infantile rats result in premature sexual development. Estrous cycleand sexual behavior are affected by lesions to the hypothalamus. Lesions to the caudal hypothalamus between the tuber cinereum and the premamillary nucleus (E7) lead to adipsia (cessation of spontaneous drinking).More dorsal lesions result in aphagia (re-fusal to eat), while dorsal stimulation (F8) results in hyperphagia (compulsive eating). In the anterior hypothalamus at the level of the optic chiasm lies a region responsible for the control of body temperature. Stimula-tion in the vicinity of the fornix triggers fits of rage and aggressive behavior (perifornicalzone of rage).