The circulatory system is self-sealing. Hemostasis rapidly stops all but the most catastrophic bleeding in normal individuals. If the lining of a blood vessel is damaged, eventually a platelet plug is formed that prevents further blood loss. Blood clotting is then initiated leading to the deposition of fibrin and the formation of a clot to seal the wound. Wound healing can then begin.

Blood clotting occurs in one of two pathways, the so-called intrinsic and extrinsic pathways. These pathways each have a number of unique reactions but, in the end, both pathways activate the final clotting stage, which is the formation of fibrin. The clotting pathways involve a group of plasma proteins that act in sequence, each activating the next in line. The end result is the conversion of soluble fibrinogen to the insoluble fibrin, which polymerizes to form a clot at the site of the damage and critically not elsewhere (Figure 13.10).

About 20 plasma proteins or plasma clotting factors are produced by the liver and circulate in the blood as inactive proteins. They were called factors long before anything was known of their chemical nature. They are identified by Roman numerals although some of them also have common names (Table13.3). However, their numbering is unfortunately not in a logical order with 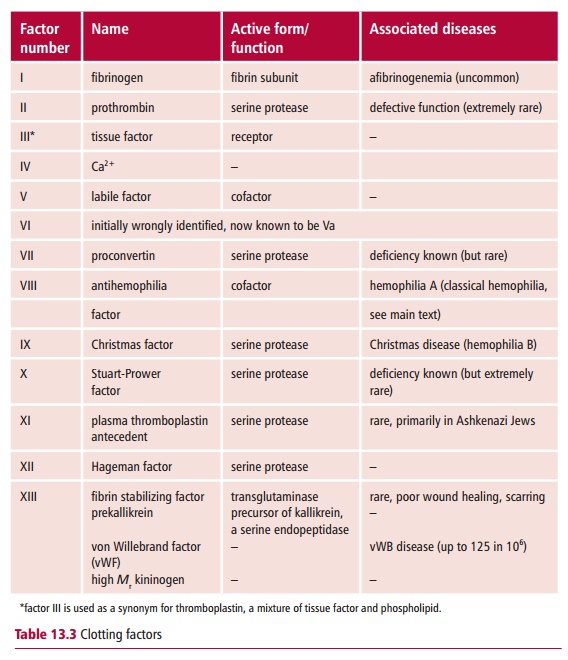 reference to the clotting process. Their activated forms are distinguished by a lower case ‘a’; thus the activation of Factor VIII produces Factor VIIIa. Many of them become proteases when activated but, as each factor catalytically activates the next one in sequence, a small amount of the first factor produces a very large reaction at the end of the pathway. Thus the cascade of clotting reactions is an amplification of an initial small stimulus and leads to the production of large amounts of fibrin forming a clot.

It is convenient to divide clotting factors into four groups based on what they do in the clotting process. The first group consists of zymogens, which become active proteases when subjected to specific proteolytic cleavage. The second group contains cofactor proteins that bind to zymogens and their protease products, increasing the specificity and speed of the activation. The third group of factors contains protease inhibitors, which inactivate the proteases after their roles in the clotting process are complete. The fourth group is a miscellaneous group. It includes fibrinogen, which is cleaved to form fibrin, Factor XIII/XIIIa, a transglutaminase that catalyzes the formation of covalent cross-links between fibrin molecules, which stabilizes the clot, and von Willebrand factor which can anchor platelets to the endothelium of blood vessels and which also carries Factor VIII in the plasma.

The intrinsic pathway is a sequence of reactions that are catalyzed by enzymes, which become activated when tissue is injured (Figure 13.11). This pathway can take several minutes for completion. Damage to the wall of a blood vessel or to the endothelium that lines it results in the exposure of collagen to which platelets stick and become activated. The platelets degranulate, releasing a range of highly active substances, including serotonin (5-hydroxytryptamine or 5-HT) and ADP, as well as certain growth factors, such as platelet derived growth factor (PDGF), which has a role in subsequent wound healing. Serotonin (Figure 7.5) is a powerful vasoconstrictor and causes the blood vessel to constrict, temporarily limiting the blood supply to the damaged area until clotting takes place. This is a temporary effect, and a clot must form soon. The period before blood flow stops is called the bleeding time and is normally two to six min. Plateletaggregation occurs as the released ADP activates other platelets and thesein turn activate others to extend pseudopodia and become sticky and clump with those already adhering to the damaged area. This forms a plug that prevents further blood loss. Fibrin is then deposited in the loose platelet plug, which traps more platelets as well as blood cells, strengthening the clot. The clotting time is usually six to 12 min. 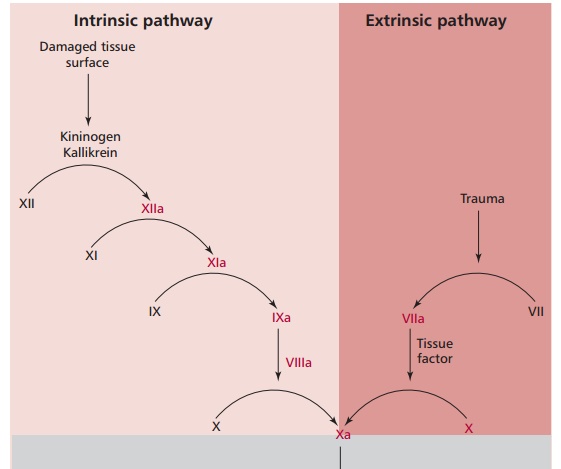 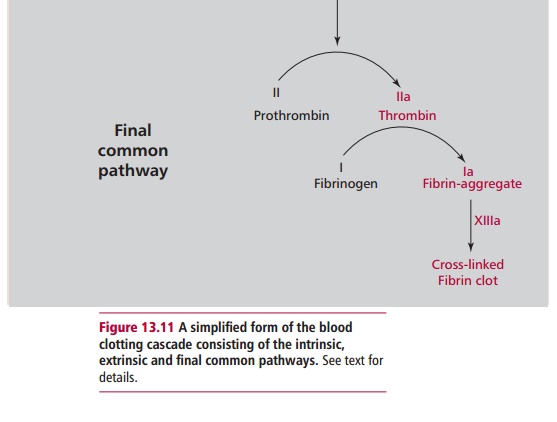 A complex cascade of reactions is required to produce fibrin. These are initiated by the binding of Factor XII (Hageman factor) to tissue collagen and anionic surfaces that somehow changes its conformation to Factor VIIa allowing it to convert prekallikrein to kallikrein. Kallikreins are serine endopeptidases that are widely distributed in mammalian tissues and body fluids. Plasma kallikrein, also known as kininogenin or Fletcher Factor, cleaves bonds in kininogen to produce a varied group of polypeptides, which include angiotensin, bradykinin, substance P and secretin. Kallikrein also activates the bound Factor XII to form Factor XIIa, in a reaction that also requires highMrkininogen as a cofactor. Factor XIIa and high Mrkininogen activate Factor XI (plasma thromboplastin antecedent) to Factor XIa. Factor XIa also binds to the exposed surfaces of the tissue where injury has occurred. Here it catalyzes the conversion of Factor IX (Christmas factor) to Factor IXa in a reaction that requires Ca2+. The final reaction, unique to the intrinsic pathway, involves the conversion of Factor X (Stuart factor) to Factor Xa, the final product, and is catalyzed by Factor IXa. This reaction also requires Factor VIII, the antihemolytic factor found on the surface of aggregated platelets and Ca2+.

The extrinsic pathway is so called because it requires the nonplasma protein, thromboplastin to initiate the cascade (Figure 13.11). Thromboplastin is an integral membrane protein found in many tissues but especially the walls of blood vessels, brain, lung and placenta. The initial reaction is the conversion of Factor VII (proconvertin) to Factor VIIa in a reaction that requires Ca2+ and phospholipids released from the injured tissue or from the surface of aggregated platelets. Damaged tissues also release thromboplastin which, in combination with Factor VIIa and Factor IXa from the intrinsic pathway, directly activates Factor X to Xa. The final result of this part of the pathway is the production of Factor Xa. Thus the final product of the extrinsic pathway, like the intrinsic, is the production of Factor Xa. Despite this, deficiencies in either pathway result in prolonged bleeding times.

Factor Xa from the intrinsic and extrinsic pathways catalyzes the hydrolysis of Factor II, or prothrombin to thrombin (Figure 13.11). There is an intermediate stage as prothrombin is first converted into prethrombin, which is slowly converted to thrombin. Factor Xa by itself is a relatively slow prothrombin activator, but its activity is enhanced about 20 000-fold by Ca2+, Factor V (proaccelerin) and negatively charged phospholipids, for example phosphatidylserine, from damaged cell membranes. These types of phospholipids occur almost exclusively on the cytosolic sides of cell membranes, which, of course, are not usually in contact with the blood. Hence clotting reactions take place on the surface of the platelets so that the clotting action is confined to the sites of injuries.

Thrombin is a serine protease that catalyzes the hydrolysis of fibrinogen to fibrin, the final reaction of the clotting cascade. Fibrinogen forms 23% of the plasma proteins. It consists of three pairs of polypeptides and two pairs of oligosaccharides (Figure 13.12). 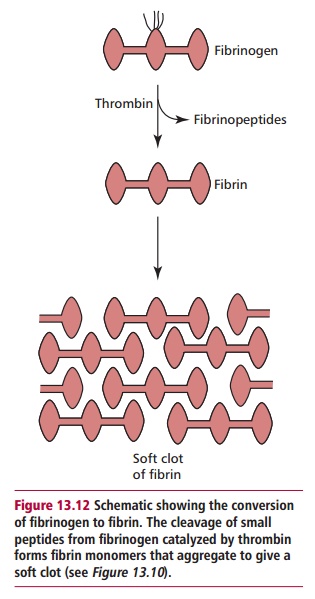 Thrombin cleaves four peptide bonds in the fibrinogen molecule, releasing two A and two B fibrin peptides from the amino terminal ends of the fibrinogen polypeptides changing the net charge from positive to negative. In the presence of Factor XIIIa and Ca2+, the fibrin monomers polymerize producing a stable clot. The clots formed are strengthened by cross-links formed by the transaminase, Factor XIIIa, which is also activated by thrombin. Within the clot, the platelets contract, reducing the clot to less than half its original size and one that is tougher and more elastic. The process also draws the edges of the wound together.

It is clearly important that clots do not form in the absence of injury. There are several systems to prevent this occurring. The protein factors constantly circulate in the blood but, of course, require specific activation before clotting can take place; in addition, the liver removes activated factors. However, this is a slow preventative measure. A more rapid mechanism is effected by antithrombin III, which is a natural clotting inhibitor that binds to all of the serine proteases of the clotting cascade, especially thrombin, and inhibits their proteolytic activities. Heparin (Figure 13.13), a sulfated polysaccharide found in the circulation, activates antithrombin III. In addition, the plasma protein, α 2-macroglobulin also inhibits the clotting cascade. Patients with antithrombin III deficiency have an increased risk of thrombosis and resistance to the action of heparin.