Clinical problems occur if the blood fails to clot as, for example, in hemophilia, or if it clots too easily or inappropriately, as in a coronary thrombosis . Thus analytical methods to clinically investigate the clotting abilities of blood samples are necessary. These blood samples require the addition of Ca2+ chelating agents, such as oxalate, citrate, EDTA or heparin to prevent them clotting and centrifugation to remove blood cells. The addition of excess Ca2+ or the removal of the chelating agents to the remaining plasma allows it to clot. Thus, the clotting of blood from patients can be studied in the pathology laboratory and any defects identified to help with the diagnosis and monitoring of treatment. For example, the prothrombin time, a measure of the activity of the extrinsic pathway, can be estimated. Thromboplastin is added to blood from the patient into a tube containing citrate to chelate the Ca2+ and the time taken for a fibrin clot to form noted. The thrombin time is a measure of the activity of thrombin. It is determined by adding thrombin to plasma and waiting for the clot to form. It is also possible to measure the activity of the intrinsic pathway by estimating the partial thromboplastin time. Calcium ions and phospholipids are added to plasma which is then exposed to a surface to activate Factor XII and the time taken for a clot to form is noted.

Like most of the other blood clotting proteins, prothrombin is synthesized in the liver in a process that requires vitamin K, one of the fat-soluble vitamins . A lack of vitamin K leads to the production of abnormal prothrombin that is activated by Factor X at only about 1% of the normal rate. Normal prothrombin contains 10 γ-carboxyglutamate residues. Vitamin K (Figure 13.26 (A)) is a cofactor required for the enzymic conversion of the relevant glutamates in the protein to the γ -carboxyglutamate residues (Figure13.26 (B)). Dicoumarol and warfarin (Figure 13.27 (A) and (B)) are competitive 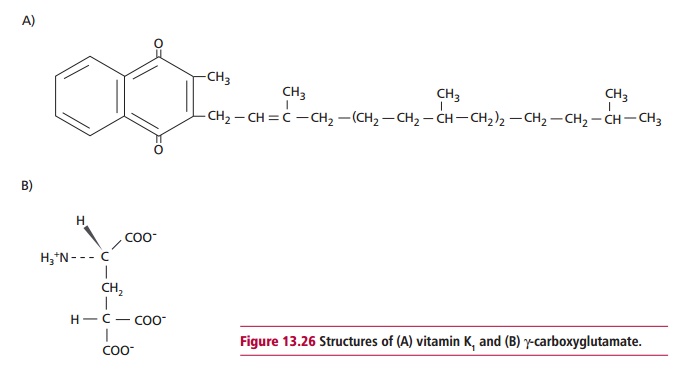 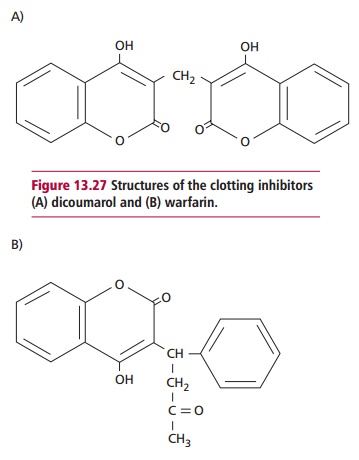 inhibitors of this process. Dicoumarol was first discovered in spoiled sweet clover because it causes fatal hemorrhages in cattle, and warfarin was originally developed as rat poison. Agents such as warfarin are used for anticoagulant therapy. They are slow to produce effects but they have long plasma half-lives and so can be active for days .

The bleeding disease, hemophilia, is caused by a genetic lack of clotting factors. In these disorders, the bleeding time is normal but the clotting (or coagulation) time prolonged. The symptoms are a tendency for hemorrhages, that is blood loss, either spontaneous or from even small injuries. Some patients with hemophilia A may have a normal prothrombin time because their concentration of tissue factor is high. The commonest of the hemophilias is hemophilia A, in which Factor VIII is deficient. In north America, about 80% of the cases are hemophilia A. This deficiency is sex-linked to males, with a frequency of about one in 5000 to 10 000. The plasma levels of Factor VIII in patients with severe hemophilia A are less than 5% of normal. Hemophilia B, the second commonest form of hemophilia, is due to a lack of Factor IX. Factor IX is also called Christmas Factor because it was first found to be missing in a patient named Stephen Christmas.

In the past, hemophilias were treated by blood transfusion. However, repeated transfusion brings the possibility of infection with HIV or hepatitis, as well as the possibility of immune reactions and iron overload. Initial treatments involved purifying the factor from human plasma obtained from pooled blood. Modern treatment involves injections of Factor VIII prepared by recombinant DNA technology. This eliminates any chance of infection but is expensive. The same treatments are applicable to hemophilia B.