Glucose 6-phosphate dehydrogenase is the first enzyme of the pentose phosphate pathway (PPP), sometimes called the hexose monophosphate shunt, of glucose metabolism. It catalyzes the reaction:

The PPP offers an alternative route from glycolysis and the TCA cycle for the complete oxidation of glucose. Erythrocytes can carry out glycolysis and generate ATP but have no mitochondria and so cannot use the TCA cycle. Their pentose phosphate pathway is also necessary to produce the NADPH, a form of reducing power essential for a number of metabolic activities. The gene for glucose 6-phosphate dehydrogenase is on the X chromosome and G6PD is therefore a sex-linked condition affecting males  It is, however, carried by females who have half the normal level of the enzyme. Female carriers, like sickle cell patients, are more resistant to the malarial parasite, presumably because the host cells provide a less suitable habitat for the malarial parasite and/or because the cells lyse before the parasite can mature. However, the presence of G6PD in males, who only have one X chromosome, or in homozygous females, has little antimalarial effect for reasons that are not clear.

Genetic deficiency of glucose 6-phosphate dehydrogenase (G6PD) is common in Africa, the Middle East, South East Asia and the Mediterranean region. It is estimated that about 400 million people are affected making it the most common inherited disease. Many hundreds of different mutations are known but the commonest is the African or A type present in about 11% of blacks. The degree of deficiency is mild with enzyme activity being about 10% of usual levels and erythrocytes can manufacture sufficient NADPH under normal circumstances.

Several hundred different mutant variants of the enzyme are known that are unstable or have abnormal kinetics resulting in a reduced enzyme activity. Erythrocytes are most severely affected in G6PD because they have a long life in circulation and cannot carry out protein synthesis to replace the defective enzyme. However, most patients can make enough NADPH under normal conditions and the defect may only become apparent when the person takes a drug, such as the antimalarial, primaquine (Table 13.7), that greatly increases 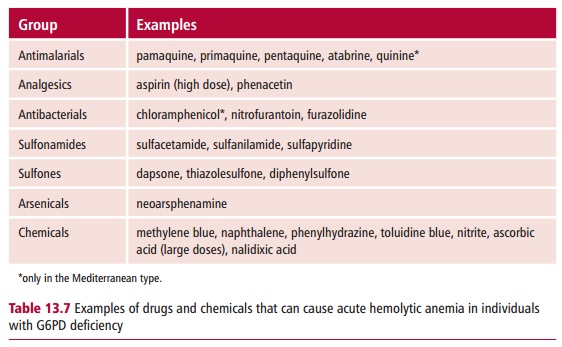 the demand for NADPH. Many different drugs besides antimalarials, that require NADPH for their detoxification, can bring on a crisis. In individuals with a severe form of the disease, oxidative stress may lead to severe hemolytic anemia with a loss of 30–50% of the erythrocytes. Heinz bodies ( Figure 13.20) may be present. The urine may turn black because ofthe high concentrations of Hb and its degradation products, and a high urine flow must be maintained to prevent renal damage. 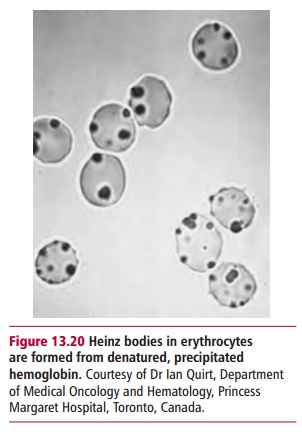 The requirement for NADPH relates to the need for glutathione (GSH) a sulfur containing tripeptide that was met. Glutathione contains a thiol (–SH) group that is readily oxidized (Figure 13.25). A major function of glutathione in erythrocytes is to eliminate hydrogen peroxide, H2O2, which is 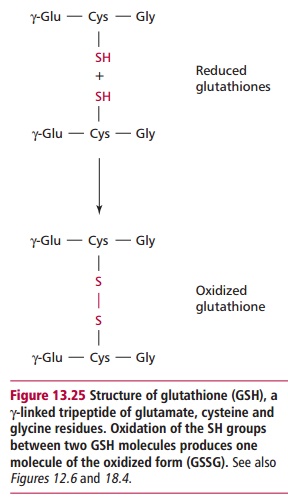 a toxic product of a number of reactions. Hydrogen peroxide can react with unsaturated fatty acids in the erythrocyte membrane forming hydroperoxides, damaging the membrane and leading to premature cell lysis. The peroxides are eliminated by the action of glutathione peroxidase, which requires glutathione as a reducing agent:

There is only a limited amount of glutathione in the cell and the reduced form must be regenerated. This takes place in an NADPH-requiring reaction, catalyzed by glutathione reductase:

Consequently a steady supply of NADPH is required for erythrocyte integrity.

Favism is a hemolytic crisis brought on by the consumption of fava or broadbeans (Vicia fava) by some, but not all, individuals with G6PD. Infants are especially susceptible. It is not understood why only some patients are susceptible but it has been suggested that another mutation must also be present for favism to be shown. Broad beans contain small quantities of toxic glycosides, which, like the antimalarials, increase the demand for NADPH.

They are a popular item in the diet in the Mediterranean, an area where G6PD is endemic. Favism is frequently fatal unless a large volume of blood is transfused promptly.