All of the cells of the blood originate from pluripotent stem cells in the bone marrow.

All of the cells of the blood originate from pluripotent stem cells in the bone marrow (Figure 13.2). Chemical signals, such as cytokines , direct primordial stem cells to develop in different ways to produce erythrocytes, leukocytes of various types, and megakaryocytes, which are the precursorsof platelets. 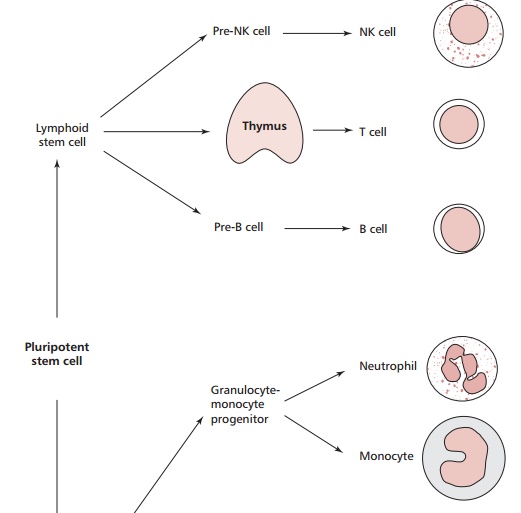 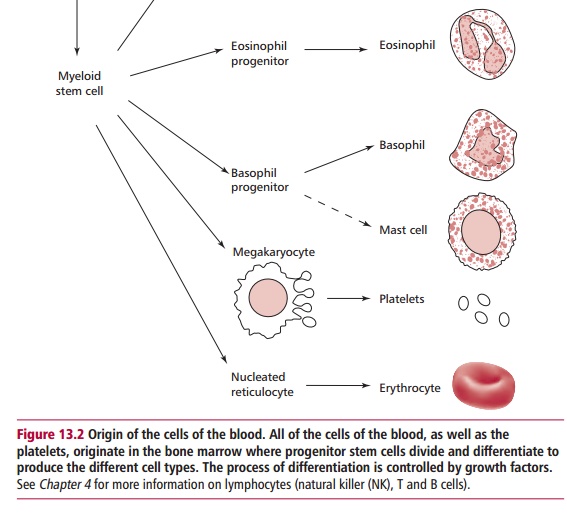 Normoblasts are erythroid cells that arise from divisions of pluripotent stem cells. Eventually these lose their nuclei giving rise to reticulocytes, which contain mRNAs for globins and are still able to synthesize hemoglobin (Hb), and which are the precursors of the erythrocytes. The reticulocytes circulate in the blood for 1

2 days before maturing to erythrocytes, and normally constitute 1 2% of the circulating red cells. Erythrocytes are the most numerous cells in the blood. Adult males and females have erythrocyte counts of about 5.5 and 4.8 s 1012 dm–3, respectively. The number of cells in a given volume of blood can be determined using a hemocytometer (Figure 13.3). About 2 s 1011 mature erythrocytes are formed daily. They have no nuclei or other organelles and are biconcave in shape (Figure 13.1). Erythrocytes circulate for about 120 days and are then removed from circulation and destroyed by macrophages in the liver and spleen. Hemoglobin is the red protein found in the erythrocytes that carries dioxygen (O2) and which also plays an important role in buffering, maintaining the pH at 7.4 p 0.1 . The iron-containing heme is removed from the Hb of defunct erythrocytes and its porphyrin ring is converted to bilirubin, which is excreted in the bile. The iron is conserved and recycled. Iron circulates in the blood attached to a transportprotein called transferrin and stored in the liver and spleen cells in a storage protein called ferritin (Figure 13.4 (A) and (B)). Excessive breakdown of Hb produces more bilirubin than can be excreted and this accumulates in the tissues causing jaundice . 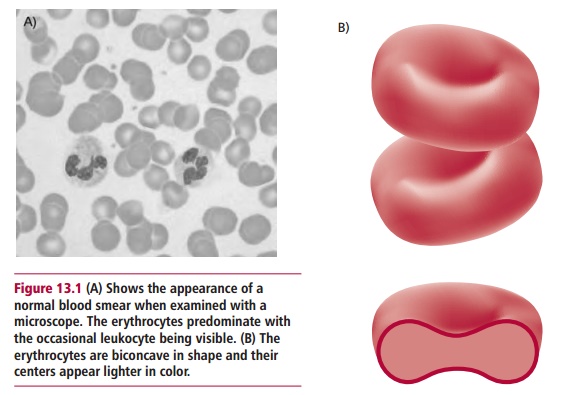 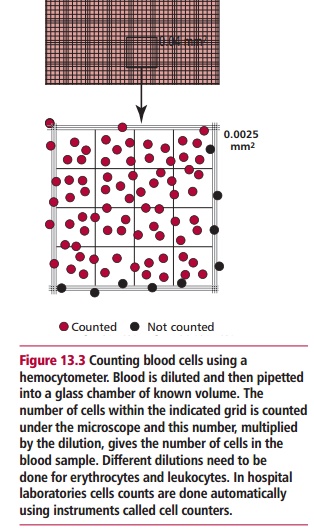 There are several types of leukocytes or white cells in the blood, each with its own function. The total white cell count in an adult is between 4 and 11 x 109 dm–3 but there is considerable variation. White cells were originally classified on the basis of which microscopic stain they took up, whether they had a granular cytoplasm, and whether the nucleus was lobed. The three main types of leukocyte are called polymorphonucleocytes (PMN, but sometimes referred to as polymorphs), lymphocytes and monocytes . Polymorphonucleocytes are further subdivided into neutrophils (57% of the total white cell population) that contain neutral staining granules, eosinophils (3.5%) which contain acid-staining granules, and basophils (0.5%) which contain basic staining granules (Figure 13.2). Polymorphonucleocytes release chemokines some of which are mediators of inflammation as described. Neutrophils can migrate to areas of infection and phagocytosebacteria. Eosinophils seem to be more concerned with dealing with larger parasites and their number also increases in allergic diseases. Basophils and the similar mast cells , which are found mostly in the skin, can release histamine from their granules and this also contributes to some types of allergic responses. 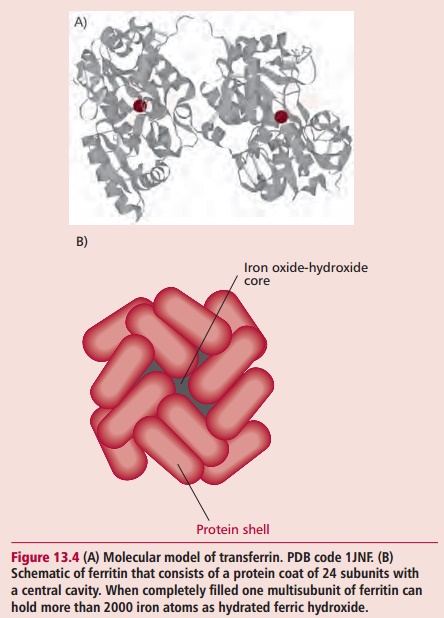 Lymphocytes are key components of the immune system. Monocytes circulate in the blood for about 72 h and then enter the tissues and transform into macrophages, which play a key role in inflammation and defense .

Platelets are vesicle-like structures about 3 Mm in diameter with a volume of 7 fdm3 (femtodecimeters3 or femtoliters). They are formed by the fragmentation of large precursor cells called megakaryocytes and, like erythrocytes, are not complete cells although they contain numerous granules, some organelles and a tubular system (Figure 13.5). Their lifespan is 10 12 days and they function in blood clotting or hemostasis. 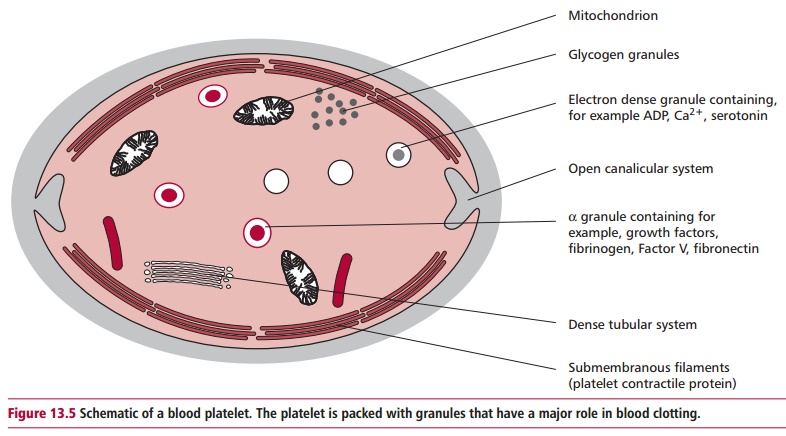