Anemia develops when the amount of Hb in the blood falls below the reference levels for an individual’s age and sex.

Anemia develops when the amount of Hb in the blood falls below the reference levels for an individual’s age and sex (Table 13.4) and there is insufficient iron for Hb synthesis. Anemia may be caused by major blood loss, or as a consequence of defects with Hb, the hemoglobinopathies, and by deficiencies of, for example, iron or some vitamins. The characteristic signs of anemia are pallor, tachycardia, a fast heart rate, cardiac failure and epithelial changes including brittle nails, spoon-shaped nails, atrophy of the tongue papillae, angular stomatitis and brittle hair. Other signs specific to the type of anemia may also be present. However, anemic patients may be asymptomatic, even when the anemia is quite severe, or may present with various nonspecific symptoms, such as fatigue, headache, breathlessness, angina on effort or palpitations . Rapid onset of anemia tends to cause more symptoms than slow onset, and the elderly tolerate anemia less well than the young when the normal compensation of increased cardiac output is impaired. The body responds to anemia with a variety of physiological responses. For example, the heart responds with an increased stroke volume and tachycardia to increase its output . The oxygen binding curve of Hb can be modified by the production of 2,3 bisphosphoglycerate (BPG), which increases the release of O2 from oxyhemoglobin to the tissues. In iron deficiency anemia, the concentration of BPG can increase by 40–75%. 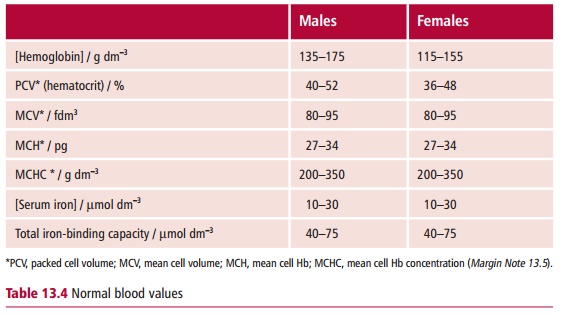 The reduced amount of Hb in anemia is usually accompanied by a reduction in the erythrocyte count and the packed cell volume that are usually determined in hospital laboratories using an automated blood analysis system (Figure13.15). These types of systems can determine all hematological indices, forexample the Hb concentration, packed cell volume (PCV) and the erythrocyte count (RBC), for numerous samples rapidly and efficiently. The mean cell volume (MCV), mean cell Hb (MCH) and mean cell Hb concentration (MCHC) can be derived from these measured values . The investigation of anemia should also consider the reticulocyte, white cell and platelet counts and any abnormal morphology as seen in a blood and/or marrow when examined with a microscope. 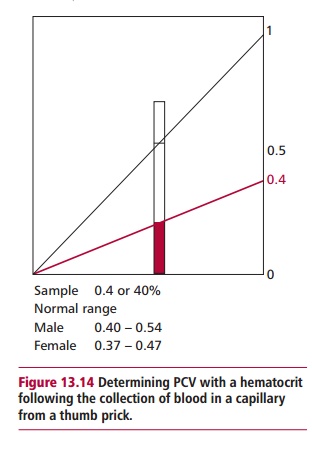 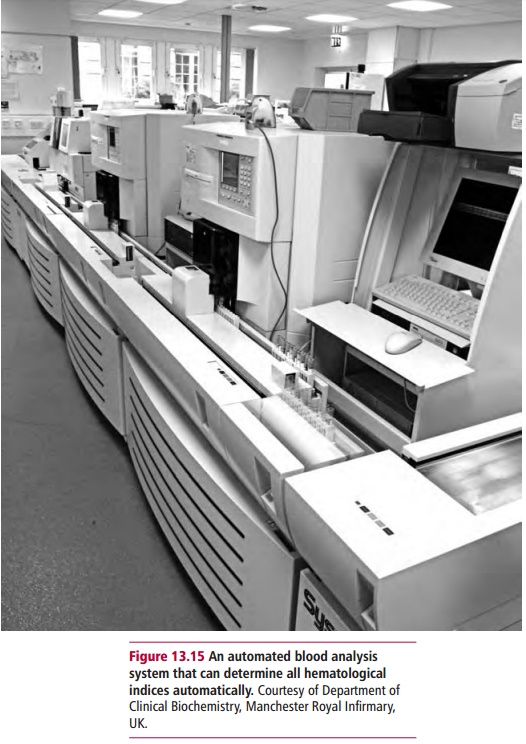 The three major types of anemias are the normocytic, microcytic and macrocytic, which are classified largely in terms of erythrocyte indices, especially their MCVs. Normocytic anemias, that is with normal sized erythrocytes, are associated with acute blood loss and a variety of disease states. However, the microcytic and macrocytic anemias are associated with observable changes to the sizes of erythrocytes in the blood sample and distinctive changes to the bone marrow appearance (Table 13.5). Thus the classification of anemias starts from routine hematological investigations. Their diagnosis involves taking a medical history and a clinical investigation of the patient, especially, of course, blood and marrow examinations to determine any changes in erythrocyte size. 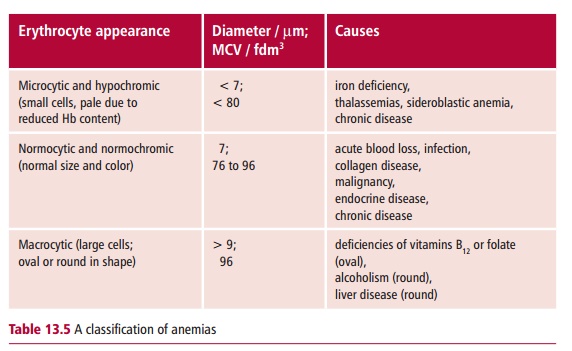 The major causes of microcytic anemias are iron deficiency, thalassemias, sideroblastic anemia and the anemia of chronic disease. Iron is difficult to absorb because of problems connected with the low solubility of its salts, its oxidation state, and interaction with other components of the diet. Loss of iron also occurs in hemorrhage and menstruation. 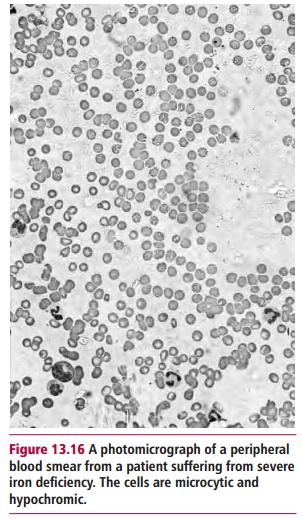 Iron deficiency anemia, the commonest cause of anemia worldwide, shows a number of characteristic features. The erythrocytes (Figure 13.16) are microcytic, with an MCV of less than 80 fdm3, and hypochromic, the MCH being less than 27 pg. There is variation in, cell sizes, anisocytosis and poikilocytosis, that is abnormal shapes, and a reduced reticulocyte count. There are also changes in the bone marrow, for example erythroid hypoplasia and decreased iron deposits. The serum iron decreases while the serum iron binding capacity increases compared with their normal concentration (Table 13.4). The transferrin saturation, that is the proportion of serum iron to its total iron binding capacity, falls below 19%, compared with a more usual 30% or so. The concentration of serum ferritin resulting from cellular degradation is regarded as the most reliable measurement of anemia. Patients may also show an impaired ability to maintain body temperature, depressed muscle function and abnormal thyroid hormone metabolism.

The underlying cause of the iron deficiency should be identified by the appropriate tests and taking a careful history of the patient. To counteract the deficiency, 600 mg of ferrous sulfate is given orally each day. If there are side effects, such as nausea, diarrhea or constipation, then ferrous gluconate may be substituted. Failure to respond to the treatment may be due to lack of patient compliance, continuing hemorrhage, severe malabsorption, or another cause for the anemia. It may be necessary to give iron parentally if absorption is defective, as for example in patients with ulcerative colitis or Crohn’s disease .

Macrocytic anemias are characterized by the presence of anemia and erythrocytes of variable shapes but with diameters in excess of 9 Lm and MCVs characteristically greater than 96 fdm3 (Table 13.4). The condition may be caused by certain liver diseases, including alcoholism, that produces large rounded cells or by megaloblastic anemia, which is associated with enlarged oval cells. The latter is also indicated by the presence of the erythrocyte precursors, erythroblasts (megaloblasts) in blood. The increased proportion of immature forms of all cell lines reflects the premature death of cells in the process of development (Figure 13.17). The cells are large, although there is a substantial variation in size, and they have large, immature nuclei. The basis of the problem is the inability to synthesize deoxythymidine monophosphate from methylated deoxyuridine monophosphate. The methyl group is supplied by the folate coenzyme, methylene tetrahydrofolate polyglutamate and deficiency of folate reduces its supply. A deficiency of vitamin B12 (Figure 13.18(A)) also reduces its supply by slowing the demethylation of methyl tetrahydrofolate. Thus deficiencies of vitamins B12 or folate or other defects, for example genetic ones, that affect DNA biosynthesis in the bone marrow, produce an asynchrony between nuclear and cytoplasmic development and a delayed maturation of blood cells and result in megaloblastic anemia. 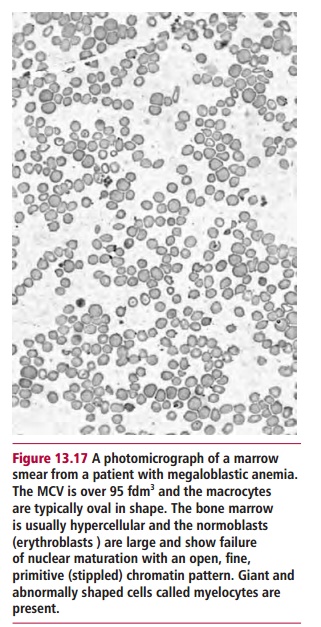 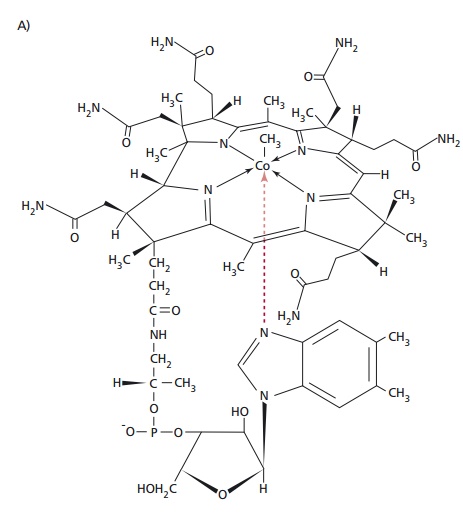 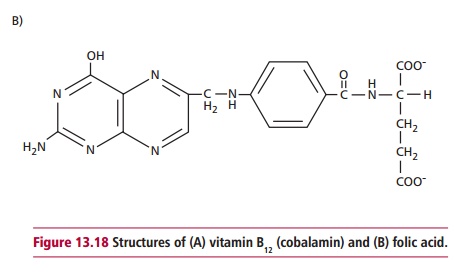 Vitamin B12, also called cobalamin, is found in animal products and is produced by certain microorganisms but not by plants. It is liberated from protein complexes by gastric enzymes and binds to a glycoprotein called intrinsicfactor. This is secreted by the gastric parietal cells alongwith H+ and carries vitamin B12 to specific receptors on the mucosal surface of the ileum. Although the vitamin enters the ileal enterocytes, the intrinsic factor remains in the lumen of the gut. Transport in the blood is by another protein, transcobalamin. Atrophy of the gastric mucosa and consequent failure to produce intrinsic factor leads to the malabsorption of the vitamin, whose deficiency results in pernicious anemia. Cytotoxic IgG antibodies directed against gastric parietal cells and/or against intrinsic factor are found in the serum in about 90% of individuals with pernicious anemia. In a majority of these individuals the antibodies are also present in the gastric juice and either prevent the binding of vitamin B12 to intrinsic factor or inhibit the absorption of the vitamin B12: intrinsic factor complex.

The onset of the disease is insidious with progressively increasing symptoms of anemia. Patients show achlorhydria, a low or absence of gastric acid secretion, and lack of secreted intrinsic factor. There may be jaundice because of excessive breakdown of Hb and because erythropoiesis in the bone marrow is deficient. The serum bilirubin may be increased and the serum vitamin B12 concentration is usually considerably below its physiological value of approximately 160 ng dm–3. However, the polyneuropathogical symptoms make it important that treatment is not delayed as they can become irreversible; patients present with symmetrical paraesthesia in the fingers and toes, an early loss of vibration sense and ataxia. Paraplegia may be the result. Pernicious anemia is predominantly a disease of the elderly with one in 8000 of the over 60 population being affected in the UK. It also seems to be associated with certain autoimmune diseases, such as thyroid and Addison’s diseases .

The causes of folate (Figure 13.18 (B)) deficiency are nutritional, for example a poor intake of green vegetables, such as broccoli and spinach and offal, alcohol excess, cancer, or excessive utilization in pregnancy and lactation and the use of antifolate drugs, such as methotrexate, phenytoin and pyrimethamine. The clinical manifestations of folate deficiency are megaloblastic anemia with a serum folate concentration that is lower than the reference value of 4 to 18 Mg dm3.

The deoxyuridine suppression test for megaloblastic anemia is performed by adding tritiated thymidine (3H-thymidine) to a sample of bone marrow. Bone marrow samples may be obtained by aspiration or by trephine. Aspiration, using a specialized needle, is usually carried out at the iliac crest with a local anesthetic. In normal marrow less than 5% of the 3H-thymidine is usually taken up, but in megaloblastic marrow up to 50% of it may be used. The microscopic picture of the bone marrow can be investigated by using the aspirate to make a smear on a microscopy slide. If a larger sample of bone marrow is required, the posterior iliac crest is used but a longer and wider needle is used to obtain a ‘core’ of bone. This core is fixed and decalcified over several days and then stained for microscopy.

It is important to distinguish pernicious anemia from other causes of megaloblastic anemia, such as folate deficiency, because this will affect treatment. However, this is usually clear from the blood concentrations of these two vitamins. Also, the ability to absorb vitamin B12 can be measured using the Schilling test in which patients are given vitamin B12 radioactively-labeled with 58Co. The urine is collected over a period of 24 h and the amount of radioactivity measured.

Vitamin B12 deficiency is treated by intramuscular injection of 1 mg of the pure vitamin, to a total of 6 mg over a period of three weeks. Oral administration is obviously unsuccessful in pernicious anemia because of the lack of intrinsic factor. A maintenance dose of 1 mg every three months is then given for the rest of the patient’s life. Clinical improvement may occur within a few days (provided that the neuropathy has not been long-standing) and a reticulocytosis is observed a few days later. Folate deficiency can be corrected by giving 5 mg of folic acid daily, and this usually produces a rapid hematological response. Prophylactic folate is recommended for all women during pregnancy and especially for women who have had a previous child with a neural tube defect.