Hemoglobin is the red-colored, oxygen-transporting protein in erythrocytes. Its Mr is about 64 000 and it is made up of four subunits, each containing an iron-containing heme group.

Hemoglobin is the red-colored, oxygen-transporting protein in erythrocytes. Its Mr is about 64 000 and it is made up of four subunits, each containing an iron-containing heme group (Figure 13.6). Each molecule can carry up to four O2 molecules. Oxygen is taken up as the blood passes through the lungs and is transported to all parts of the body allowing respiration, the oxidation of fuels, to occur in the mitochondria. The iron in the heme group of Hb remains in the ferrous (Fe(II)) state throughout. Should the iron become oxidized to Fe(III), methemoglobin is formed, which is incapable of carrying oxygen. This oxidation happens to a small extent continuously, so that normal blood always contains a few percent of methemoglobin. However, methemoglobin reductase, present in erythrocytes, constantly catalyzes its reduction back to Hb. The rare individuals with a genetic deficiency of this enzyme have severe problems and tend to be cyanosed unless they are treated with a reducing agent. 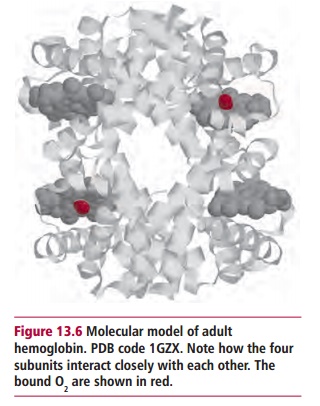 Hemoglobin was one of the first proteins to have its complete structure determined. Indeed, because Hb is so important medically, it is fair to say that more is probably known about Hb than any other protein. It is vital to life because the low solubility of oxygen in water means that insufficient amounts can be carried by blood in solution. The binding of O2 to Hb in erythrocytes increases the oxygen carrying capacity several thousand-fold. Furthermore, the body has a limited capacity to work anaerobically and so O2 is vital. Even a small reduction in the amount of Hb in the blood leads to anemia, which causes serious clinical problems. Anemia can result from there being too few erythrocytes or from each erythrocyte having too little or a defective Hb and this may be a consequence of a lack of iron. In all cases, medical treatment is usually necessary.

Hemoglobin molecules are roughly spherical with the four subunits fitting tightly together. The subunits of Hb are all similar and are in identical pairs. Thus, for example, adult Hb, referred to as HbA, can be described as α 2 β 2. Embryonic and fetal Hbs also occur. The heme groups are hydrophobic and sit inside hydrophobic clefts in the protein. The iron atom within each heme binds one O2 molecule and so Hb can successively bind four O2. The strength of this binding, that is the oxygen affinity, can be measured. In the lungs, where there is abundant oxygen, Hb should bind its maximum of four molecules and become saturated. In the tissues, the oxygen must ‘unbind’ and be released. The strength of binding is critical; too weak and Hb would be ineffective as a carrier, too tight and the tissues would not be supplied with oxygen because the oxyhemoglobin would not release its oxygen.

When an O2 binds to one subunit, it induces a small change in the shape of the protein making the binding of the next O2 slightly easier, that is, the strength of binding changes with each successive addition. The consequence is that the graph of oxygen bound against oxygen concentration, the oxygen binding curve (Figure 13.7), is S-shaped or sigmoidal. This means that in the lungs the HbA molecule can become nearly 100% saturated with oxygen but in the tissues can release almost all of it. 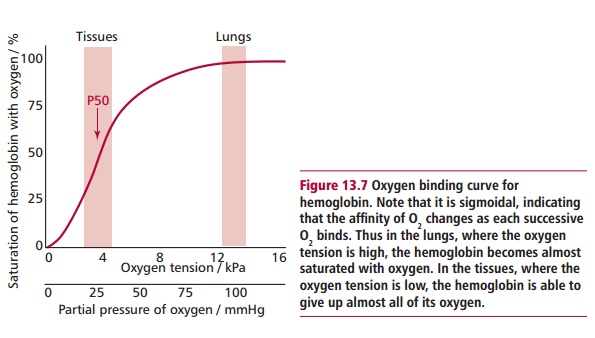 The embryonic and the fetal forms of Hb differ slightly from HbA. There are several types of embryonic Hb present early in embryonic life but at about 6 weeks there is a switch to fetal Hb (HbF). Fetal Hb has two α subunits, as in the adult, but two γ subunits, (α2 γ 2, and there are actually two types of γ subunit). The embryo and fetus obtain their oxygen from the mother’s blood in the placenta. Thus their Hbs need to become saturated with oxygen at lower oxygen tensions than maternal HbA so they can obtain it from the mother (Figure 13.8). This is possible because embryonic and fetal Hbs have a greater affinity for O2 than HbA. Adult Hb production starts shortly before birth and by 30 weeks of age it should have replaced all the HbF (Figure 13.9). 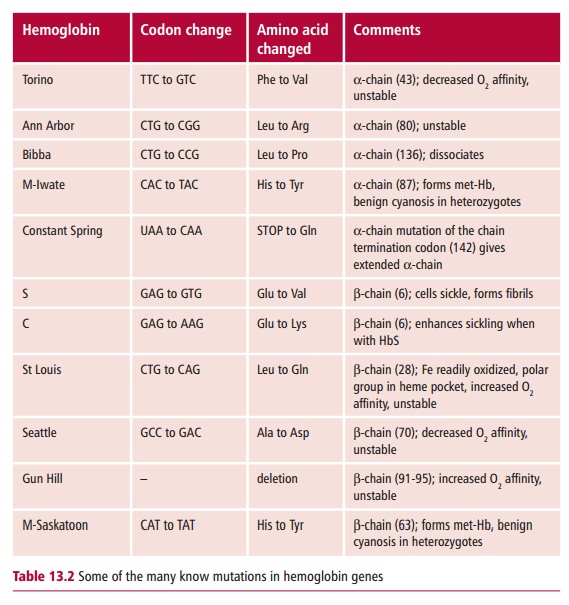 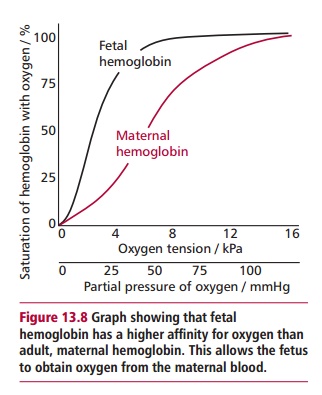 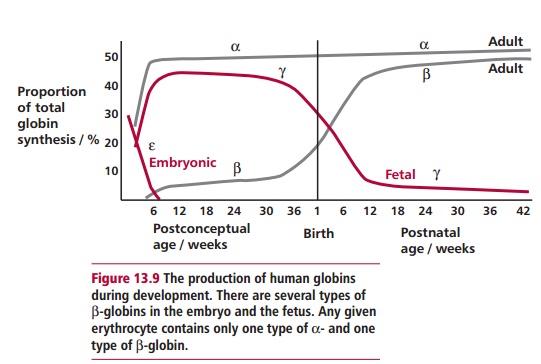