Perhaps the simplest form of learning is habituation—the decline in an organism’s response to a stimulus once the stimulus has become familiar.

Perhaps the simplest form of learning is habituation—the decline in an organism’s response to a stimulus once the stimulus has become familiar. As a concrete case, imag-ine someone living in an apartment on a busy street. At first, he finds the traffic noises distracting and obnoxious. After he’s lived in the apartment for a while, though, the noises bother him much less—and eventually he doesn’t notice them at all. At this point, he’s become habituated to the noises (Figure 7.1). 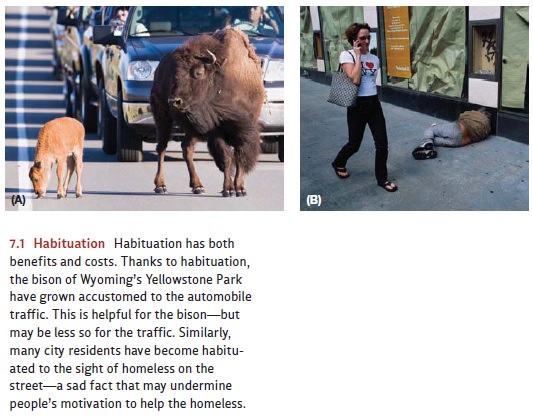 For the city dweller, habituation is obviously important. (Otherwise, with the traffic noise as it is, these people might never get any sleep!) But, more broadly, habituation produces a huge benefit: We want to pay attention to unfamiliar stimuli, because these may signal danger or indicate some unexpected opportunity. But, at the same time, we don’t want to waste time scrutinizing every stimulus we run across. How, therefore, do we manage to be suitably selective? The answer is habituation; this simple form of learning essentially guarantees that we ignore inputs we’re already familiar with and have found to be inconsequential, and focus instead on the novel ones.

Just as important as habituation is its opposite: dishabituation—an increase in responding, caused by a change in something familiar. Thus, the city dweller who’s seemingly oblivious to traffic noise will notice if the noise suddenly stops. Likewise, imagine an office worker who has finally gotten used to the humming of the building’s light fixtures. Despite her apparent success in ignoring this humming, she’s likely to notice immediately when, on one remarkable day, the humming ceases.

Dishabituation is obviously important because a change in stimulation often brings important news about the world. If the birds in the nearby trees suddenly stop chirping, is it because they’ve detected a predator? If so, the deer grazing in the meadow want to know about this. If the sound of the brook abruptly grows louder, has the water level suddenly increased? This, too, is certainly worth investigating. Thus, dishabituation serves the function of calling attention to newly arriving—and potentially useful—information, just as habituation serves the function of helping you ignore old news.

These simple forms of learning also provide powerful research tools for investiga-tors. As one example, consider that adult speakers of Japanese have trouble hearing the distinction, obvious to English speakers, between the words red and led. This is because there’s no equivalent distinction between these sounds in the Japanese lan-guage. But how did this perceptual difference between English and Japanese speak-ers come to be? In one experiment, 4-month-old Japanese infants heard the sound “la, la, la” repeated over and over. At first this sound stream caught their attention, but they soon habituated and stopped responding to the sounds. Then the researcher changed the sound to repetitions of “ra, ra, ra.” Would the infants notice the change? In fact, they did: The infants showed immediate dishabituation and once again oriented to the sound. Apparently, Japanese infants heard the distinction between these sounds as readily as infants in English-speaking countries did. This seems, therefore, to be a case of “use it or lose it”: All infants, no matter where they’re born, can hear this acoustic difference. However, if the sound difference is not rele-vant to the language in the infant’s surroundings (as, for example, in the case of Japanese), the infants stop paying attention to the distinction. By the time they’re 12 months old, they’ve completely lost the ability to tell these sounds apart. This is on its own an important finding, one that sheds light on how perception can change as a result of experience and helps us under-stand one aspect of language learning. But, for our purposes here, notice that this research relies on habituation and dishabituation as a means of finding out what sounds different to an infant and what sounds the same. Thus, these simple phenom-ena of learning provide a straightforward way to explore the perceptual capabilities of a very young (preverbal) child.