Functions and Structure of Digestive System 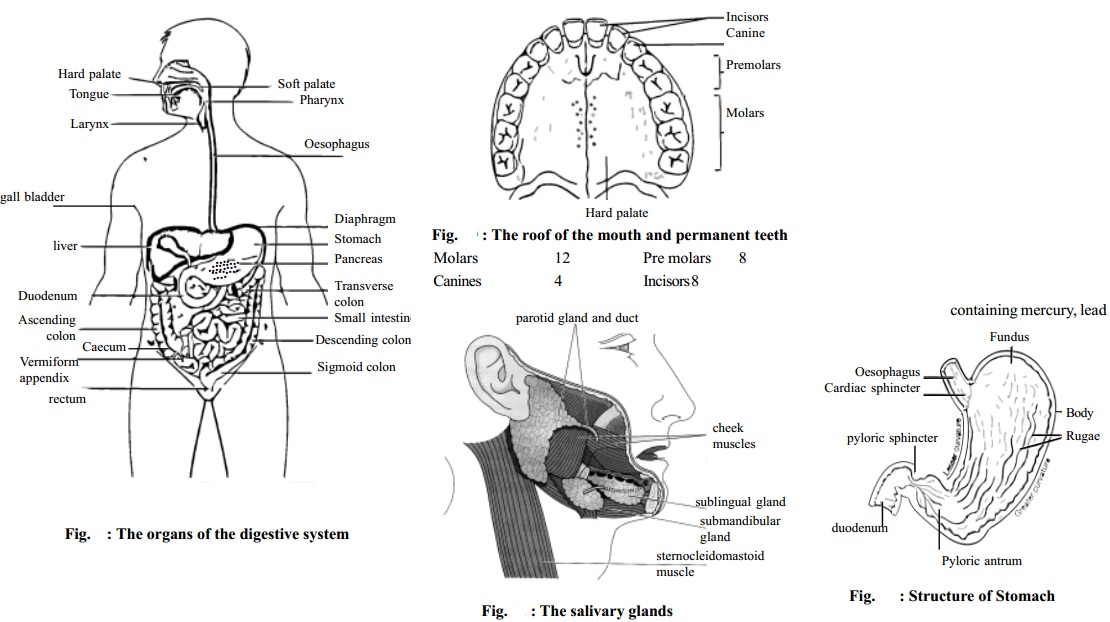 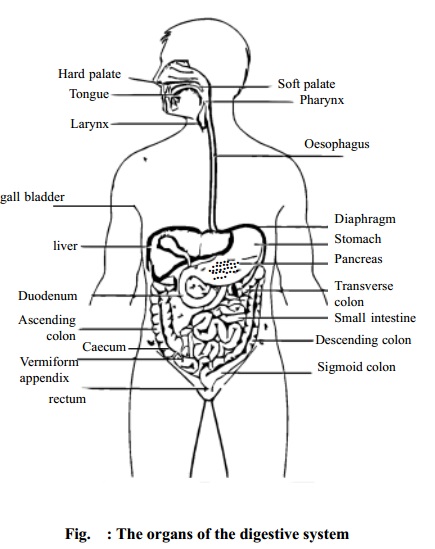 1.     Break down the food substances into small particles.

The digestive system may be divided into two groups of organs:

The alimentary canal which is a continuous passage way beginning at the mouth, where the food is taken in and terminating at the anus, where the solid products of digestion which are not absorbed are expelled from the body.

The accessory organs such as salivary glands, pancreas, liver and biliary tract which are vitally necessary for the digestive process, do not happen to be the part of the alimentary canal.

The alimentary canal is a long muscular digestive tube extending through the body. It is about 750 cm in length. It consists of the following parts.

The gastrointestinal tract consists of a tube composed of four principal layers. From outside onwards:

Tunica Adventitia or serous coat - in the abdomen the organs are covered by a serous membrane called peritoneum.

The mouth is also called the oral cavity. In the mouth there are about 32 teeth. They are:

The teeth helps to break down the food substances into small particles. Into this space there projects a muscular organ called the tongue. It helps in chewing and swallowing and is one of the principal organs of speech. The tongue has on its surface a number of taste buds by means of which we can differentiate sensation of taste (bitter, sweet, sour and salty).

In chewing, the teeth grind the food into pieces while the secretion of saliva moistens and lubricates the food. 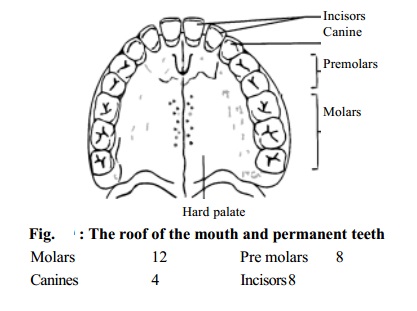 Saliva is a juice secreted by three pairs of salivary glands in the mouth. They are (a) the parotid (b) the sub-mandibular and (c) sub-lingual gland.

Parotid -  located in front and below each external

b. Sub-mandibular - located between the mandible and the

muscle of the floor of the mouth.

c. Sublingual - located in the floor of the mouth.

Salivary secretion is a reflex process, both conditioned and unconditioned reflexes are involved. A new born infant salivates when food is placed in its mouth. But the sight and smell of food does not produce any reaction. Later by associating the sight and smell of food with its taste, the child learns that the food has certain qualities and these very qualities are afterward capable of eliciting salivary secretion. 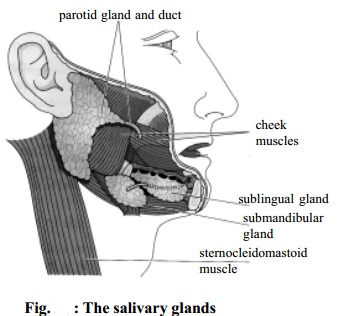 2.     It helps in the process of mastication of the food stuff and in preparing it into a bolus suitable for digestion.

3.     It dilutes hot, irritant substances and thus prevents injury to the mucous membrane.

6.     It helps heat loss. This is mainly found in animals. When they become hot, more saliva is secreted causing greater heat loss.

7.     It helps in the excretion of certain substances like drugs containing mercury, lead and iodine.

The Oesophagus is a tube connecting the pharynx and the stomach. It conveys the food from the mouth to the stomach.

The stomach is an enlarged section of the alimentary tube. The stomach is divided into three regions: the fundus, the body and the antrum. Both ends of the stomach are guarded by valves which normally permit the passage of substances in only one direction.

The proximal end is guarded by cardiac sphincter and the distal end of the stomach is guarded by pyloric sphincter. Stomach acts as a pouch for holding large quantities of food so that frequent feeding can be avoided. The stomach mixes up the food thoroughly by its movements. It also destroys bacteria by high acidity. 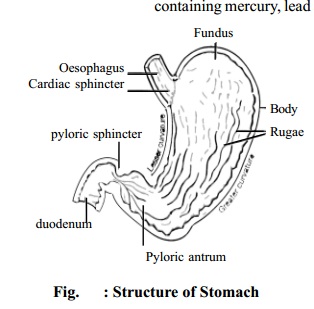