Fouling is a problem with the use of heat exchangers in fish farming.

Fouling is a problem with the use of heat exchangers in fish farming. This occurs particularly when using outlet water on one side in the exchanger, but there are also problems associated with using sea-water on one side. Fouling of the transfer surfaces will reduce the value of k and the heat transfer. Fouling will cover the transfer surfaces, and the conduction through the layers of fouling is dra-matically reduced compared to surfaces with no fouling. Since fouling occurs normally and it is impossible to remove it continuously, this must be taken into consideration when designing heat exchangers for use in fish farming. This is done by including the fouling factor (Rf) in the calculations which again decreases the value of k .

It is important to reduce the amount of fouling as much as possible, but of course within economic limits. Washing of the surfaces will reduce the fouling, whether by the use of chemicals, manual brushing, or both. To make chemical washing pos-sible in a simple way, the exchangers should be equipped with a backwashing circuit (Fig. 7.11). For the washing procedure the heating system is stopped and the exchanger backwashed several times with water containing a detergent: caustic 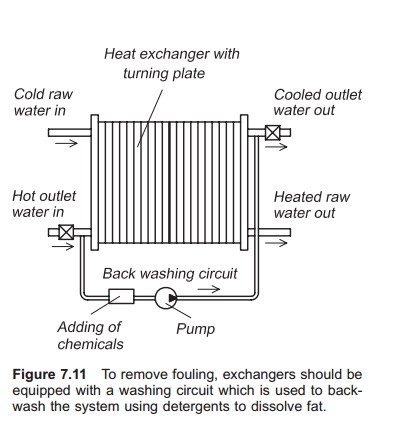 soda or lye may be used as a detergent in fish farming. Chemical washing, however, is normally not enough and the exchangers have to be opened and the heat transfer surfaces brushed manually. It may not be necessary to do this every time, but only for some of the washings, for example once a week. This of course depends on the degree of fouling which varies with the characteristics of the water flowing through the exchanger, i.e. whether it is new water or outlet water.

When cleaning the exchangers the heating system must be switched off. Because of this, it can be advantageous to have at least two exchangers, so at least half the heating capacity is functioning during the cleaning procedure. It is important to have enough valves in the pipelines to be able to change the flow direction to permit this.

Fungus clots and larger particles may block the exchanger totally. To reduce the risk of blockage, for instance when using outlet water, the water must always be filtered before entering a heat exchanger. This will to some extent, also help to reduce the amount of fouling. A particle removal filter, for instance a rotating screen filter, is commonly used for this purpose.